What fish can I keep in my small tank? Top six fish for your nano aquarium 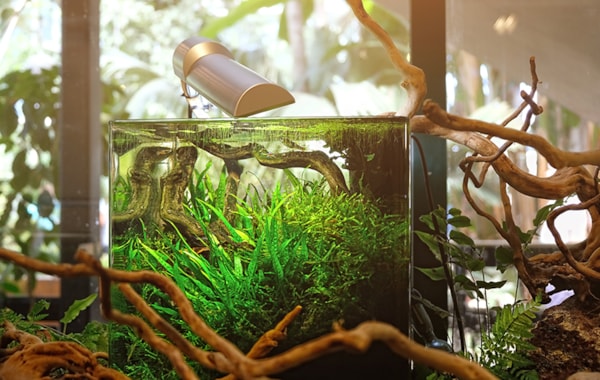 The show stopper – Betta splendens, better known as the Siamese fighting fish or just Betta. They’re a good size fish for such small aquaria – very visual, not to mention the colours. The downside is that one fish is all you get. Bettas are best kept alone – not just from other Bettas but from other fish too. Some individuals are grumpy and aggressive to small tankmates; some are timid and can even be picked-on by smaller, faster fish.

However, the presence of a single Betta leaves few fishkeepers wanting. Cherry shrimps are often kept alongside Bettas. They are ideal tankmates as long as you don’t mind the distinct possibility of the shrimp breeding and some of the young being eaten by your Betta.

It’s not just fancy Bettas which can be kept. Wild strain Bettas are also stunners and appeal to those with more subtle tastes. But any Betta requires a secure lid to stop them jumping out. For more Betta tips see: www.practicalfishkeeping.co.uk/features/frequently-asked-questions-on-siamese-fighters

The colourful one – The stunning colours of a Betta can be matched and even surpassed by a group of fish known as killifish. Again, they aren’t ideal for keeping with other fish, but you can keep them in numbers of single species or, in some cases, with different species of Killifish.

Most common are those from the Aphyosemion and Nothobranchius genus’, many of which demand at least moderately soft water conditions but, for small aquaria, this is easy to supply. Filtered rainwater or RO water can be mixed with harder tap water if needed.

Naturally, they live in small habitats – some are even found in puddles made by elephants footprints in rainforests! They also have some fascinating breeding techniques and a lot of character. Like Bettas, a secure lid is needed to keep them in your aquarium.

The cute one – If you’re after a tiny fish you will want to pick-up and hug, the Scarlet badis, Dario dario, is the one for you. Just don’t pick them up and hug them, ok!

Their appearance, jerky movements, big bright eyes and full size of just 12-20mm make them incredibly endearing. They are also adaptable to a wide range of water conditions but do prefer a longer tank of around 45x25x25cm+ with plants or botanicals creating hiding spots.

Other small and calm fish can be kept alongside Scarlet badis including Rocket panchax, Epiplatys annulatus, and Micro rasboras from the genus Boraras but a tank of 60ltrs+ would be needed to mix them.

The pretty one – Visually the Sparkling gourami, Trichopsis pumila, is delicate and elegant – adorned by electric blue sparkles with a contrasting red edge to their fins. Their movement and character are equally graceful, though males can become competitive occasionally.

A well-planted tank offers cover to limit competitive behaviour and instil confidence. They can be kept alongside other small and delicate fish like Pygmy corydoras, Corydoras pygmaeus, Green neon tetra, Paracheirodon simulans and Scarlet badis – when tank size allows.

A secure lid is advised. Not due to a jumping tendency, but because of a special breathing organ that requires warm and humid air above the water. This organ (labyrinth organ) is shared with Betta species.

The cool one – The Golden medaka, Oryzias latipes, is a subtropical species, happy at 16­-22°C so there’s no heater required. There’s a growing interest in breeding highly coloured varieties (as is seen with guppys), but they haven’t reached UK shores yet – at least, not in any numbers.

They are undemanding fish to keep, being happy in mildly acidic to mildly alkaline conditions. Their best colours are displayed in heavily planted tanks with a dark substrate. Roots, bogwood and a little leaf litter, are also appreciated.

The rare one – Not naturally rare, the IUCN lists it as of least concern, but you won’t find the Everglades sunfish, Elassoma evergladei, in many shops around the UK.

They are a calm and reasonably timid species – one for the patient aquarist. But a real treat to the eye when you’re sat quietly for several minutes by the tank.

Naturally, they inhabit overgrown ditches, and a similarly styled tank is needed. A heavily planted tank is ideal but don’t make it too bright. Hornwort, Ceratophyllum demersum, is an ideal plant for a low-light plant tank and suits the un-heated set-up needed by the sunfish.