We answer some of your FAQs about Betta splendens â€” the Siamese fighting fish.

Can I mix fighters with other species of fish?

We don’t recommend it. Betta splendens need still, warm, soft water so that’s going to rule out some tank mates.

They are also known for their aggression, so should not be combined with anything with flamboyant coloration or finnage they can pick on – such as male guppies, for example.

The long finnage of most males is also too tempting for other fish to try and nibble — even species not known for nipping, like Neon tetras and dwarf gouramis.

Keep fighters on their own in a heavily planted tank and they will be very happy. Larger freshwater shrimp like Amano shrimp might be OK with them. 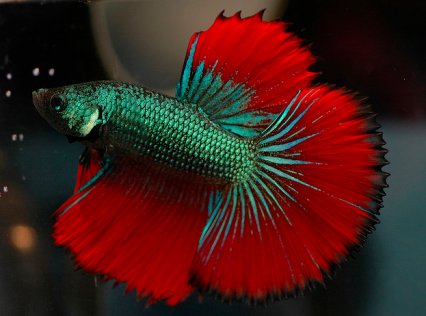 What is the smallest tank that I can keep them in long term?

Adults all over the world are kept and bred in glass jars, though we recommend a heated, filtered aquarium of at least 25 l/5.5 gal capacity, which is about 30 x 30cm/12” in size.

Body size of an adult averages 5cm/2” though they are not particularly active fish, preferring to hang around under floating plants.

One variety, Giant, can grow considerably larger and would need a 60 x 30cm/24 x 12” aquarium to reach full size potential.

One aquarium design that may appeal to both you and the fighters is a shallow tray style, wider and longer than tall. Imagine a 60 x 30cm/24 x 12” wide aquarium, but only 10cm/4” tall! This is the best depth for breeding them and you could add marginal plants that grow out of the water. 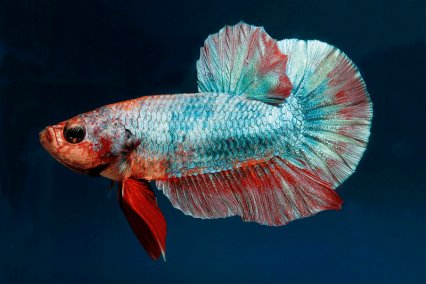 I’ve heard that many tanks of females are actually males. Is this likely?

Unfortunately yes, and that’s through no real fault of the retailer either, as these fish have been imported as females but then turn out to be males.

This has only become possible as more short tail male fighters, known as Plakats (pictured above) have become available at the same time as much more colourful females. To prevent this happening observe the fish closely. Mature females are usually round in the belly with eggs, so find a member of staff who really knows fighters and, if in doubt, don’t buy.

Do I need special foods?

No. Many companies market specialised diets, though most thought has gone into quantity and dispensing the product than the food itself.

In the wild their diet comprises insects, aquatic invertebrates and insect larvae. In the aquarium they relish Daphnia, Artemia, bloodworm, black mosquito larvae and glassworms. Juveniles can be raised on whiteworm cultures.

Dry foods are also accepted, so offer flake, Tetra crisps or small granules, though a varied diet is best. Don’t overfeed and buy small quantities of foods at any single time to maintain freshness.

What is their natural habitat?

As they can breathe air they can survive in more extreme habitats than other species. 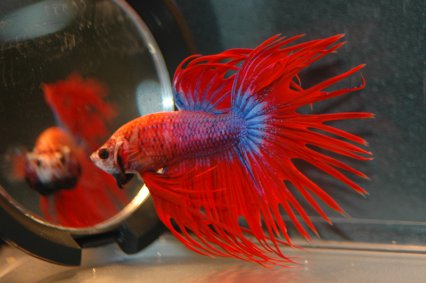 Are their tails really meant to look ragged?

For one variety — the Crowntail (pictured above by Daniella Vereeken, Creative Commons). These have been bred to look that way and on a good specimen the lobes will become pronounced twin prongs. That appearance, however, is not to everyone’s taste.

If it hasn’t been sold as a Crowntail the fins should be whole and without splits or holes.

Will males really fight to the death?

They will have a go at each other and a couple of days of fighting could end in the death of the weaker opponent.

The original fighting fish is a blunt-nosed, stocky, short-finned version, called a Plakat and they are still used for fighting in Thailand where sizeable cash bets can be placed on the outcomes.

These hardened fish are what pitbull terriers are to dogs, being bred for strength and aggression. Our ornate versions wouldn’t last two seconds against those brutes.

What should I look for when buying a Siamese fighter?

They need to be alert and active.

Choosing your retailer is also important, as fish kept in the wrong conditions will quickly lose condition and become weak.

Ideally all fish should be kept in a purpose-built system on their own, in the warm and without too much water circulation. If looking for males take a small mirror and show the fish its own reflection.

It should raise its fins immediately and turn square on to meet the perceived challenge.

The posture will also let you check the condition and fins of the fish.

More sellers are stocking higher quality fish and although you pay more you get a better quality fish. Look online too for specialist breeders and sellers. 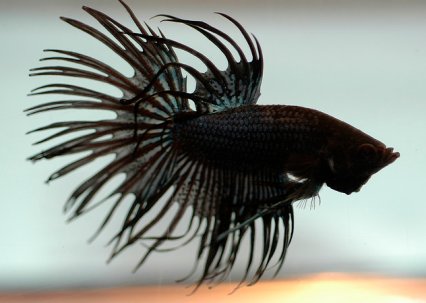 What colours are available?

Male fighters are highly variable and now virtually any colour can be produced from red to orange, blue, purple, black (pictured above by Daniella Vereeken, Creative Commons) and white. You can even get a white-fringed version which is called a Butterfly.

There are also some strange colours and these include marble, piebald, multicolour, metallic, copper, Cambodian, green and even mustard gas (a kind of off-yellow). 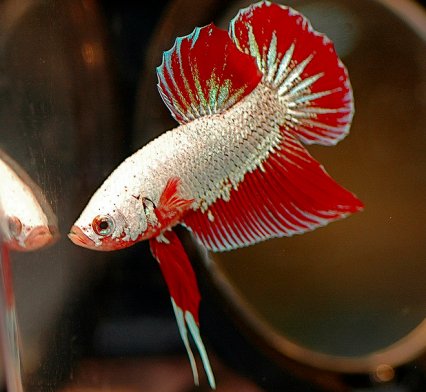 Because fighters are ornamental fishes new tail types could be developed all the time. The most common, are the Veiltail (the common long-finned Siamese fighter, though really a poor quality half moon), Half moon, Plakat, Crowntail, Double tail, Delta tail and Super delta tail. Then there are Combtail, Spade tail, Pintail, Round tail and Rose tail.

You’ll need a specialist to source most of them, though.