Hard corals are getting easier to keep due to improved technology and a better understanding of the requirements of reef organisms. We look at what you need.

Hard corals are the inverts of the moment, yet many still have problems keeping them. They are much more colourful than soft corals and named because they build a hard skeleton which remains after death. These then become building blocks of coral reefs.

How do they differ?

Imagine any reef structure in shallow, sun-drenched water and you are probably thinking of a reef of SPS corals. These are the proper reef-builders and shapes range from staghorn and branching shapes to discs and flat, table corals.

You rarely see the polyps with small polyp stony corals. Instead their structures are covered in a thin ‘skin’ of living tissue. SPS skeletons are dense and feel heavy.

The corals put down these calcium carbonate skeletons as they grow, increasing surface area to be exposed to sunlight for energy and water flow to bring food and wash away waste.

SPS corals rely heavily on sunlight on the crest of most reefs. Their skeletons are adapted to best utilise strong water flow conditions, though in storms or collisions these break easily.

In nature, even if heavily damaged, an SPS can continue growing, with living tissue dying off in the broken part, amid less favourable conditions of the reef floor, and the remaining part left to re-grow.

The broken skeletons fuse together with calcium deposits, making a new structure for other corals to grow on top. This is the cycle that builds a reef.

LPS corals are far less numerous. They also have small skeletons yet large volumes of tissue growing on top, and also use inflation with water to help hold their shape. 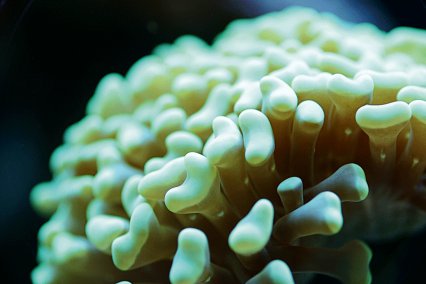 LPS corals generally rely less on sunlight and they use their large polyps to trap more food, like zooplankton. When fish are fed in an aquarium, LPS often feed at the same time and their polyps trap food like Artemia.

This also means that LPS occupy different areas of the reef. They commonly live much deeper, in less well-lit, different currents or in shallow lagoons and seagrass beds, with less flow and occasional turbid water.

Much information says that hard corals are more difficult to keep in a reef tank than soft corals — and, of the hard corals, LPS are easier to keep or less difficult than SPS.

In terms of water conditions all tropical reef corals require the same parameters. Salinity will vary, with the Red Sea having higher than normal salinity — yet natural seawater, referred to as NSW, has the same parameters of pH 8.2, calcium 425ppm, magnesium 1300-1500ppm and alkalinity levels of 8 dKH.

Get temperature, specific gravity and the other parameters listed above right, and, with appropriate light and water flow and low organics like nitrates and phosphates, all soft, LPS and SPS can share the same water.

What makes one type more or less easy than another is tolerances. When it comes to those, and reefkeeper mistakes or laziness, soft corals are the most tolerant and will survive longest in conditions far from those of natural seawater.

Of the hard corals LPS are next, with species like Bubble corals, Plerogyra spp., being hardier than others. SPS corals are the least tolerant and if you can’t provide premium conditions they will quickly perish.

SPS corals are least tolerant of nitrates and phosphates, which must always be close to zero. They are the most demanding of strong light and strong water flow, are poor at fighting off more aggressive corals and very intolerant of warmer than normal water temperatures.

In the average neglected or poorly understood reef aquarium SPS will die within days of being added. LPS will last for weeks and soft corals months or years.

Because of their differences in light, flow, reef habitat, feeding and aggressiveness, LPS and SPS corals shouldn’t be kept together.

Few tanks are large enough to dedicate different zones of light colour temperature and flow patterns, so have either soft corals, LPS or SPS, and provide conditions particular to them. 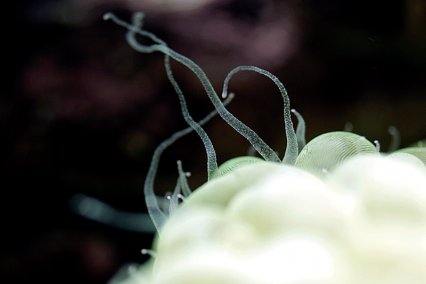 LPS and SPS can loosely be described as having different morphology and requiring different care and conditions, though there are other differences.

If placed in areas where the polyps and tissue can actually touch, corals of different species will sting each other, releasing chemicals or, in some cases, eating each other.

The natural reef is a battleground with space and food at a premium. It is kill or be killed. Corals must arm themselves to fend off anyone else who wants to live where they live, use their light and take their flow of food.

For reasons unknown LPS have a more powerful sting than SPS, delivered mainly by long sweeper tentacles mobilised on demand and stretching much further than standard polyps.

After anemones, LPS corals have the most powerful stings of aquarium corals and the most aggressive tendencies. SPS corals are the least aggressive and often live close together in nature. This has clear advantages in the reef aquarium.

There has never been a better time to keep hard corals and at last our inverts can be as colourful as our fish. Most SPS corals are even cultured, so in theory you could have a coral collection that has not impacted on the ocean.

How can I get started?

Make sure that your water parameters are right and then match your lighting and flow to either LPS or SPS corals.

Increasingly, SPS coral tanks have a more open rock structure for better water flow and LPS coral tanks have lots of sandy areas for sand-dwelling species. LPS also need to be spaced out in the aquascape so that they don’t sting each other.

Next choose some easy species — with the Bubble coral being the easiest LPS and Montipora capricornis the easiest SPS.

Practice by keeping either species first, and, if after a few months they are thriving, add more SPS and LPS. 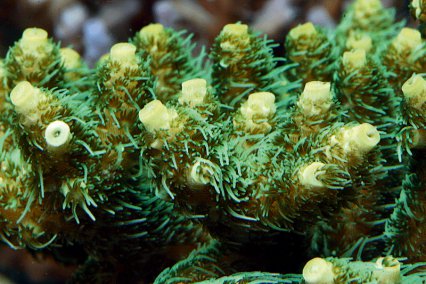