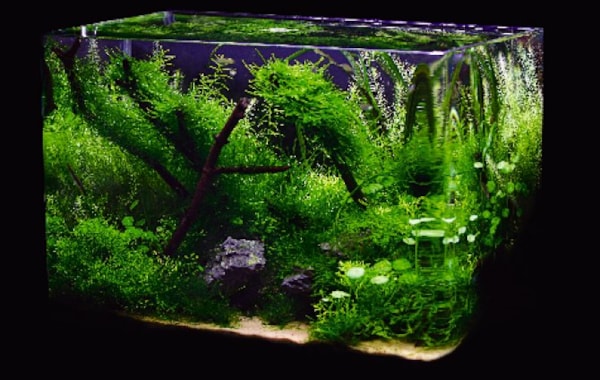 George Farmer takes a look at a wonderful aquascape that holds just 25 litres!

This great little aquarium won the junior category in the PFK Aquascaping Contest and was created by the talented Tom Messenger who was just 17 at the time.

These photographs were taken some time after that winning contest and the good news is that aquascape looks even better now! What impressed me most about this layout was its very natural and wild-looking appearance, almost to the point of being overgrown.

The combination of wood and rocks provide a perfect framework to build on and the significant use of mosses enhance the overall aged feel.

The use of fine textured plants all contribute to the incredibly effective sense of scale — fooling most enthusiasts who see pictures into thinking it’s much larger than its 25 l/5.5 gal volume.

Tom entitled the aquascape "At Forest’s Gate" and it is highly appropriate. The open sand foreground blends very well into the full forest background, with the contrast around the centre creating the gate.

He is clearly influenced by Takashi Amano’s nature aquarium style and the amazing thing is that he’s mastered the skill so well at such an early stage in his aquascaping career.

Tank and lighting
Tom’s aquarium is an Aqua One Mirage 40 (40 x 23 x 27cm/16 x 9 x 11”) with rounded front corners — an attractive feature as no ugly silicon is visible. Lighting is by an Interpet 24w Power Compact (PC) T5 unit with Triplus bulb and modified T8 reflector.

Photoperiod is set to ten hours using a plug-in-timer. With almost one watt per litre this is sufficient lighting to grow any plant species, especially combined with the good CO2 and other nutrient levels in Tom’s tank.

Filtration and water
Tom used an Elite Mini internal filter with a flow rating of 220 lph. He found it very effective for such a small filter, but intends to use an external canister filter with glassware outlet and inlets for his next project.

Tom doesn’t use any form of chemical filtration such as carbon or phosphate remover. To soften water he adds rainwater to his tap, but says he would prefer to use RO if he had a unit because of the potential pollutants in rainwater. Half the water is changed every week.

CO2 and substrate
A JBL pressurised CO2 system is used with built-in solenoid that turns off the gas at night. The diffuser is the glass/ceramic type that emits a steady flow of microbubbles dissolved efficiently into the water.

Being glass, these are attractive yet subtle additions to the aquarium. A glass bubble counter is used to monitor CO2 dosage rate  and is set between one and two per second.
The substrate is ADA Aqua Soil Malaya that is almost as rich in nutrients as the Amazonia variety of Aqua Soil. Silver sand was used for the open foreground area.

Tom says that he likes Aqua Soil as it is easy to slope towards the back of the aquarium and won’t slip, unlike many other substrates. This allowed him to build up the back of the aquascape and give it a true sense of depth. The back was about 10cm/4" in height, sloping down to as low as 0.5" at the front, where it joined with the sand. 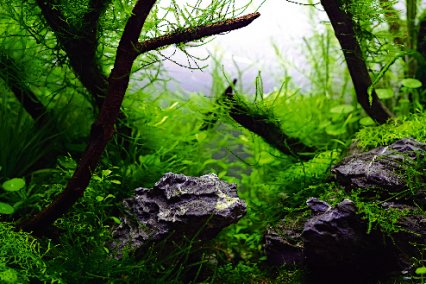 Fertilisation
Tom used three ADA liquid fertilisers for this tank. One millilitre of Brighty K was added every day for the first three weeks. This only supplies potassium and also acts a dechlorinator. After that time a 1ml measure of Brighty Green Step 1 was dosed every other day. It is a trace elements mix designed for newly set up aquaria.

A couple of weeks after that he began with 1ml of ADA Brighty Special Lights on the same day of the week as the Step 1. This is an NPK (nitrogen, phosphorous and potassium) additive which includes some trace elements.

Hardscape
The main décor used in Tom’s aquascape were Mini Landscape Rocks and wood collected near the Lake District. Tom boiled the wood several times to remove tannins, but it still didn’t sink. Eventually he had to tie slate to the bottom of each piece to hold it in place in the substrate.

I’m a big fan of Mini Landscape Rock and have used it in some six of my own aquascapes as it creates an immediate natural feel to the layout with its interesting colour and texture. I expect to see more of it in future Great Planted Tank features too!

Plants
The two most dominant plants are the Vesicularia dubyana 'Christmas' moss and submerged Riccia fluitans. Tom says these were used to give the layout the aged and wild look he was aiming for. Growing into the moss and Riccia is Hydrocotyle verticillata and Glossostigma elatinoides. These species have a fairly similar leaf shape and provide a nice contrast to the moss and Riccia.

In the background two stems species were chosen, Didiplis diandra and Mayaca fluviatilis working together to contribute to the forest look. Finally, the tall Cryptocoryne balansae gives contrast to the rest of the composition with its leaf shape being different to any of the other plants in view.

Livestock
Tom chose Emerald eye rasboras (Rasbora dorsiocellata) to be the main display fish as they are fairly plain yet still contribute to the aquascape with their colourful eyes.  He explained that he didn’t want anything too bright, like Cardinal tetras, as they would have diverted too much attention from the plants.

Fishkeeping cv
Name: Tom Messengerâ€¯
Age: 18
Home: Near Ipswich, Suffolk
Time in hobby: "I‘m relatively new to the scene as I only set up my first planted tank in 2006 with a standard Juwel Rio 125 and a selection of plants from my local shop.

"It didn’t go well so I looked further into keeping plants in the aquarium. This led to getting involved in various Internet forums and trying different plant substrates and fertilisation techniques.

"I soon found out about Aqua Design Amano and got hooked on the nature aquarium style. This was my first serious aquascape in the style using ADA products and it was set up at the beginning of summer 2007.

"The formation of the UK Aquatic Plant Society (www.ukaps.org) has been a big influence and inspiration, and I hope we can continue to increase the awareness and popularity of the planted aquarium hobby in the UK."

This item first appeared in the May 2008 issue of Practical Fishkeeping magazine. It may not be reproduced without written permission.