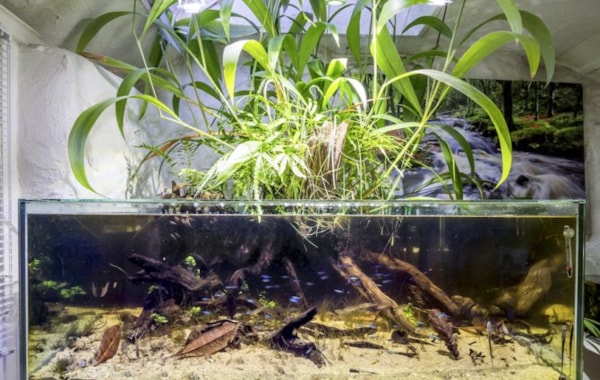 This natural-looking, open-topped tank with its emergent plant growth is just fantastic!

Fishkeeper: Tom Black (forum name BigTom).
Age: 31.
Occupation: PhD student, LFS assistant and occasional photographer.
Whereabouts: Cornwall.
Time in the hobby:
I often had tanks as a kid but got back into the hobby about nine years ago.
Number of tanks: Currently just one large display tank and three 'nano' cubes, mainly used for growing on plants and fry. 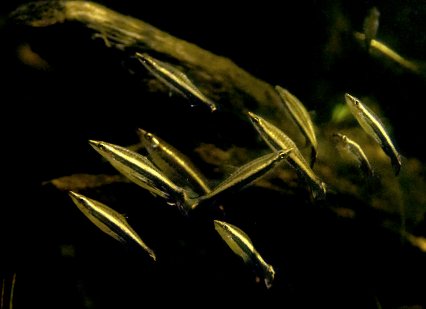 I grew up in the Pacific and spent a lot of time snorkelling coral reefs, so it’s pretty much always been an interest. 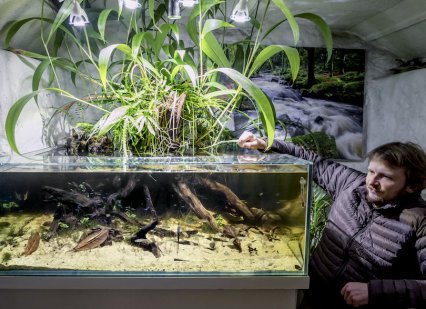 Low tech, open topped, semi-naturalistic planted tanks with a high plant biomass and/or plenty of emergent or riparian growth. My current display aquarium is a loose Venezuelan biotope, which is relatively bare in terms of submerged plants as I wanted to emphasise the hardscape, but previous incarnations have been absolute jungles.

Probably Liquorice gouramis Parosphromenus sp. They’re just the most beautiful, intimate and rewarding fish to watch go about their business.

Recently the Iguanadectes gave me trouble, as they’re the first fish that I’ve had problems with jumping out of the open topped tank. Some tactically placed corner covers seem to have done the trick however — or perhaps they just needed to settle in a bit. Either way they’ve now stopped, which is a relief.

I find most fish to be fairly straightforward as long as you give them vaguely appropriate water parameters and housing  — and lots of plants! I was surprised at how easy Armoured sticklebacks, Indostomus paradoxus, were to keep; they fed almost entirely on natural micro-fauna in their little nano tank and periodically produced fry without any input from me at all. 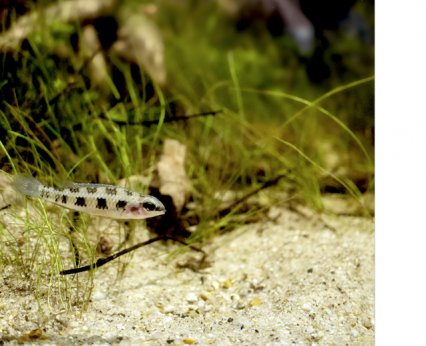 What is your favourite plant?

I love Microsorum pteropus 'Trident' — very undemanding, bright green under any light and adds brilliant texture to a tank. Hydrocotyle tripartita is another favourite, as are my newly acquired Bucephelandra. I must also mention being a huge fan of pretty much anything that can be grown as a floating or riparian plant as they do wonders for water quality and are the key to my ultra low-tech approach to fishkeeping.

Green darter characins, Ammocryptocharax elegans — they only crop up rarely but I’m desperately after some for my Venezuelan biotope. Also, Parosphromenus again! I never quite got them to breed when I kept them previously, so there’s an itch there that still needs scratching.

Ludwigia sediodes; I tried it last year and it did well for a while but failed to over-winter. It’s such a stunning floating plant that I’m not willing to admit defeat just yet.

What would be your idea of a dream aquarium?

Something massive! There’s something really special about large aquaria, when you get to a certain size you find that different fish really utilise different areas of the tank and the overall impression somehow shifts from being 'fish soup' to feeling like a real, structured habitat. I think from 500 l/110 gal upwards you really see this, but not if you fill the tank with massive fish. It’s all about big groups of small fish for me. 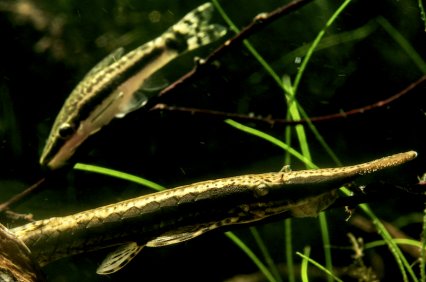 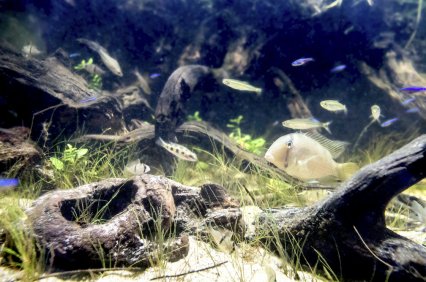 You can easily save money on equipment and hardscape, but don’t skimp on quality flora and fauna. I once wiped out about 300 shrimp after buying cheap pesticide-covered plants from the Far East — never again.

Prepare to pay good money for healthy stock and you’ll be much less likely to run into problems.