There's an art to creating authentic tanks and Tom Austin has not only mastered it, he's winning awards for it! We check out some beautiful biotopes.

As biotope fever continues to tighten its hold on the UK, it’s invigorating to see ever increasing numbers of aquarists embracing the concept. Though community tanks remain unyielding in their place as a domestic favourite across the land, fishkeepers like Tom Austin are seeking out new sources of information, forging contacts from regions that go beyond the local retailer and using it all to create displays with an outstanding blend of aesthetics and fishy happiness.

Tom, a 25-year-old chef from Oxford, has a simple and direct ethos with his livestock. "If you’re keeping a fish," he says, "keep it the way it’s supposed to be kept." 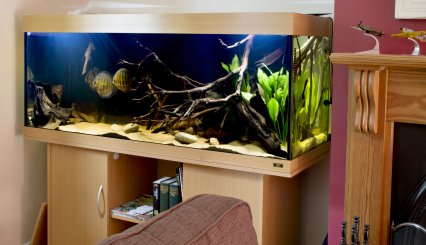 The first tank that catches our attention is his majestic Juwel Rio 400; a 151cm/60cm slice of dark and moody South American river. Inside, we see the telling flashes of burnished yellow with coloured streaks that indicates that this is a home for discus. As the photographer sets up his flashes to begin shooting, the discus, true to form, slink themselves out of sight behind tangles of wood.

Biotopes aren’t how Tom started out in this hobby. Three years back, when he began, he inherited a small tank from a friend. It turned out that this housed a rambunctious tankbuster — a Red-tailed catfish, no less — and Silver sharks, both woefully ill-suited for this tiny home. The fish were eventually rehomed by a sympathetic Maidenhead Aquatics. However, Tom persevered.

When a partner at that time moved out, a bigger tank moved in. Tom’s bedroom was, for a while at least, the residence of a 90 x 60 x 60cm/36 x 24 x 24in tank, which he established as a classic community with tetras and gouramis.

But this is the digital age, and certain influences have their ways and means of finding a route into a person’s home. On Facebook, Tom stumbled upon another prolific biotoper, Hamza Poonawalla. Soon after, he was flicking through Ivan Mikolji’s (a Venezuelan field explorer) nature videos. It didn’t take long for a purist seed to germinate, and now Tom boasts not one, but three biotopes in his home.

As we turn our attention to a second tank, we decide to make a concession. The fish inside — Altum angelfish — have only arrived the night before. The lights are off and the fish huddled at one end, unsure of our alien antics around them. We decide to spare them the photographer’s flashes, and my ugly, inquisitive mug to let them settle instead. It is a shame as, at a glance, they are young but already stunning. 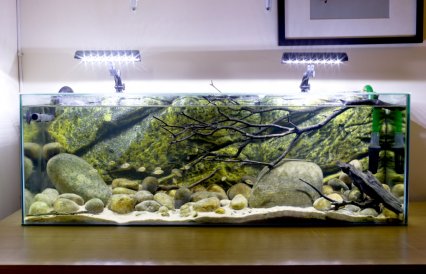 Tom leads us upstairs to his third set-up. In the hallway at a desk sits a comparatively smaller aquarium: a 90 x 30 x 30cm/36 x 12 x 12in Clearseal all-glass tank, from which he has removed the braces around the rim. Now open-topped, the tank bathes under the light of two clamped-on LED units and houses one more-than-happy family of Yellow convicts, Cryptoheros nanoluteus, from Panama; their insouciance at our presence a clear contrast to the previous two aquaria we’ve seen. Inside, bundles of fry at various stages of development pay homage to Tom’s skill at giving the fish a home so cosy that they bred in it. 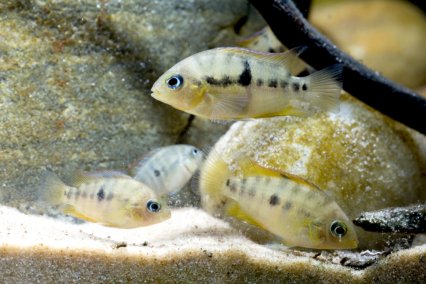 Breeding is something that Tom is unintentionally superb at. He bred standard Convicts quite early on, and though he doesn’t really go out of his way to spawn them, he’s also had historic successes with Ivanacara, some Gymnogeophagus species, Nannacara anomala and both Apistogramma agassizii and macmasteri. If you’re a cichlid, then Tom may well be your Cupid.

Despite the charm of this Central American tank, Tom professes a love for all things further south. He also concedes that he’d like to try African riverine fish, as well as species like Pseudocrenilabrus nicholsi.

Then he throws me. "I’m a catfish fan," he says, making me frown as I consider the cichlid-heavy leanings of everything we’ve seen so far. “I just haven’t found what I want yet. I’m after Tatia musaica 'Ninja'’ cats — I think they’re from Orinoco. I’ve never even seen one in the flesh, but I’m captivated by them."

He’s humble about it, but eventually I tease out of him that he’s won contests for his tanks before, entering the JBL sponsored biotope contest and taking two rankings: second with a Central American set-up and fifth with a discus layout. He’d considered entering the Aquatic Gardeners Association contest too, but managed to miss the cut-off date for submissions.

To go from community start-up to almost romping home with first place in a biotope competition inside of three years, tells me that we’ll be witnessing more of Tom’s tanks cruising the viral vine over years to come. Personally, I can’t wait to see them. And when you see how easy they are to copy, you’ll want to have a stab at your own, too. 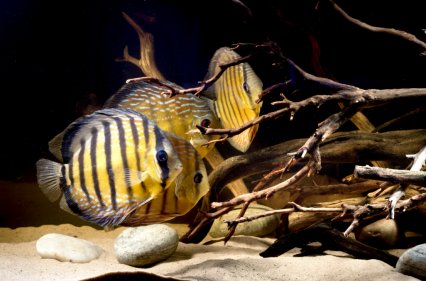 You wouldn’t think it, but Tom’s centrepiece tank was borne out of absolute disaster. The Friday before our visit, there was a different 400 l/88 gal tank sat in that spot, which chose to spring a leak. After a weekend of fluster, and scouring for a second-hand replacement, another tank was sourced, cleaned, installed and assembled. Not only does Tom put together great looking tanks, it seems he keeps a cool head under pressure.

On top, producing a haunting glow, is a USA satellite LED, complete with colour control and storm settings, which Tom found online for £135. With its tight pin-sources of light, it does wonders to create a soft, flickering effect.

Inside, he’s created a finger-tangle of wood using Manzanita branches, combined with a little Redmoor root. The substantial lumps you can see are Sumatra wood, which offer a sturdy hiding place for the fish when they’re feeling shy.

The billowing sand dunes at the base are made up of mere play pit sand, acquired from a garden centre, and the rounded stones, sourced from the aptly named ‘Stoneworld’ are rounded to give a worn, riverine look.

Tom admits to some testing slackness, but knows that the aquarium is currently sat at a TDS (total dissolved solids, or hardness) of between 85 and 90, with a low pH of 5.2.

Contrast that with the chalky, alkaline water at source, and you’ll understand how valuable Tom finds his TMC V2 RO unit. To get the chemistry just right for the demanding discus, he uses one measure of TMC Discus Mineral per 100 l/22 gal of water, and in his canister filters, he runs peat balls from Tyne Valley Aquatics. These leach acids to give his water the slightest 'tea' hue and help to chase the pH down to where the discus like it.

Look about the base closely and there are scattered alder cones. "They stain the water nice and dark," Tom says. "Anything natural I can get my hands on goes in the tanks."

It hasn’t always been that straightforward, though. "I had one bad experience collecting leaves," he explains, "when I thought I was picking up Oak, but it turned out to be something toxic. Some fish died on the back of that, and I felt terrible. It was my own fault, and I felt horrible for it."

Since then, he’s tried buying a few leaves from safer sources, including Guava leaves — noted for their antiseptic and healing properties. At some point, he wants to try some Savu pods, too. 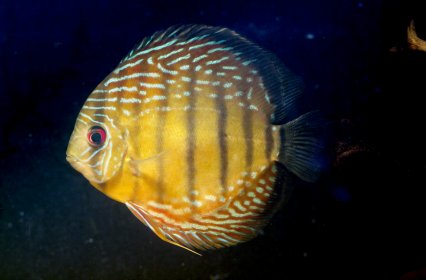 The discus stand out because of their wild origins. They weren’t cheap fish, but then wild types rarely are, and Tom paid out a bargain £90 each for them from Chen’s Discus in Middlesex. The fish came in as Rio Paraconi types, and Tom thinks he has three potential males and a female. All he knows for sure is that when they go through their spawning motions, the harmony of the tank is upset.

Also in there are some Geophagus altifrons 'nhamunda', which Tom sourced from a northern retailer. Though substantial sized fish with potential to grow large (to 25cm/10in), they are peaceful beasts, content to while away their days sifting the sand for nutritious titbits.

Then there are the pacifist Mesonauta festivus cichlids that fill the higher levels of the tank. But like a few fish today, as the flashes go on to the tank, they retreat away and only spend the afternoon teasing us from the corners. Only when we creep up slowly and peer through the sides like fishy voyeurs, do we get to see as much as a glimpse of them. But as soon as the camera comes out, they just go deeper underground and refuse to play. 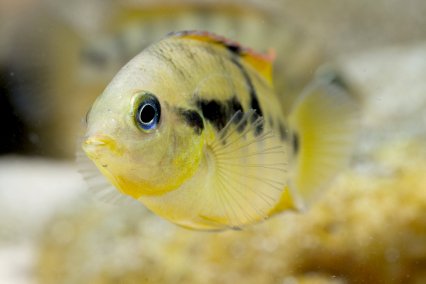 Tom’s 90cm/36in Panama tank is so simple a set up it’s almost sickening. And with a selection of fish that thrive in harder water, he needn’t do anything to tweak his hard, pH 7.6 tap supply.

Once again, Manzanita features as an integral part, taking on a different hue under the cleaner, brighter light of two cheap, unbranded LEDs clipped to the back.

Beyond that, it’s a riverbed of fine sand and cobbles, the latter providing refuge for young, while the former gives the fish plenty to rummage and forage through. A moulded Exo-Terra polystyrene backing (sold for vivariums) provides a convincing enough illusion of a riverbank.

Powering this tank is an All Pond Solutions 1400 canister filter, which Tom admits rattles, leaks and often doesn’t prime, so it spends its life in a washing up bowl. True to Tom’s style, an inline 300W Hydor heater sits out of sight, between lengths of hosing.

The tank is designed to emulate the Rio Guarumo and only has two species inside it: Yellow convicts, Cryptoheros nanoluteus, and Green swordtails, Xiphophorus helleri. Aggression during post-spawn, when a single cichlid went on a murderous rampage and nailed the male swordtails, means that only the two females remain, but they seem happy in themselves and are most likely pregnant from a former coupling. Doubtless, there will be more of them to follow.

This tank, alas, is on borrowed time. Tom already has someone lined up to buy all of the fry, and once they have vacated the premises, he’s looking to do a complete overhaul. What he’ll venture into next he’s unsure of. Honduran red points (think upmarket Convicts) are possible, but so too are standard Convict cichlids, and even Jade eyed sajica cichlids.

That said, even Teleocichla or African shell dwellers are feasible, as Tom drifts through a long potential list of all the other ‘possibles’ that he clearly has in mind for some point in the future. 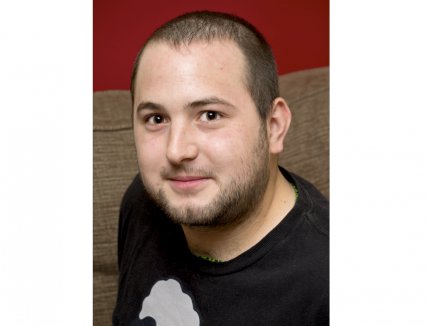