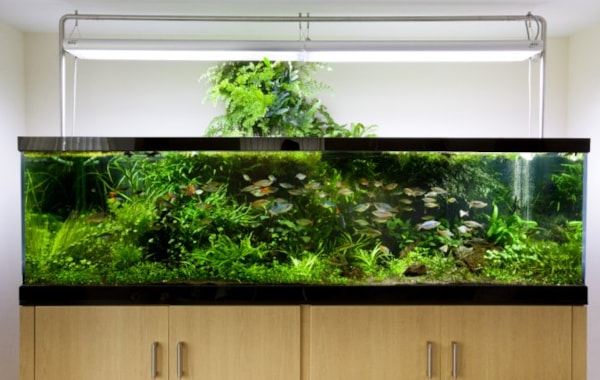 Sanjeev Kumar has created his own crock of gold with a giant home and perfect conditions for his favourite fish. Nathan Hill is invited to see his pride and joy.

You don’t need angry skies and rainfall for a spectacular rainbow. All you need is a passionate hobbyist focussing time and money into a single object of affection.

Sanjeev Kumar is just that hobbyist. In fact, he’s much more. He’s orientated much of his life around this one family of fish.

His is not a world blind to other aspects of fishkeeping either. Prior to chasing rainbows around the world he kept marine aquaria and a glimpse through his hardware still reveals the odd trinket or two from those reef-oriented days.

Two things leap at you. The first is the level of planting, combined with the meticulous manicuring of greenery. The plants are so well composed that not a single leaf sits out of place. 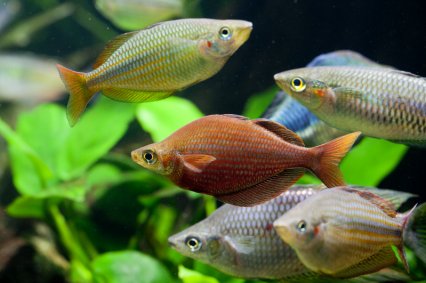 The second factor is the awe-inspiring effect of a tank this size being filled with fish that all barely scrape past 10-12 cm/4-4.8” in length as adults.

Many enthusiasts might fill such a tank with singular, boorish catfish, or huge, domesticated cichlids, but to see it this way is to see something that feels far more natural. This set-up has an element of wilderness about it.

It’s hard to comprehend that the tank has been in its current location for less than twelve months. Admittedly, it had been running for some years beforehand, but needed to be stripped when moving from one home to another. One cannot simply lift it up and carry it, decor and all! 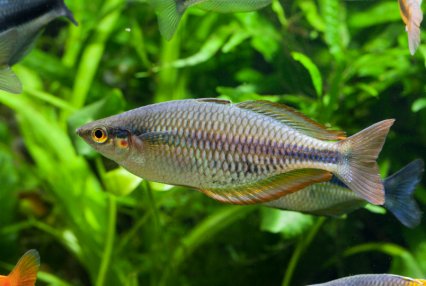 The build was partly inspired by designs at The Green Machine. Sanjeev developed an affinity for their style and wanted his own, and Neptune’s Acrylic Tank Manufacturing provided the hardware to Sanjeev’s pretty exacting specifications.

The stand was the brainchild of Sanjeev’s engineer father who designed it to be separated into two parts, if necessary. With careful application of cladding, the hidden, welded metal frame gives assurance that this structure is going nowhere in a hurry.

Filtration is provided by two huge Eheims, a 2080, and a 2180, both generously filled with Ehfisubstrat biological media. 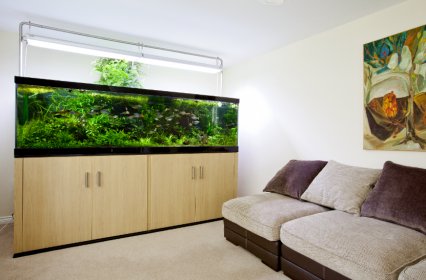 Sanjeev also praises the benefits of plants as filtration and, given the density of greenery, it would be hard to imagine no positive effects from the luxuriant growth.

The 2180 also accounts for much water heating, being rated to 500w. Supplementary heating takes place inline with a 300w Hydor.

Lighting sits high above the tank, because its fiercely luminescent output was too intense when set lower down.

Eight tubes of 54w apiece shine for six hours a day, with an extra half-hour either side only illuminated by half of that complement of lamps.

These ATI PowerModule units give a more than respectable 40 to 60 PAR at the base of the tank — Sanjeev having checked this with his own meter — but, when sat in its former, lower position, 100 PAR or even more was bouncing up from the substrate.

The substrate is a plant-growth promoting mixture of ADA’s Amazonia sand at the rear, while the front is made up of a layer of Tropica planting substrate that’s overlaid with a crust of Unipac’s Limpopo sand.

Decoration is a combination of The Green Machine’s Bluestone, which looks a little lost given the vast expanse of water, and a few large tree stumps acquired from Shirley Aquatics.

Boosting the wealth of greenery, gas comes from two 5kg CO2 fire extinguishers sitting in the cupboard beneath.

Connected to twin Aquamas diffusers that run inline with the return water supply, these belt out a carbon supply for plants. Typically each canister will last around two months. There’s even a UV on the tank.

Sanjeev is quick to assure me that he’s constantly alert to the ever-present threat of mycobacterium strains to which rainbowfish seem susceptible.

For peace of mind, the Vecton UV helps to keep any rogue pathogens in check. 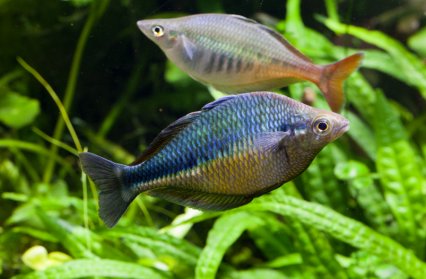 Perhaps as visually grabbing as the fish are the abundant plants. Sanjeev has to reassure visitors that the foliage is in fact real, despite some suppositions to the contrary.

They are both above and below the waterline — including a Red mangrove that nestles on the edge of the huge stumps.

Where these stumps break the surface, plants creep up them to the top and take on a new form. Notably, Hydrocotyle sp. ‘Japan’ has found perfect conditions on the surface, growing in the same way as below the waterline but with a renewed vigour.

These, in turn, are complemented by a selection of floating plants. 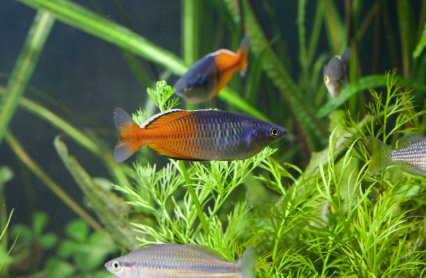 Sanjeev experimented with duckweed, but this proved too alluring for the rainbows which consumed all of it.

The plants are layered for a smooth visual transition across the tank, with no single species punching above a rival.

Some plants have fared poorly, given the rainbowfishes’ tendency to graze on soft growth, so although the project was started with even more species, some have been consumed to extinction.

Others, like the Blyxa japonica, have appeared accidentally, brought in alongside other cargoes, only to anchor and set down roots.

Sanjeev uses the EI method to feed plants, providing phosphates and nitrates in a dry form every other day, alternating with a trace element mix.

Guiltily, he admits to adding the powders directly to the tank but clearly, in both aspects of fish health and plant vitality, this creates no problems. 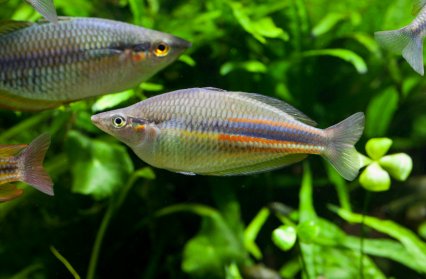 Sanjeev strives for low levels of ammonia and nitrite, and adds nitrate to account for the plants’ relentless appetites.

Water changes are fortnightly, with 40-50% replaced in one go. Water is replaced via a hose, with a mixture of both cold and hot.

Sanjeev notes that although the tapwater emerges quite hard and alkaline, with a pH of around 7.5, it is quickly softened and acidified by the combination of plants, carbon dioxide and substrate, and the tank has a nominal value of 6.8 — sometimes dropping to 6.5.

Sanjeev uses an automated feeder to add small meals during his absence through the day. He offers three small feeds a day, two via the feeder and one on his return, and mixes the food widely. 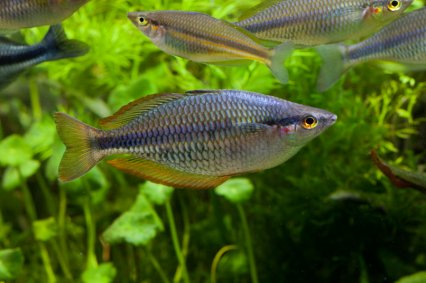 Spirulina flakes are used, as are colour-enhancing foods from TA Aquaculture. Heavy emphasis is also placed on dried insects from Natures Grub. Sanjeev considers it essential to use quality food, citing that he likes to know just how many ingredients used have bio-availability and just how much of its mass is mere bulking agent.

The fish also take it upon themselves to supplement their diet with greenery — and insects foolish enough to seek refuge among the surface plants are soon hunted down. 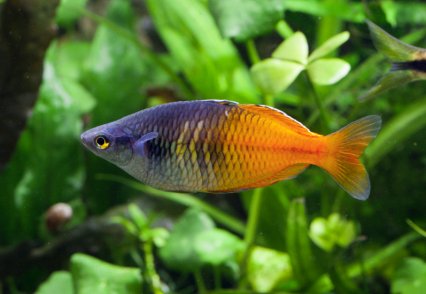 Sanjeev has created a palette of fish colours that cover all shades and nuances of the rainbow itself.

His goal is to house a veritable army of rainbowfish and he has had to travel some distances to get many of the species, citing that the less usual varieties are more readily attainable by approaching cliques of dedicated breeders.

He tells me of rainbowfish 'circuits' — communities dedicated to the family in America, Europe and Australia — but ruefully reflects that the UK lacks such a strong infrastructure.

Subsequently, in tracking down his more valued fish, Sanjeev has journeyed to the Netherlands, Germany and Belgium where he has acquired varieties less common to the UK. 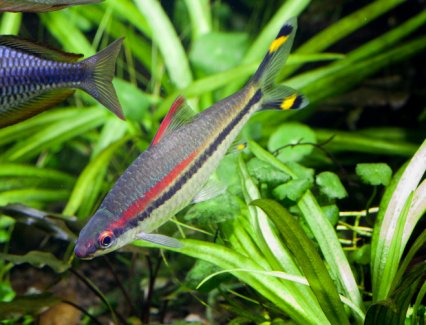 Other characters can be seen dashing between clumps of growth in Sanjeev’s tank. Puntius denisonii appear, but despite these usually being much coveted, these colourful fish look almost bland against the awesome squadron of rainbowfish.

Siamese algae eaters dash out to graze a line of green film from the edges of hanging Bolbitis, a single Epalzeorhynchos bicolor roams, all territorial instincts forgotten in such abundant space, and a flotilla of Yasuhikotakia sidthimunki appear confident, almost brazen, in this vast area. 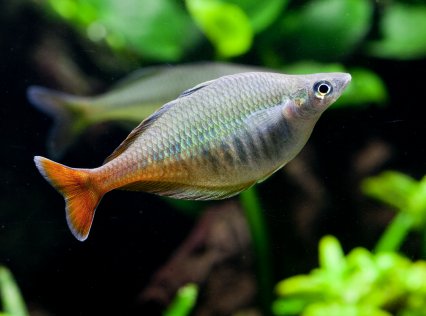 Sanjeev also has numerous breeding assemblies. He is particularly proud and vocal of his insistence in keeping rainbows in groups of six or more, and always having species of which he can readily identify the females!

This is to remove the danger of hybridisation, accepted in some circles but detested by rainbowfish purists — and Sanjeev has a touch of the purist about him…

When required, fish will be rehoused in one of his many breeding set-ups, where Sanjeev proudly displays numerous triumphs: thick clouds of fry and attractive juveniles, and all in pristine condition.

He also maintains comprehensive records of everything he has. He knows the lineage and notes each generation, monitoring where and when any fish are moved.

It’s a system that’s as detailed and comprehensive as any professional breeder trying to raise stock for commercial gain. 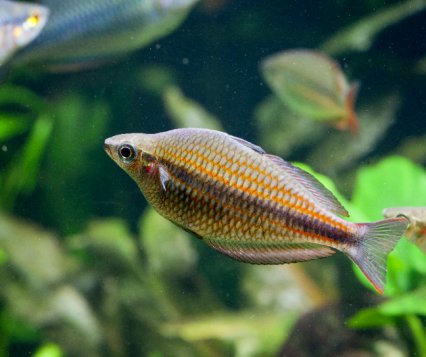 But then, this list is for just one of Sanjeev’s numerous tanks, though that’s a story for another time... 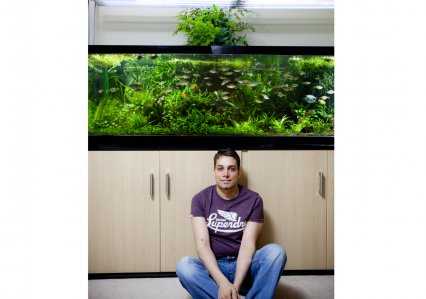 Check out the video of Sanjeev's amazing set-up below: