Your tanks: Ryan Thang To You don’t have to be a lifelong hobbyist to put together a great tank. We meet a relative newcomer who has a passion — and a skill — for putting together gorgeous aquascapes.

Ryan Thang To was a name I’d never heard prior to the UKAPS Aquascaping Experience back in March 2016. On that day, not only did I see his work firsthand, I even got to judge it.
Ryan was one of ten qualifiers to the UKAPS hardscaping challenge being held that day — a competition to see who could create the best ‘dry’ aquascape, without water or plants. Even early on, I lingered a little too long over his design, a manzanita wood and slate concept piece that got better every time I passed by.

Come the results, Ryan scored a gracious fifth place against some fierce and incredible high-end competitors. As I recall, I ranked him higher than that, but the weight of judging diluted my own generous score back down.

Soon after, Ryan and I hooked up on social media. I heaped compliments his way, and sent out feelers for other tanks he might have had in the house. The images that came back showed early promise. There was nothing complete at that time, nothing that warranted a journey down to his home in Milton Keynes, so we went radio silent for a while.

Cue three weeks before writing this. Ryan messages me back out of nowhere with one of the finest small ‘scapes I’ve seen in years, and a couple of calls later I’m set. With George Farmer in tow for his aquascape photography skills, I headed down for a morning of strong Chinese tea, a conservatory/greenhouse filled with Asian vegetables, and a bustling bedroom vying to be a gallery of aquaria rather than a living space. 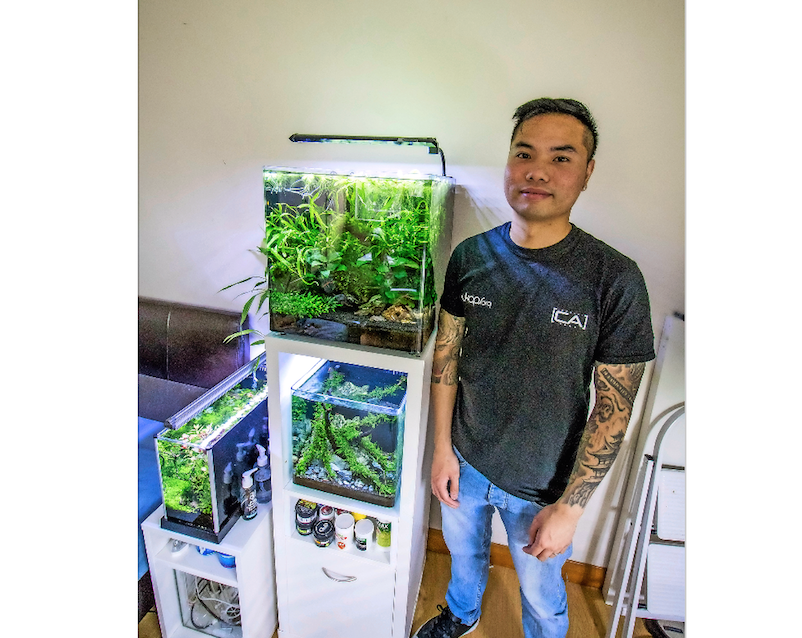 Ryan’s first set-up had yellow gravel and a treasure chest... he's come a long way since then!

Ryan’s tanks are good — very good. But one stands out above all others. Two-feet long, combining the soft green hues of carpeting plants with the shocking blue and red of tetra, his main ‘scape stole the show for the day. We photographed it senseless, George and I both vying for the perfect shot and clambering over each other.

I was so enamoured with it that just hours later my heart was torn apart. In true aquascaper style, Ryan allowed this tank to be king for a day. No sooner than we’d packed away our lenses and departed back to the office, he’d stripped the tank bare, fish rehoused, plants repatriated.

The space left behind now awaits a tank twice as long, maybe twice as optimistic to replace it.
I doubt this will be the last time we visit Ryan Thang To… 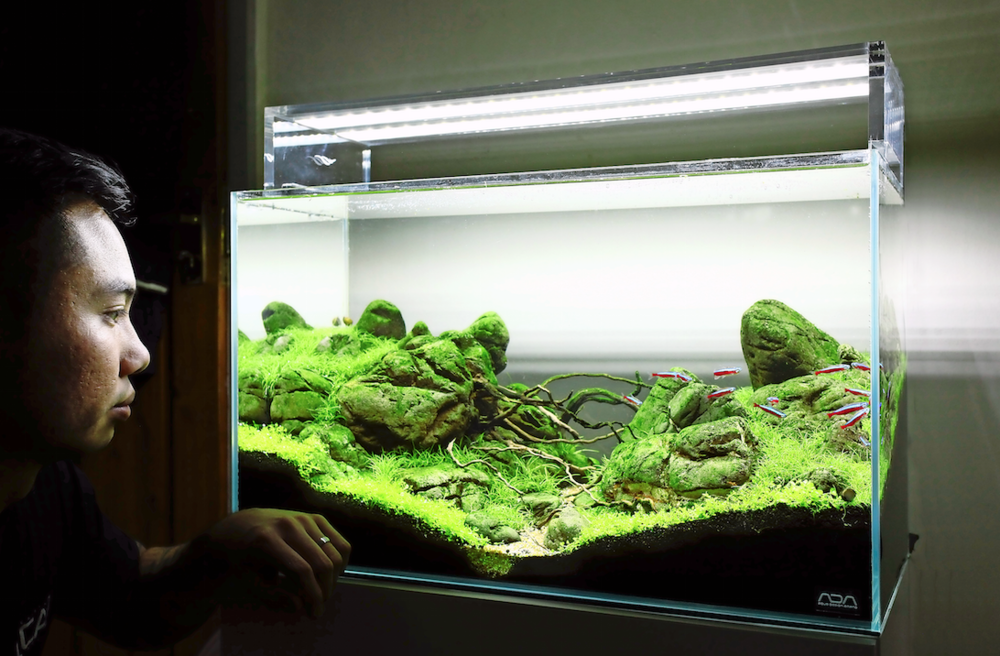 How did you get into fishkeeping?
We had fish tanks when I was a little boy, but I never got involved — I never did any water changes or maintenance chores, my dad did those. Then, three years ago I was browsing Youtube when I found a video about the Fluval Edge aquarium from Hagen, and that alone was all I needed to get me hooked. I didn't start aquascaping until a year after that, when I found the work of Takashi Amano. 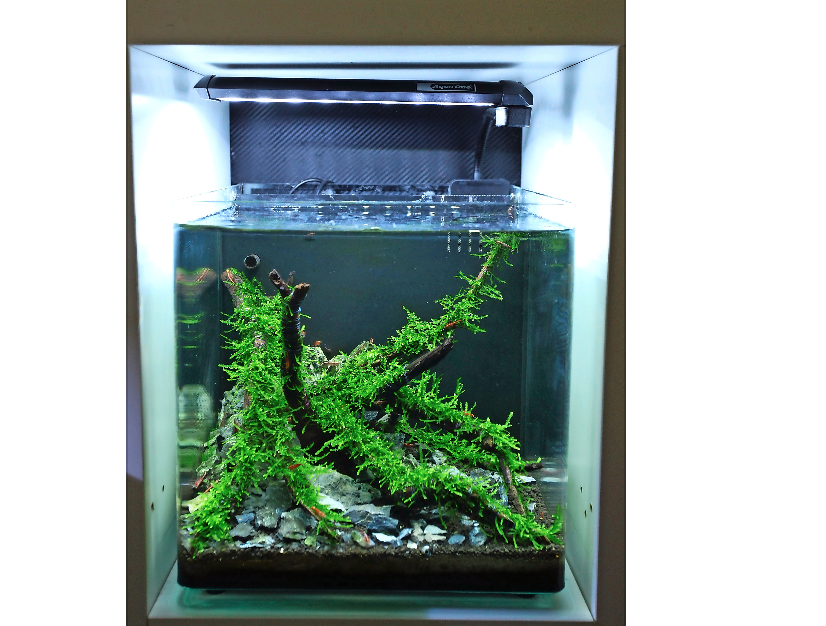 Bright red Cherry shrimp stand out among the moss in this set-up.

What are the most tanks you’ve had running at once?
At one point I had seven tanks up and running at the same time in my room. There were discus, a wide mix of everyday tropical species, and even Malawi cichlids in there. 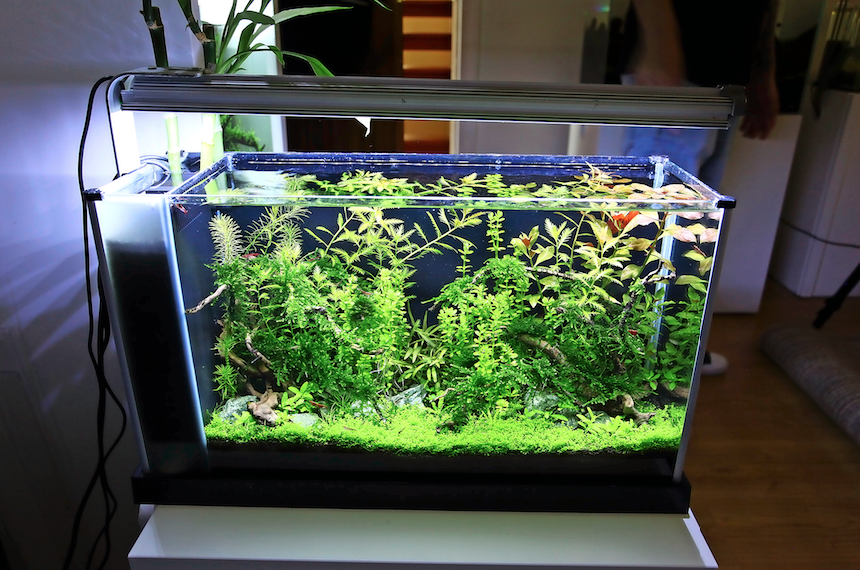 How small was the smallest aquascape you’ve ever put together?
That would have to be my 20 l/4.4 gal tank. It’s not realistic to aquascape that size easily, but it was a fun tank to put together.

What did you have in your first ever tank?
Ha, it was filled with bright yellow gravel, Cabomba and Vallisneria spiralis, and it had a huge treasure chest in the middle. It was quite a classic!

What’s your approach to aquascaping? Do you use high energy or low energy tanks? Or do you do something totally different?
I would recommend going for low tech, low energy tanks to start with. Many people like myself find that when you attempt your first high energy tank with something like a lush Hemianthus callitrichoides carpet, you just drive in to trouble, inviting an algae strike which causes the whole layout to fail. A low energy tank can look just as nice as a high tech one, and requires less maintenance. From there you can work your way up as and when you build up more confidence and gain more experience. Personally, I like to have both low tech and high. Mix things up and experiment, or else you risk becoming bored. 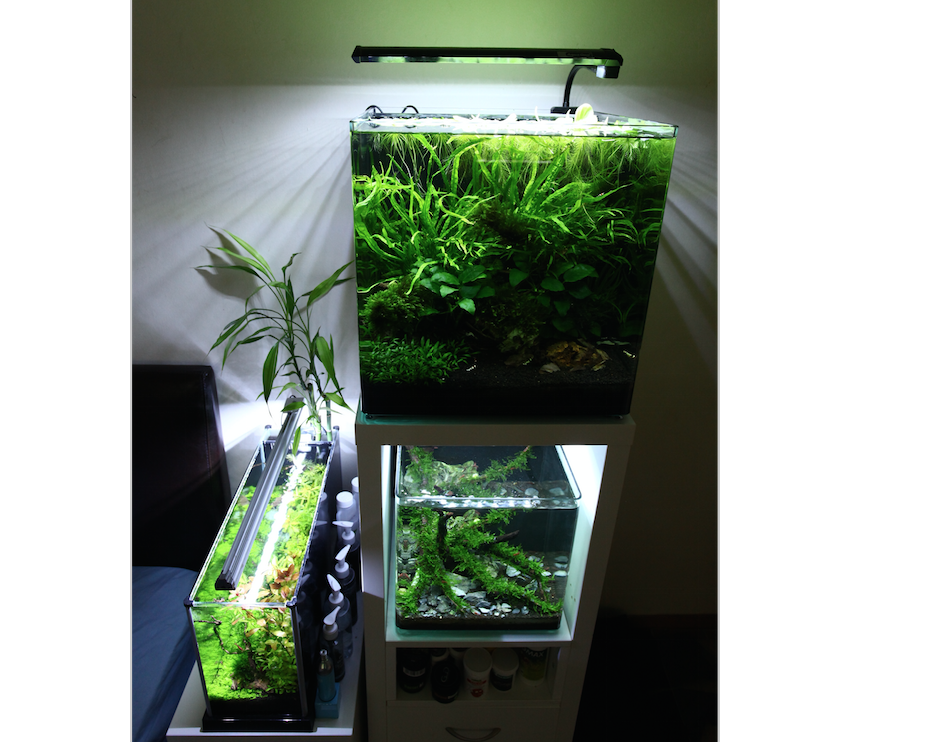 "I’ve only met a few aquascapers, but I’d say that like so many, Takashi Amano would be my main influence," Ryan tells us.

What have been the most successful plants you’ve worked with?
Oh boy, definitely my Hemianthus callitrichoides 'Cuba'. It’s a pain to grow, can fail easily, and is expensive if you mess up with it, but amazing once it’s formed a full carpet.

What fertilisers do you favour?
I use the Tropica range of liquids, as well as the Estimative Index (EI) approach to mixing up my own liquids from powdered fertilisers.

How long does it normally take for a tank to look the way you want it to, after you have set it up?
That depends largely on the layout and what it is for. If I want a tank to grow in quickly I’ll subject it to intense, high lighting, heavy fertilisers and strong CO2. Normally that will get a tank completed from between three to six months.

Who do you consider to be influential aquascapers?
I’ve only met a few aquascapers, but I’d say that like so many, Takashi Amano would be my main influence. His archive of videos, as well as his books, give me ideas and aspirations all the time, and keeps me motivated to always try harder.

The bright colours of the Cardinal tetras contrast beautifully with the predominantly green layout.

What size is the Cardinal tetra tank?
That tank is an ADA 60P, 65 l/14 gal made with low-iron, high-clarity Optiwhite glass.

What have you used in the Cardinal tetra tank for decoration?
I’ve used small twigs of Redmoor root wood to give the illusion of a tree root reaching across, and I’ve built up the rest of the display with ADA aqua soil and rocks I collected from Poland – I have no idea what these rocks are called. There are just the two species of plants in here: Dwarf hairgrass, Eleocharis parvula, and Micranthemum sp. ‘Monte Carlo’. 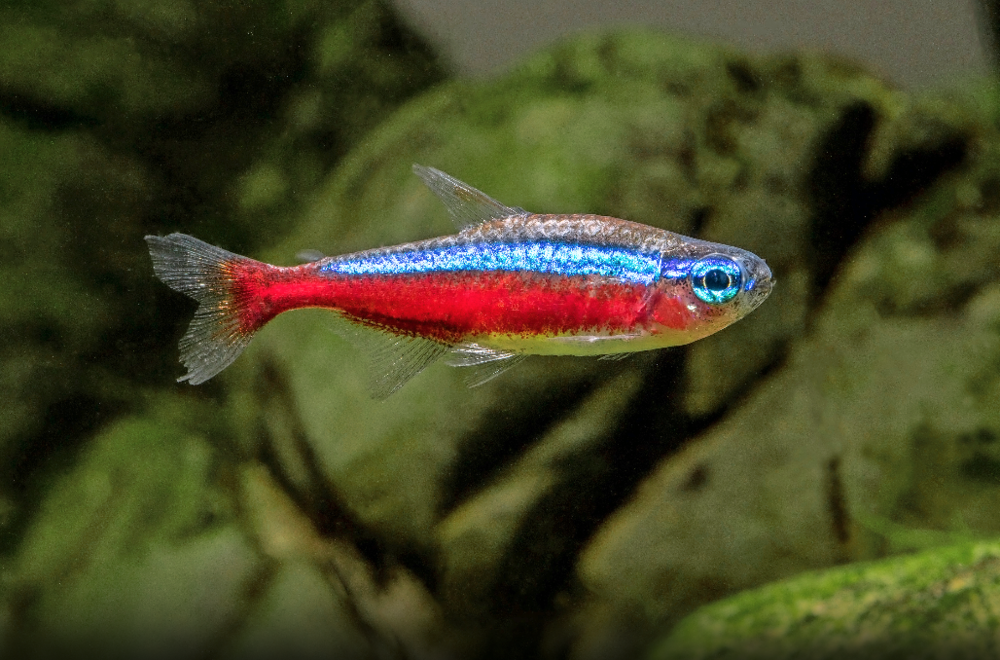 Cardinal tetra — still one of the prettiest fish in the hobby.

What was the inspiration behind the design of that tank?
Over the last two years I’ve always constructed wood-only aquascapes, so this time I thought I’d try something different. The inspiration for me here came from just finding the rocks. As soon as I had them, I had to find out what I could do with them and also discover how cool they could look underwater.

What lighting have you used?
It’s a Chihiro Aquasky LED running up to 72W of power consumption. I keep it running over the tank for seven hours a day.

Do you use carbon dioxide on this tank? I don’t see a diffuser anywhere.
I do, and I diffuse it straight into my canister filter.

Do you have any preference regarding filtration?
I’m a big Eheim fan for my filters.

I notice you use IKEA cabinets for your tanks — what do you do to strengthen them?
I use MDF wooden panes wrapped in vinyl. One full panel goes on to the back (inside the cabinet) and I also add a couple of legs inside to give it all extra support.

How much would you say it costs to put together a good aquascape like yours?
If you have cash, you can easily chalk up a shopping list in excess of £1000. But if you prefer to save some money buy a secondhand tank and stand and concentrate the core of your spending on your plants and hardscape.

What advice would you give to someone thinking of become an aquascaper?
Do your research and don’t be afraid to start experimenting. Try your hand at different layouts and look at other peoples ’scapes to draw inspiration. And never be afraid to try again and again after you fail — success is never guaranteed in aquascaping!