Peter Busani has only kept tanks for three and a half years, but he has one of the densest reef set-ups in the land. Nathan Hill finds out how he got off to such a great start. 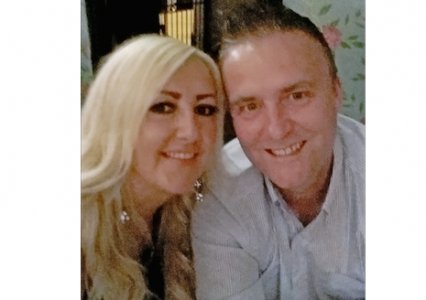 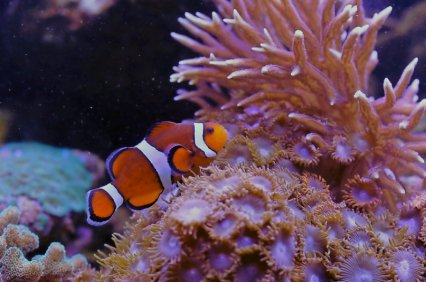 Back in June, a speculative email started a chain of events that culminated with me visiting one of the finest tanks I’ve witnessed this year. "Please see attached images of my tank," it read. "Hope you are interested," it went on.

When I dragged the image down into Photoshop, bleary-eyed and awaiting my morning caffeine to kick in, it was like an invasion from planet chintzy. Colours as brazen as they were varied clawed out of the screen at me, nearly sending my off of the chair in a flurry of palpitations. This tank was, in journalistic parlance, a bit of a goer.

At the first opportunity, I was down at Peter Busani’s pristine Bedfordshire home, admiring the swirling mass of colours first hand, uncensored and unedited. Supping on a daytime beer, and scuttling around his set-up like a ferret in a pipe warehouse, I was duly impressed. Even more so when it transpires that this is Peter’s first ever foray into aquaria. Here’s what we discussed…

Let’s start with the basics — how big is this tank, and exactly how long have you had it running for? 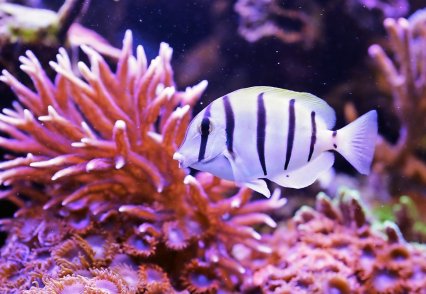 What first attracted you to marine tanks? Did you migrate from freshwater?

This is my first tank. The reason I decided to go full-blown marine was down to my friends who own Deepblue Aquatic in Hemel Hempstead. I used to visit the shop and was fascinated by the fish, but mostly the corals. After several visits I was hooked and became determined to buy an aquarium.

One day, someone returned a system to them because he never had the time for the upkeep. I bought it, which is the tank I have at present and since then I’ve totally fallen in love with and immersed myself in the hobby.

What do you do for a living?

Easy to answer, I now work in the industry with a company called Fintail that distribute the NEWA range of aquatics products — pumps, heaters, aquariums and so on. I was involved in IT for many years but once I became besotted with the hobby I was hell-bent on working in aquatics. So these days I visit all the best shops around the UK promoting our product range — best job ever.

I do stay away from time to time and mostly the system looks after itself. My wife, Margaret, feeds the fish and visually checks things over. If ever there was a problem she would call me. If I go on holiday for two or more weeks I get my friend from my local store to pop in and make sure all is okay and to feed the fish for me. 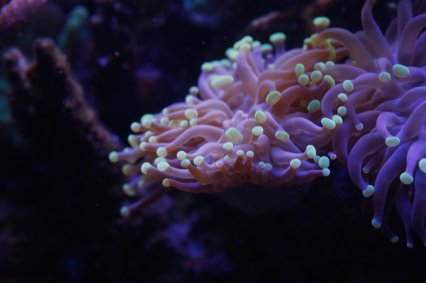 Talk me through your sump, from one end to the other. If I was the water going through, what would I meet along the way?

The water comes down on the right hand side of the aquarium dropping into the sump. The first chamber contains a filter sock and the return from a chiller that keeps things at the correct temperature.

The water then feeds into the second chamber where a lot of waste gets pulled out by a Bubble Magus NAC 6 skimmer. Also in this chamber is a feed through a reactor running Rowaphos for phosphate control.

In the third chamber water is heated by a NEWA Therm 400W heater and is returned into the aquarium via a NEWA Jet 4500 pump. Also in this chamber the calcium reactor returns effluent back into the aquarium, keeping alkalinity at perfect levels.

What’s the one piece of kit you couldn’t be without?

I’d say my protein skimmer but also my calcium reactor. Both these pieces of equipment have helped in making this aquarium I have today. 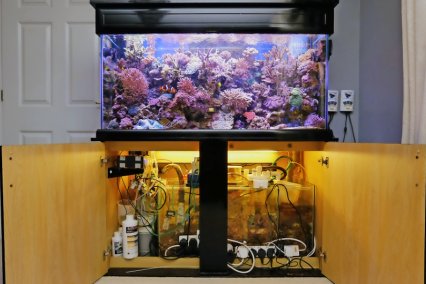 With the cupboard open I can see the inside is wood finish and the outside is black. Is that a customisation thing?

I purchased the tank in a wood finish but we decided that the colour did not blend in with the decor. I contacted a friend who wraps cars and asked if he could wrap the hood and cabinet, and he said he could. We wrapped it in Piano black. The finish and quality really boosted the aesthetics of the tank.

What kind of lighting are you using? Does it all come on in one go, or is it staggered through the day? Why did you go for the lights that you’ve chosen?

I use three T5, 54W bulbs, one Marine Blue T5, one hybrid T5 and finally two Aquaray Fiji blue LEDs. They’re staggered on timers that ramp up and down. The cycle runs over an hour and half in the morning and the evening. Lighting is on for around eight hours per day. I looked into my options before deciding on the T5s but at the time there wasn’t much information on long term LED use. So in the event I stuck with lighting that I knew had been tried and tested for many years.

How much live rock have you used, and is it mixed?

I couldn’t really estimate how much rock has been introduced as it is so well stocked. There is some Java rock, Fiji rock and also a few pieces of Tonga branching, and there are also some plating rocks.

I never really had a reason to go for any particular kinds, I just wanted to build the rock up quite high so I purchased additional pieces once a month until I was happy with the ‘scape. 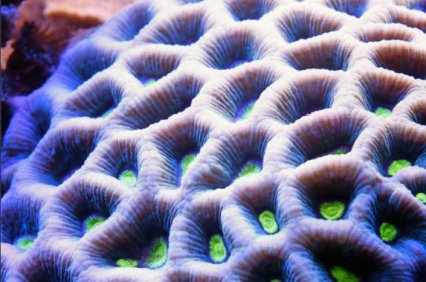 What would you estimate the power consumption up to be?

Very difficult question to answer. Let me just say my electric bill has gone up up dramatically being a reefkeeper.

How much do you think the whole set up has cost you to put together?

The cost of the aquarium to date is probably around the £8,000 mark, but when I spread that over the last three and a half years it’s not too bad. 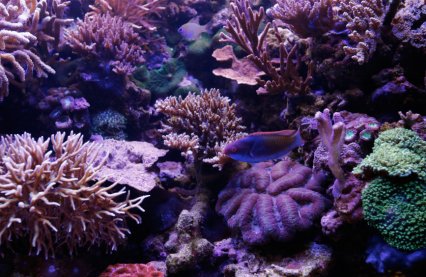 What order did you add your corals in?

I started by adding soft corals and was very successful with growth. Then I started to look into creating an SPS/LPS tank and started looking for the correct information on water quality required to run a successful reef with very fragile corals.

I started by stripping all the soft corals from the aquarium and over the next three months I made sure the water quality was low nutrient for the introduction of small frags. These started responding well, so I decided to add more and have ended up with a fully stocked, prominently SPS aquarium. Stability is the key with any low nutrient system.

Do you need to trim back growth?

I have trimmed back some of the corals that were getting close but they seem to change direction when they become too near to each other now.

My pink Seratiopora hystrix. This was one of my first pieces and I’ve witnessed it growing into an amazing colony. The colour gets better each and every month.

Any other inverts in there?

Have you had any hitchhikers or undesirables turn up?

I had a couple of bristleworms and also a gorilla crab, but I managed to catch them before any damage was done. I’ve been pretty lucky on that front really.

How do you deal with nuisance algae or Aiptasia?

I’ve never really had nuisance algae. I did have a couple of Aiptasia but I always use a Majano wand and it’s been very successful in controlling them. 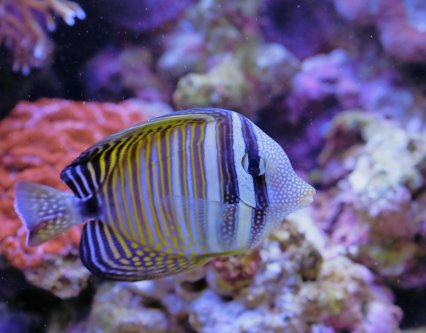 What fish selection have you gone for?

I really love tangs, so I went with as many as I felt I could get away with while keeping the system low nutrient. The other fish came from my LFS after I looked into their reef compatibility.

Have there been any issues between the fish and corals?

I’ve never had any problems between the two, no. The fish were always bought with emphasis on them being reef safe.

Have you had to take anything out because it was troublesome?

Again, no. I’ve had the fish in the system for a long while and corals have never been an issue. The only time I’ve ever taken something out is if I have fragged a piece of coral and then given it away.

What foods are you using for the fish? Do you feed the corals too?

I use New Era marine and aegis flakes. The fish receive it once a day in the morning. Then twice a week they get a mixture of frozen Mysis, lobster eggs and Cyclops. I also put in six bags of sieved copepods once a week. 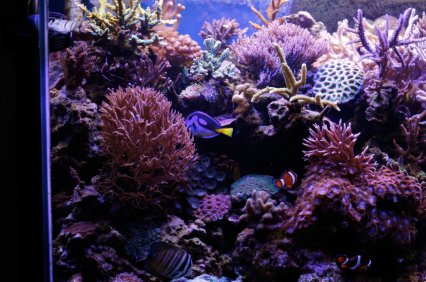 What are your daily, weekly and monthly chores?

Daily I have to check all equipment is working and visually scan over the corals and fish for any problems.

Weekly, I clean the glass with magnet and change 50 l/11 gal of water using water from an RO unit in my garage. I clean inside of the tank with toothbrush and a sponge, clean the combs on my weir and also toothbrush over my powerheads. I clean the skimmer out about two or three times per week.

Monthly I replace the Rowaphos in the reactor and fill up the Kalk in the calcium reactor. I finish off by cleaning the dosing lines and check dosers are in good working order.

If you could go back and start again, what would you change?

I wouldn’t have changed a thing. With the money and time I have put into this tank, everything has always been essentially straightforward and rewarding.

What’s something you wish you’d known when you started?

I wish I’d known the time required at the beginning to get things right. And the amount that it costs to start and maintain a good system.

At the moment I think the new Red Sea Reefer range looks fab.

Any plans for another tank any time?

Not at present. The only time I would consider one is if we moved. 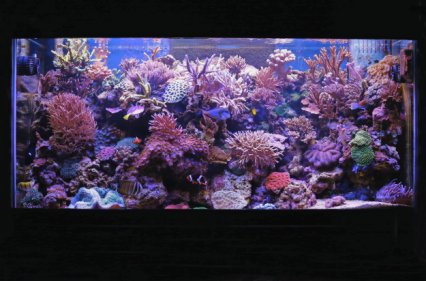 To finish off – and I know it’s a lot to ask, how about a list of the coral you own?

Tri colour Acropora and large colonies of Acropora including aussie acros in various colours and a large colony of white Seriatopora. I think this is most of it but there is just so much in there.