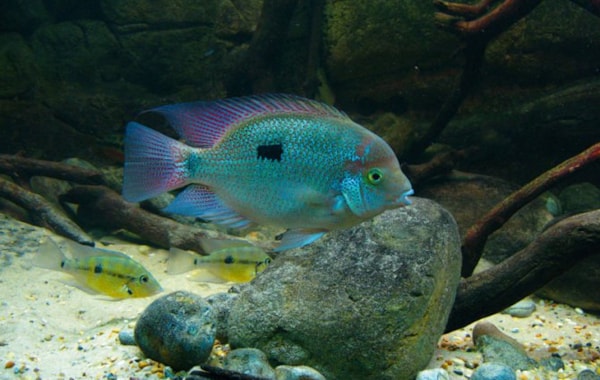 What do you like most about your biotope?
The background has been one of my favourite aspects. I think it blends brilliantly with the Central American theme. This is the first thing people comment on when they see my tank.

I think I have a really nice balance of fish too; the shoaling green Swordtails add an overall authenticity to the river bank feel.

You don’t see Swordtails kept alongside Centrals very often. Are they safe in there? Some of those cichlids are pretty big.
I did a great deal of research on Central American biotopes when I was setting up the tank. Swordtails live in harmony with a lot of cichlids, but some exceptions, like some Nandopsis and Parachromis sp, will almost certainly snack on these fish.

I chose Vieja/Paratheraps sp, which are mainly plant/algae eaters in the wild and aren’t predatory by nature. My other predators are T. pasionis and salvini which will only pick on younger fish. If possible, buy adult fish and introduce them beforehand.

Swordtails make excellent dithers for species such as Thorichthys, Cryptoheros and Archocentrus. These are fairly small fish and can be kept side by side in smaller community tanks. They are also biotope correct.

It looks outstanding. Is there anything you want to change?
Nothing springs to mind. I’m very pleased with the overall display.

What was the hardest part about getting the look right?
As the background is made from two pieces, it was quite difficult to match them together. I had to disguise the join by pressing aquarium peat and sand into the wet silicone joint. Now I’m quite pleased with the overall effect.

Finding the right pieces of bogwood was also very frustrating. The stuff you generally find at your local shop is normally too small and quite expensive. The alternative is to collect some yourself. I wanted branching wood to create a genuine feeling of root structures along a river bank. I chose beech as it’s very safe to use.

What inspired you to set up this style of tank?
I’m a big fan of Dutch-style Central American cichlid aquariums. I love how the Dutch decorate their tanks and display their fish. If you want to create a piece of nature in your front room, there’s no better place to look for ideas than on some of the Dutch cichlid forums. They are truly inspirational. 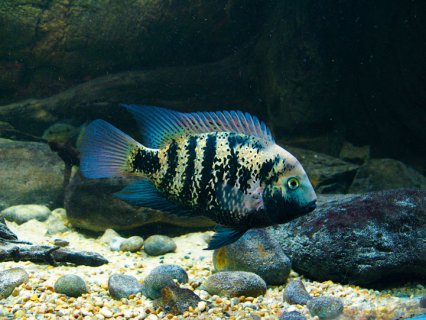 How do the fish get on?
All the fish are living quite happily together. I get gill flaring issues, but never aggressive fighting/chasing. I’ve also tried to arrange the tank so that sub-dominant fish have plenty of escape routes.

All the fish have been introduced as juveniles and I believe this has greatly helped to overcome aggression problems. This has has gradually eased the fish into accepting pecking orders.

Owning a large tank has also helped and I would recommend 1.8m/6’ tank as minimum for any large cichlid community.

Many keepers have problems when introducing mature fish into established communities and everyone will almost certainly experience aggression.

In time my stock list will have to be thinned out, as I have a few potential pairs living together. The other tank should be ready soon and that will enable me to transfer the Vieja argentea/regani and the pearsei pair.

Have the fish bred?
I haven’t had any spawnings yet with my current stock list, but there’s plenty of pre-spawning behaviour. However, some of my fish won’t become sexually mature until two years old.

What have growth rates been like? Considering it’s only been set up a couple of years some of the fish look quite big.
Due to tank size, I believe the fish have grown faster than if they were kept in smaller tanks. Varied diet and plenty of water changes are the key to good growth. The Vieja and Paratheraps species usually max out after around 20/24 months. The smaller fish usually grow to full potential at around 12 months or so.

It’s a 2.4m/7.9’ tank and holds over 1,300 l/286 gal. Do you find maintenance difficult on such a huge one?
Tank maintenance is the same as for a smaller tank, although sometimes you may need some stepladders to reach the back of the tank! Maintenance involves cleaning and syphoning of sand, 25% water changes and checking/cleaning the filter media, if needed.

Due to the messy nature of some larger cichlids, this routine is performed twice a week, but the time and effort is worthwhile.

Fishkeeping CV
Name: Lee Nuttall.
Age: 35.
From: South Staffordshire.
Years of experience: 25.
Occupation: Self employed.
Number of tanks: Two.
Favourite fish: Most fish from the Vieja/Paratheraps complex, but if I had to pick one it would be Vieja argentea.
Pet hate: Flowerhorns. The damage they have done to pure trimacs in the aquarium trade is very depressing.

Factfile
Size: 2.4 x 0.6 x 0.9m/8 x 2 x 3.’
Volume: 1364 l/300 gal.
Details: The tank is all-glass, built on site and seated on a heavy-duty stand made of concrete blocks. It rests on an 18mm/0.7” plywood base with 25mm/1” of polystyrene on top to allow for any unevenness and to prevent the base cracking.
Fish: Vieja argentea, two Vieja heterospila, a pair of Vieja regani, ‘Cichlasoma’ pearsi, ‘Cichlasoma’ salvini, five Thorichthys pasionis and a dozen Xiphophorus hellerii.
Filtration: The background conceals a huge amount of biological filtration powered by two Maxijets rated at 1,700-3,500 lph.
Lighting: Two Arcadia freshwater lamps, plus an extra light for photography.
Substrate: Childrens’ playpit sand mixed with fine grade pea gravel. Large river rocks and paddle stones and beechwood branches.
Background: Custom made by joining a Back to Nature Amazon 150 and Rocky 120 background.