While we were in Singapore visiting the Aquarama show, our friend Benny Ng introduced us to fellow Singaporean fishkeeper Lawrence Siow, who is mad about L-number plecs and who has recently bred L46, the Zebra plec.

Lawrence started keeping fish 30 years ago, and ten years ago, took on a Royal plec. He bought his first Zebra plec five years on, but quickly discovered that they could not compete for food with the rest of his fish, so he set up a species tank.

Today he has 10 adult Zebras and 27 juveniles, which he keeps in a separate tank. He also has the Zebra plec variant L98, also known as the Peruvian zebra or Broken line zebra.

There aren’t many L98s around – Lawrence reckons he might have the only one in Singapore. He’s on the look-out for more, but they aren’t cheap at £250 each. Despite this high price, he won’t sell his baby L46, preferring to raise them and swap them with other hobbyists for new blood. 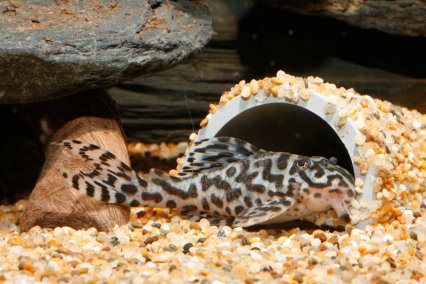 The tanks are decorated with smooth, flat rocks, stacked to make caves and overhangs, and thin, branch-like pieces of bogwood. He has no plants, but the minimalist look of the rocks and wood contrasting with the black-and-white striped Zebras made the tanks look really contemporary.

But what of feeding, I was curious to know.

"I feed newly imported Zebras on bloodworm when they first come in, and then Hikari sinking carnivore pellets," he said. Juveniles get the same pellets and flake, but not bloodworm as he has heard that the young can choke on it.

Watch that temper!
One aspect that not everyone considers with L numbers is aggression. The alpha male Zebra is so aggressive that he can kill younger males. On one occasion, the larger male trapped a smaller male in a cave and started to eat him alive, says Lawrence. He showed me males in the tank that bore scars from other encounters.

They don’t predate the fry, though, and the male is a good parent, protecting the eggs, fanning them and even removing fungused eggs. Lawrence only separates them to prevent interbreeding when they grow up. And each male needs his own cave – Lawrence had to change the décor in one tank as he stacked all the rocks in one corner to hide the filtration pipework, but his alpha male took over the lot.

I noticed a lone Rummynose tetra that had attached itself to a shoal of Black neon tetras. I wondered if it was left over from a previous tank, but Lawrence says that he uses it as his canary. "I use the Rummynose tetra to indicate that water conditions in the tank are all right. If the bright red nose fades or the tetra looks distressed, it is an early warning signal for me and I can act on it before it affects the plecs." He paid £100 each for the ten adults.

Check our Jeremy's other visit in Singapore, to aquascaper Eugene Sng.