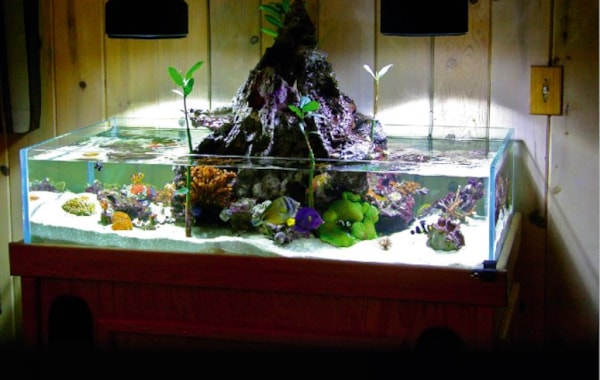 We at PFK are always looking for something differentâ€¦so how about a volcano in your reef tank, complete with waterfalls and amphibious invertebrates? Jeremy Gay speaks to Kyle Verry about his creation.

As soon as Practical Fishkeeping saw this explosively brilliant tank we knew he had to know more, not just for ourselves but for all readers of PFK. So we tracked down its creator, Kyle Verry of Konolua Reef Design for a transatlantic interview.

This is a very unusual marine tank design. Did you take long to plan and build it?
I had done something similar a while back. Since then I had wanted to do it again. So the theory had been planned for quite a while, though design and planning took about two months.

The biggest decision was whether to do a traditional overflow box. Once decided, the tank was custom ordered and filtration and lighting was the next challenge.

I decided on straight sump filtration with no refugium as the mangroves were a part of the design. Lighting turned out to be the hardest part.

Once all the items were to hand it took about a week to build. Water and live sand from Fiji were added immediately after leak tests were completed.

Were there any problems along the way?
Lighting was the biggest issue, due to a lack of product selection. However, there was a funny incident some three weeks in.

The overflow has a 3.8cm/1.5” drain tube with a Durso-style standpipe. Originally it was open and a crab had got inside and climbed down to the sump.

I ended up putting a shrimp tied to a string down the drain line. The crab grabbed it — and I pulled both of them out! 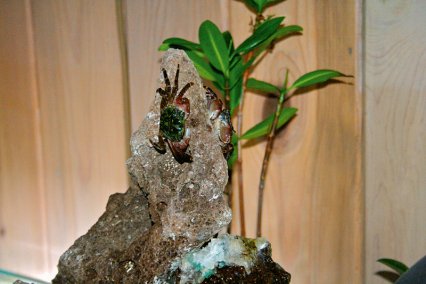 What sort of price would the whole system sell for?
The overall cost is challenging to narrow down as some items were re-used from previous set-ups. The tank and stand ran to $1,300 (£828) and, with appropriate reef hardware for this size of set-up,  the total probably ran to a net $4,500 (£2,865).

Have you had any potential purchasers of similar tanks?
We have two orders and one will most likely be under construction soon, the other one probably May.

I am changing the original design to add a second drain line, though only to accommodate power and a dedicated waterfall line.

One new tank is going to have a freshwater line to top off and feed a small freshwater basin for some freshwater plants.

That will be very interesting and so much larger than the original.

If you did another reef tank for yourself would you change any details?
I have a number of ideas. I will probably not have a 'traditional' reef tank again as this project has increased my interest in the hobby as a whole.

Being the first real attempt at a tank like this, there were surprisingly few obstacles. So, in re-creating this exactly I would not make too many changes.

Maybe I would have said yes if asked if I would change design of the tank a second time around. For instance, any new volcano-style tank will have the volcano itself effectively create a left and right side of a tank, allowing me to add angelfish to one side, though allowing a pass through for smaller fish and inverts.

I am also in the process of designing a ‘moving’ lighting fixture to arc from right to left to simulate the moving sun. This will be a 20k 150w HQI to augment the 10k HQIs already up.

This is particularly challenging, as I want keep it good looking good while not having the means to hide this fixture

What type of rock makes up the structure?
The biggest decision was the choice of rock and whether the waterfall would create unwanted smells or water condition issues. Quite the opposite. It has created a very good oxygenation source and prompted the growth of some interesting algae that I have never seen before.

Due to concerns over potential smell and die-off issues, lace rock had been used exclusively for the volcano mass itself.

Does the system use live rock and, if so, where is it situated?
I only used a bit of live rock to seed the lace rock. I also had a large amount in the sump during the cycle process. I slowly removed it from the sump once life was noticeable on the lace rock.

What species are your crabs?
They are Pachygrapsus crassipes, loosely related to Sally Lightfoot crabs.

Evaporation must be a big problem? How much does it evaporate per week?
Evaporation is a real problem. It definitely affects my tank more than a normal one; the biggest problem being that the waterfall spreads the water thinly and therefore heats/cools it quickly. The heater and chiller tend not to come on that much.

I can end up adding two (US) gallons per week or ten, depending on the weather. One week it was about 95°F (35°C) outside and I was constantly adding five gallons every two days!

However, during a normal week in my air-conditioned house the tank will require a little less than a gallon a day. 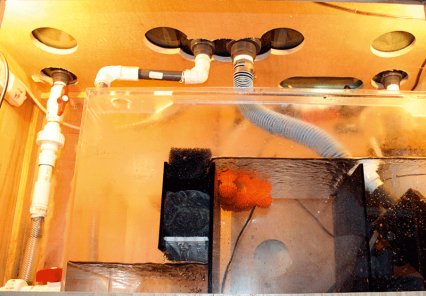 Where does the water exit the main tank and fall into the sump?
The volcano itself is situated around a glass overflow box built into the centre of the tank. That has a 3.8cm/1.5” drain line down to the sump. This is similar to a standard reef-ready tank, though simply with four glass walls.

I have it slightly off-centred from front to back to allow for more of a viewing area in the front. I also have a closed loop for the chiller and the water change line that exits outside the house. That line is plumbed underneath and placed in the back left and right. 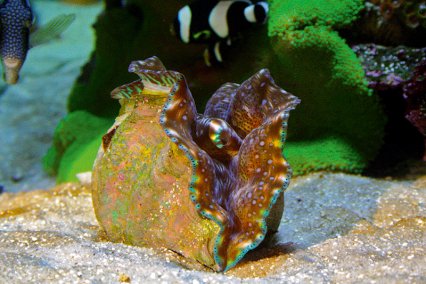 This is a very off-the-wall design. Have you done anything else as unusual before?
I had done one a long while back that was similar in theory but not execution. I have always been fascinated with crabs, and then had a 2 x 2 x 1’/61 x 61 x 30cm tank with a small escape area in the middle.

I liked the thought, but by not building a tank specifically for the purpose I ran into problems that created water quality issues. The waterfall is an absolute must feasture for a tank of this style to function properly.

I have also done ‘secondary’ tanks that housed a beach-style mangrove tank attached to a main tank, like a separate refugium or sump. One had a sand bed ramp and housed Fiddler crabs that burrowed under the sand. This also had a simulated tide.

Could you tell us something of your company?
Konolua Reef Design came about as a result of wanting to help people unable to afford fully customised tanks but still need the advice of aquarists who have the vision to be able to lift the look of tanks from the ‘normal.’

A typical reef tank is a marvel and a joy, though one that’s unique, built with maintenance in mind and relatively affordable wins over both owner and viewer.

A staple utility in my tanks is a facilitated water change system that allows for routine changes to be completed in under ten minutes — but cleaning algae is a different matter.
When the weekly grind of tank maintenance can be reduced by 80%, everyone benefits!

My customers tend to stay with me during their early days in the hobby and then move on to make their own decisions. My services include design, set-up and execution of a tank idea, and then six months’ of training. Customers are then on their own. 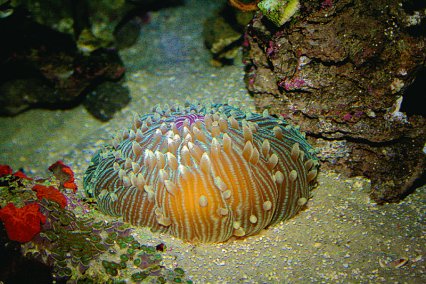 The design came about to house coastal-type crabs that spend half their time outside the water and the lagoon-style tank is plumbed with a three-way waterfall off the main return for a 'wet' climate.