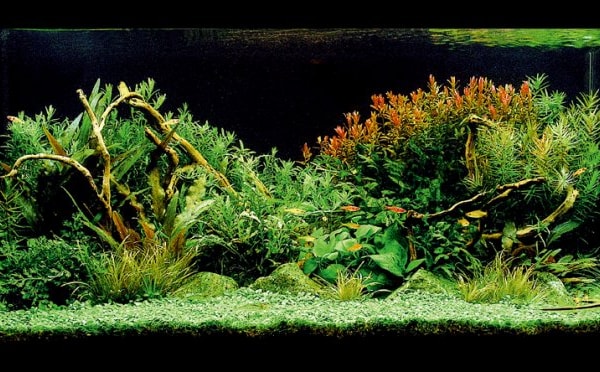 George Farmer interviews Kristoffer Jørgensen, a Danish aquascaper and planted tank enthusiast who learned a lot from his first project.

This is aquscape is Kristoffer Jørgensen's initial attempt at creating a planted tank.

He uses other well-known aquascapes as inspiration and combined several styles to create this great layout that holds just 54 l/12 gal. It is an excellent example of how plant and fish choice can create an effective sense of scale, resulting in the aquascaping appearing deceptively large.

The combination of wood and rocks and plant choice with their varied textures and colours result in a beautiful display remarkable for a first effort. I hope this inspires newcomers to the planted tank hobby, showing them what results are capable with a little research and appropriate equipment.

Kristoffer faced several challenges when embarking on his debut aquascape. Here, in an interview with George Farmer, he explains how he overcame them...

How did you create your aquascape?

Since this was my first real attemptI looked at countless numbers of pictures for inspiration. My tank was particularly influenced by three specific aquascapes. The first was Mike Senske’s 'Dutch East Passage', the second, Luis Navarro's '75 gallon Open Foreground' and finally, Justin Law’s 'Summer Dance' Allhad my full attention at the time I was planning my own. 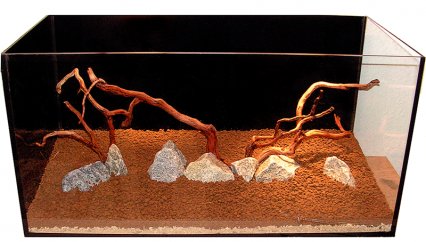 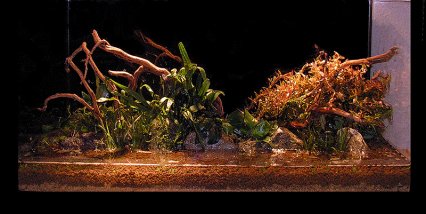 Above: Kristoffer's hardscape (top) and planting into wet substrate.

I printed out full-size photographs of all three and placed them on my desk where I could look at them and get some ideas. Specifically I liked the line of stones used in both Senske’s and Navarro’s layouts and the way the mid-ground plants almost fell out from behind the stones. I knew I would do something like that too.

From Law’s layout I liked the nicely trimmed Rotala stems and the way he used the ferns as a focal point. I also liked the way Mike Senske mixed various colours and textures, as done in the Dutch style. Yet I wanted something more easy on the eye and with less variation.

Did you experience any problems and what did you learn from them?

This tank was a challenge all the way, but was also a great learning curve. I have learned so much and it has given me more experience than I could have ever hoped for.

First I had problems with the plant roots because they got loose from the substrate, so I had to fix the roots through small pieces of acrylic sheet. The tank then became infested with all sorts of algae — thread/hair algae appearing first, but algae-eating shrimp solved that. Then it suffered from green dust algae that persisted for a while until the Otocinclus helped.

Green spot algae became a problem that lasted until the aquarium was stripped down.

But algae issues were not my biggest problem. I received various Bolbitis species from Tropica to test. They had apparently suffered damage during transport and slowly perished. This was the main reason the aquascape didn’t last long-term.

I also tried hard to find the right trimming technique to ensure the plants matured simultaneously so they looked their best at any one time. This was a tremendously difficult task and I never succeeded fully on this aquascape.

I also needed to learn how to control the Glossostigma since it grew faster than all the other plants. I never tried to trim it — and that was my worst mistake. It grew so thick that the plants underneath died and the decaying plant matter created issues for the whole tank.

Even though the aquarium was a disaster, as a complete and perfect aquascape, I learned a lot about plant choice and growth, how some are not suited next to others and how to trim them to ensure they stay healthy. That’s something I’m still learning.

However, the most important thing I learned so far is that failures are important. Don’t be afraid to try something different or complicated as every time you fail you can learn to get it right next time.

Future plans: After my current job ends my family and I can hopefully afford to move to a bigger house and have room for more tanks. I hope to build a huge tank with plants growing out and into the living room.

Why aquascaping? Ever since I had problems I tried to learn everything about keeping plants healthy and try to get a tank to look its best.That’s why I like aquascaping so much. It’s a great way to use those techniques every time you set up an aquarium, no matter what you plan on doing. I love helping people decorate their tanks and spend a lot of time on different forums to do that.

Favourite aquascaper: Steven Chong for his effort to inspire all of us to become better artists. I love his Aquascaping Philosophy 101 and 102 articles as they have inspired me a great deal.