We catch up with former PFK aquascaping star Kris Oddy to see his current, hard-to-tame explosion of greenery.

Kris Oddy blew us away when he first appeared on our PFK radar. A leftfield aquascaping unknown in what was usually a tight knit community, he had put together an amazing layout both below water and above it, using orchids and mosses to keep the ’scape going up above his protruding decor.

At the time, he alluded to another project in the pipeline, and now it’s here and it’s even better than his first stab!

We let Kris take up the reins on his new project… 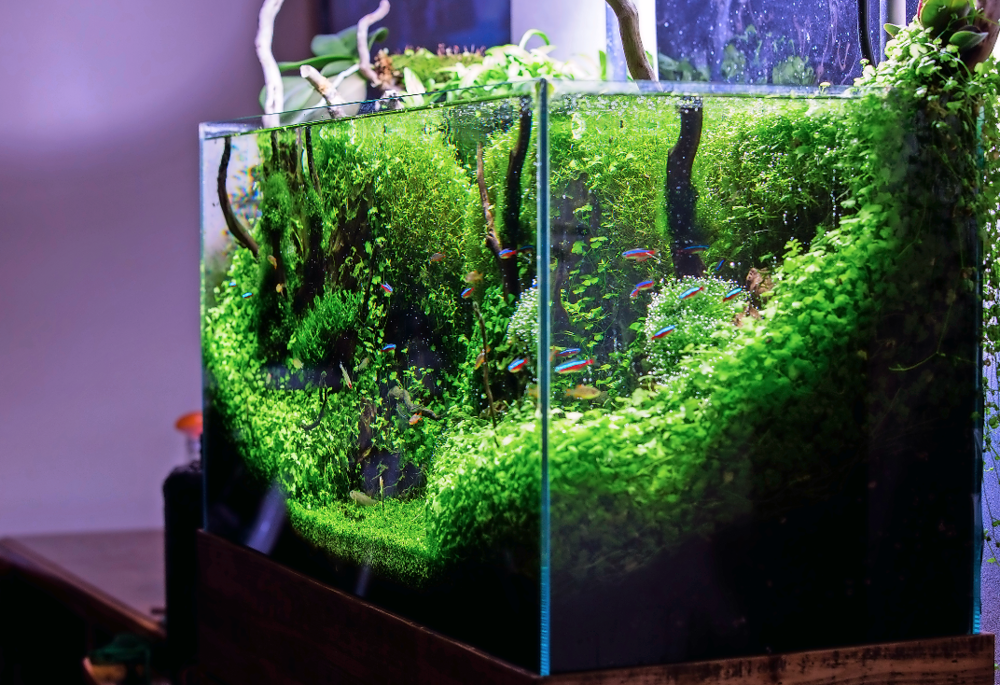 This is a very different layout to your last tank. What was your inspiration behind this one? How would you describe it?

I wanted to create something using the dimension of the tank’s depth, which was tricky in a tank of this size. Originally, I’d planned on using sand to create a ‘disappearing point’ involving a pathway that separated the two sides of the aquarium. In the end, for this particular layout I decided that a carpeting plant like Micranthemum would produce a softer, less dramatic and more delicate feel.

The layout was assembled by placing the hardscape and plants in layers from front to back in such a way as to produce a sense of perspective and depth. Banking up the substrate played a key role in creating the gradual heightening effect. I think it produces a grander sense of scale, even though the aquarium is in reality not that big. 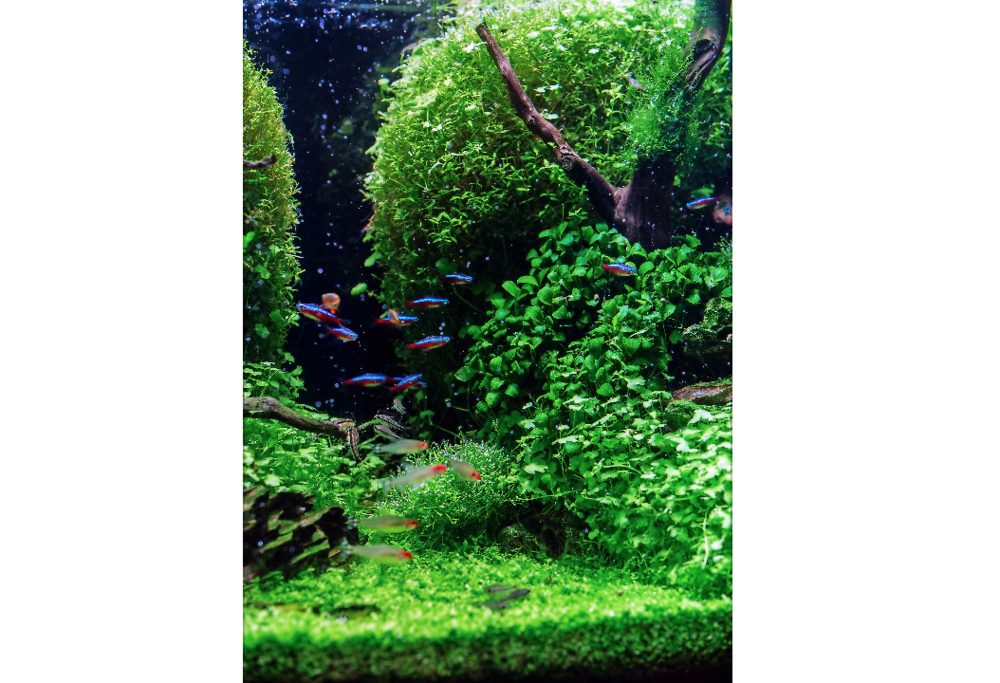 How long has it taken for the tank to grow in? Did you add all the plants at the same time, or were some added later? Which plant species have you used?

It’s all grown in fairly quickly. The photos here were taken after just six months. I started the aquarium with substrate and hardscape – the rocks and wood – for the first couple of weeks before even planting.

I’d planned my plant species from the beginning and knew exactly where they would all go. This isn’t always the case for me, and adding or removing plants is something I consider pretty normal throughout the development of a nature aquarium.

How do you keep the Riccia down? Isn’t it usually a floating plant?

Riccia is usually a floating plant but it’s easy enough to anchor down just by tying it to stone. It grows extremely well when fully submerged and given the right conditions it pearls — produces loads of bubbles through photosynthesis — like crazy, which is awesome to look at. 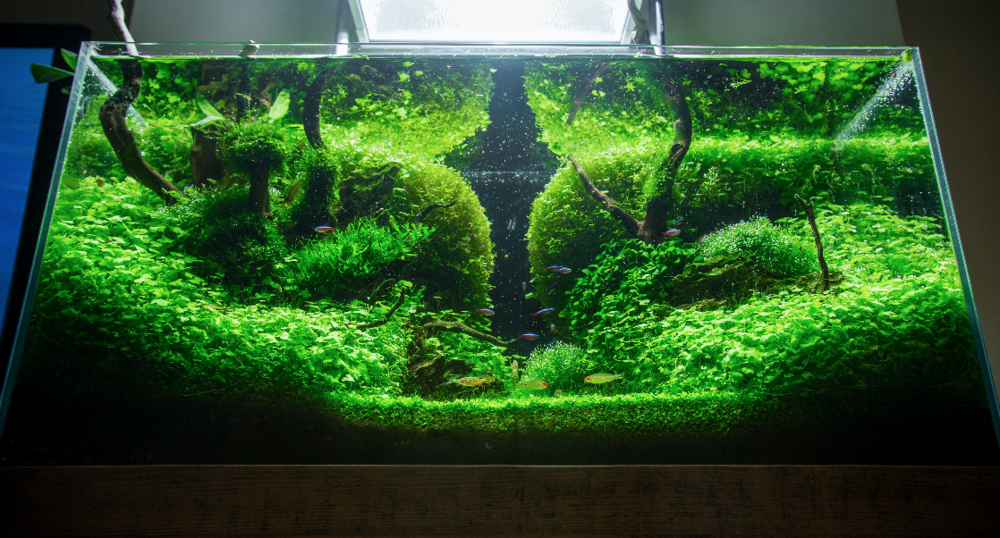 What have you done differently to grow the plants in this tank, compared to your last one?

The only things that are different this time are the lights and the method of fertilising. Last time, I was using ADA fertilisers, specifically Green Brighty Step 1 and 2, as well as Brighty K.

This time I’ve adopted the estimative index (EI) method. Co2art.co.uk have formulated their own two-bottle version — one using macronutrients and the other micronutrients. I don’t do anything fancy, I just use as directed and I get great results. I’m not ashamed to say that my reason for deciding to use it is simply because Co2art have given me an unlimited supply to try out for as long as I want. 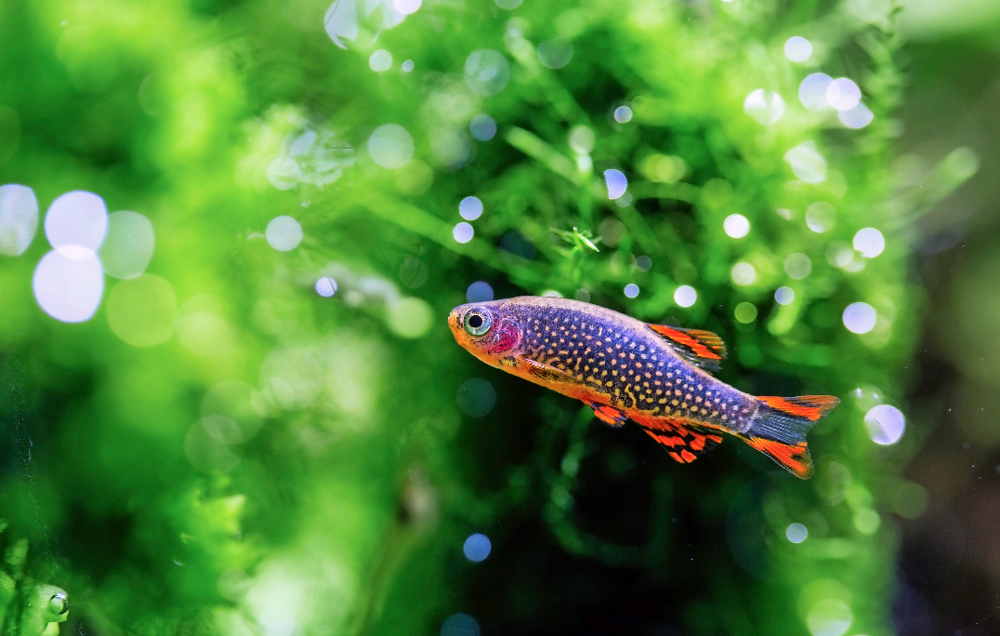 How much time does it take to maintain the tank? Which chores do you do daily, and which weekly?

This set-up is pretty high maintenance; keeping it at its best takes a lot of effort. I trim and push down the Hydrocotyle every couple of days. Left to its own devices with this much light and CO2, it’ll just take over the aquascape.

I perform a weekly 50% water change, directly after cleaning all the glass and trimming the Pearl weed. At the same time, I run my hand through the mini Pellia to lift out any detritus and give it a little movement — this is important because I’m not running any supplementary flow pumps for circulation, and debris can build up fast. Riccardia chamedryfolia is delicate so I try not to touch it – occasionally I’ll have to reattach it to the wood or rock with a little superglue, and I’ll take the opportunity to trim it. Some of my plants, like the Pellia liverworts, are slow growing and prone to algae so a good clean-up crew is essential. I use Amano shrimp, Otocinclus dwarf suckermouths, and a Flying fox. I’m not doing it myself, but I’d suggest additional flow pumps or powerheads if keeping Pellia.

What substrate are you using?

As in my last tank, I’ve used the full ADA system including all additives, power sand, and Amazonia Aqua Soil.

How much light do the plants get a day, and what light is being used?

The tank gets an eight-hour daily photoperiod. Maxigro supplied me with their Maxibright daylight 315W ballast along with a Philips 315W ceramic metal halide lamp, which is a beast of a set up — it’s actually a horticultural light for hydroponic growth

What type of wood have you used?

I’ve used a driftwood from a local store, Southern Aquatics. Before buying, I like to spend as much time as possible playing with wood and rocks, to decide which will work best for my particular project. It’s vital that a ’scaper takes time when deciding on hardscape for a layout and not just rush into anything. 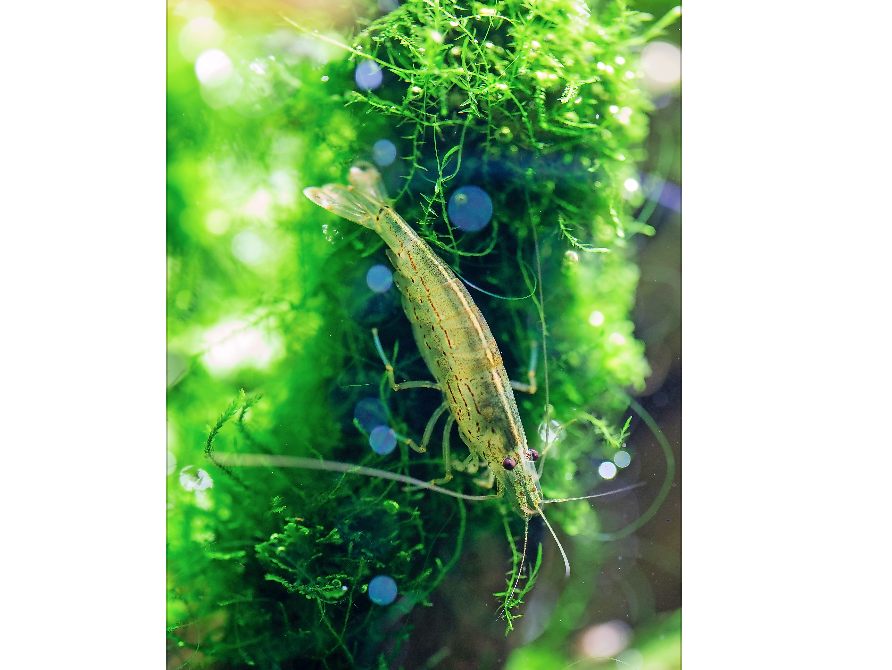 What size is the tank? What glass is it made of? Is it branded or a custom made model?

It’s the same tank I used for my last layout – a 112 l custom-made 80 x 35 x 40cm Optiwhite glass design. The cabinet was custom built by my brother out of pallet wood.

Which CO2 set up do you have, and how much are you dosing? Do you use a bubble counter and drop checker?

I’m using a fire extinguisher with a dual-stage regulator and 12V dc-safe, low-power, cool-touch solenoid magnetic valve from CO2art, feeding through a bubble counter. I do use a drop checker to assess CO2 levels.

What filtration are you using?

Nothing exciting, just a bog standard external canister filter from CO2art, with the standard media it turned up with. I kickstarted it by using some biomedia from my old set-up.

Is the heater internal or external?

Do you use RO water? 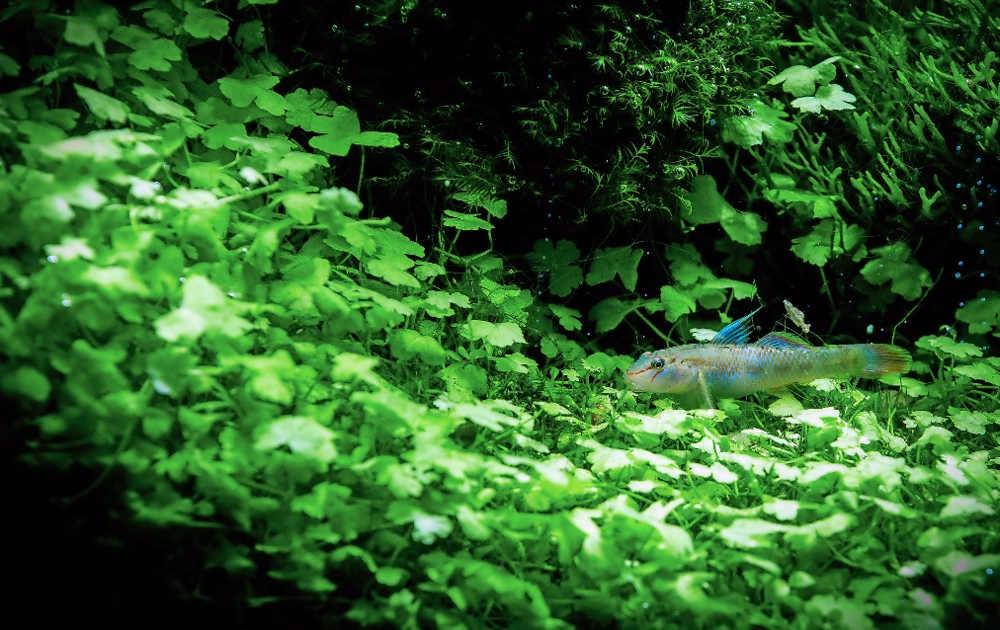 Which fish have you opted for?

I personally think a tank looks best with one schooling species — Cardinal tetra, for example. But this time I decided to do something different and went for Cardinal tetra, Rummynose tetra, Celestial pearl danio, Pygmy corys, Amano, Cherry, Rock, and Rilli shrimp, Otocinclus, Flying fox — and a freshwater goby that just sort of ended up in there. Not sure what type it is but he seems happy enough in the tank.

What is the most difficult part about running this tank?

Controlling the Hydrocotyle. It really is rampant.

How do you control algae? Do you use chemicals, fish, or clear it manually?

A mix of everything. If I really need to, I’ll use some hydrogen peroxide 3% in a spray bottle — it kills off algae and is harmless to the plants. For the most part a good clean-up crew consisting of Otocinclus and Amano shrimp will do the job. I added a Flying fox recently after noticing a little hair algae — if you keep the feeding down a fox will happily eat hair algae. During water changes, manual removal of algae is also performed.

What would you guess the combined cost of this set-up to be? 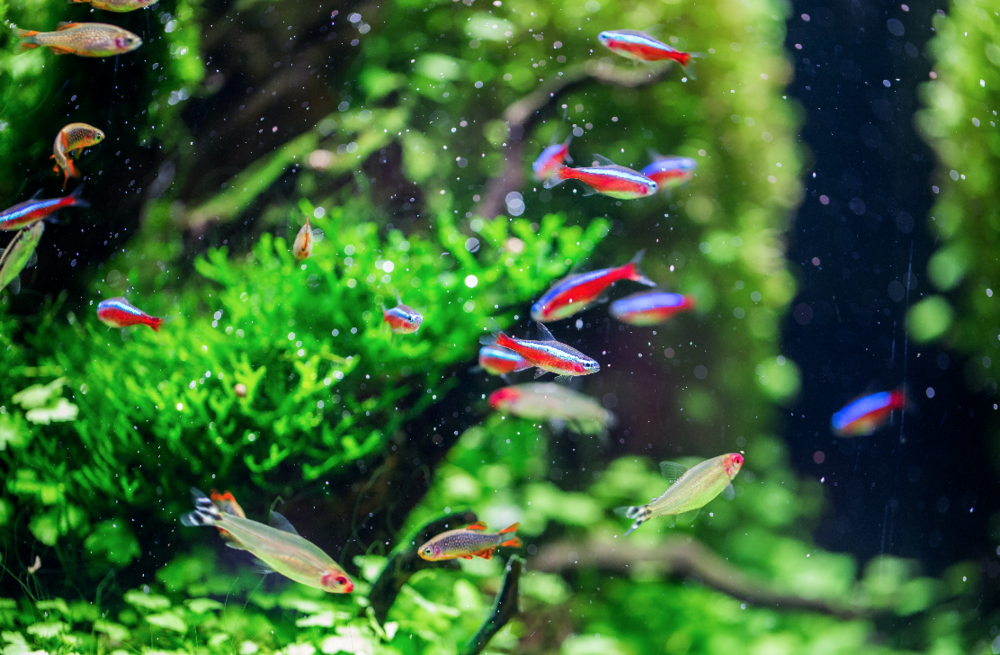 What would you advise someone looking to put together a tank like this for the first time?

I wouldn’t advise it unless you’ve already got some experience in aquascaping. Always think about how much time you have for maintenance chores. This set-up needs daily attention and can get difficult to control if I slack off.

If you do want to do a similar set up, I advise against Hydrocotyle unless you have no life and can spend countless hours maintaining it. I’d also strongly advise having additional flow pumps when using liverworts and Riccardia.

Where do you source your plants?

CO2art supplied all the plants I needed.

Tell us one new thing you learnt when putting this set-up together.

That Hydrocotyle sp. ‘Japan’ looks amazing but is a force to be reckoned with!