John Ciotti surprised the US marine keeping fraternity with his 'upside down' reef tank. He's never been afraid to try something radical and here tells Jeremy Gay how his creation came about.

A photographer of elite aquatic systems, John Ciotti sees at first hand what excites the aquascaping world. He’d set up before, but this latest project took the hobby to a whole new level.

We’ve tracked John down for an exclusive interview:

What are the dimensions of your tank?

What equipment is fitted to it?

One of the great things about this particular aquarium is the lack of equipment. Being an all-in-one-type it only contains a small and simple protein skimmer that seems to perform well enough, as well as a small 10w return pump to get water from the sump chamber back to the display.

A single MP10 Vortech creating a nice wave motion is also attached to the side pane of glass. 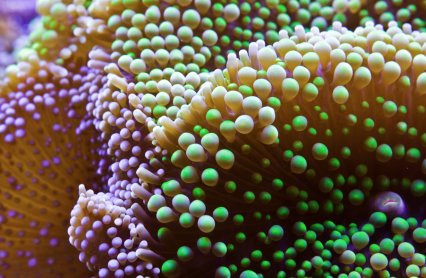 How long has it been set up?

This layout has been up and running for about 24 months now. It has even gone from my home into the care of others, as I was moving from San Diego to Los Angeles. I wasn't comfortable with the prospect of moving the system, so it stayed in place instead of leaving with me.

What was your inspiration for the set-up and have any previous aquascapes been leading up to this design?

The concept came to me more on an impulse than anything else. I hadn’t any sort of clue or divine indication that this was going to end up this way.

Obviously the thought of creating an aquascape out of the norm was intended, but to how far out I didn’t know until it was finished.

I suppose my mum telling me I needed more overhangs in every aquarium I 'scaped as a child could have had some sort of significant impact on this particular layout, Repressed feelings maybe? 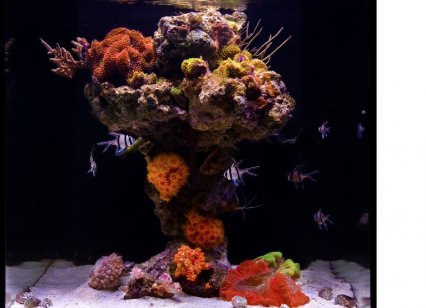 How is the rock structure fixed together?

The 'scape was constructed with the use of a single piece of 1.6cm/0.75″ PVC cut to length and slid through four pieces of carefully drilled live rock.

A base was created by drilling a hole halfway into the bottom chosen rock and a cap by repeating the process for the top. Once everything was together a reef safe epoxy was used to keep everything neat and tidy.

Your sun corals look healthy and as if in a natural setting under that overhang. What tips do you have for growing them and how did you fix them?

I switched from exclusively feeding Cyclop-eeze to a combination of Reed Mariculture products, Phyto-Feast, Tiger-pods, Oyster-Feast, for example. A by-product of this switch has been a pleasant and noticeable increase in how long my non-photosynthetic corals stay out.

Although I've not noticed any significant growth increase just yet, other microfauna and tubeworms seem to be taking advantage of the varied diet. 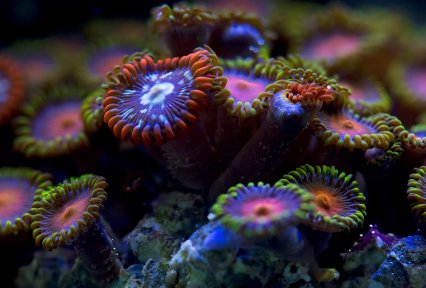 What fish/corals/inverts are in there?

There’s a few different color morphs of Ricordea florida and Zoanthus, Tubastrea, Dendrophillia, Dendronepthya, Stereonepthya, photosynthetic gorgonians and Trachyphyllia geoffroyi. I’m sure there are others I’m forgetting though.

In there too are two captive-raised Pterapogon kauderni and a single captive-raised Elacatinus figaro (Yellow-line goby). At one point I actually tried out some clownfish, but they were aggressively hosting the corals so I had to remove them.

How do you light the bottom without it casting obvious shadows?

There’s a bit of a shadow, but the amount of LED over the aquarium helps give it a softer look, much like a soft box would with photography. I think that the light bouncing back/reflecting from glass also helps.

Did you encounter any problems with this tank set-up?

Getting the flow to work correctly was initially a challenge. Having so much open space allowed a lot less water movement to go a very long way. It was troublesome keeping the sand down and keeping the corals happy up top. 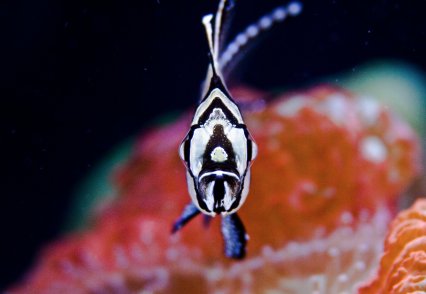 Is there anything you would change?

You’ve recently taken part in a marine hardscape aquascaping competition. Can you tell us about that?

Aquascaping competitions seem a bit funny. I really like the idea of the hobby becoming more forward thinking and progressing as an art form but, as far as I am concerned, judging aquarium layouts is a bit subjective and can be difficult to do so fairly.

I've entered a few live aquascaping contests and, by the luck of the draw, won them all.

This last marine competition wasn't so easy. I was up against a very talented Scott Fellman who tried to create a unique and elaborate approach to a dry reef ‘scape, taking his time to perfectly place each piece of rock over a few hours.

I, on the other hand, simply created an aquarium using ‘nature aquarium’ rules to fresh water plant layout but geared towards marine animals and taking just about half an hour.

The judges ruled in my favour. I don't think they did so because my aquarium was any better. It was just different and wasn't what the audience or the US reef community was prepared for. 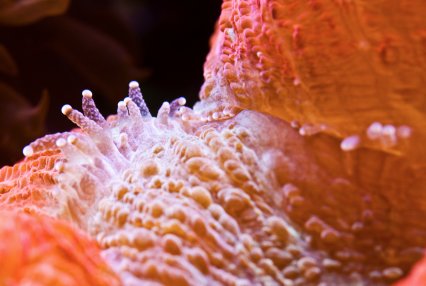 What’s your background in fishkeeping and what previous set-ups have you had?

Fishkeeping goes back to my childhood keeping goldfish and Tiger barbs. I worked in the aquarium industry from a very young age, scrubbing tanks at the local fish shop to creating aquatic layouts of all types with the Senske brothers at the Aquarium Design Group in Houston, Texas.

Having had the chance to work with and learn from Takashi Amano at the 2008 AGA awards ceremony,  I competed against some of the US's most accomplished aquascapers, such as Jason Baliban, in the second annual Iron Aquascaping Challenge.

I have recently designed some of the most popular LED light fixtures on the market for brands like Ecoxotic and Current USA/TrueLumen.

Having had so many opportunities to work with great people in this industry I can't think of a type of set-up I haven't had. It really has been a dream for as long as I can remember.

What do you do for a day job?

Currently I'm an interior architectural photographer, concentrating on aquarium installations. I spent much of 2011 working with Threshold Interactive, an agency based in Los Angeles doing photographic and some designwork for clients such as Nestle Water, Butterfinger, Universal Pictures, Sony and Pampers. One notable project was a horror film with Rob Lowe called Butterfinger the 13th.

What are your future set-ups or aquascaping plans and what would be your dream set-up if size or money were no object?

My future set-ups are going to be much more focused, both freshwater and marine. I'd like to try more single-species reef tanks and hardscape only, or minimalist freshwater layouts.

As for fantasy and money being no object, any healthy adult would want an indoor saltwater tide pool full of Acropora, clams and anemones - wouldn't they?

Of course my freshwater urges would need to be satisfied too. I'd love a massive minimalist hardscape-only aquarium with a few thousand Rummynoses and a partial leaf litter bottom.