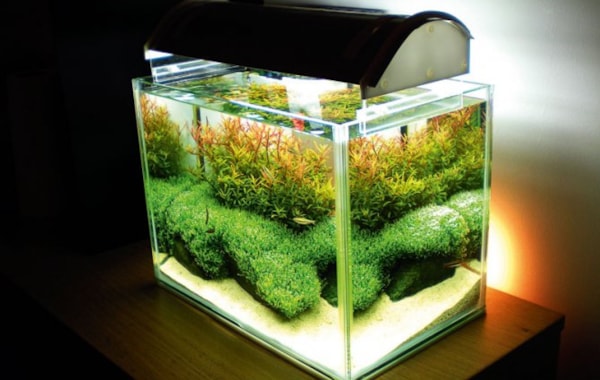 Your planted tank looks refreshingly different to many Japanese-style aquascapes. What was your inspiration for this set-up?

I made that decision while studying the portfolio of Takashi Amano. He is also a photographer of natural landscapes and looking at his pictures of Japanese hills, forests and mountains I could see the same shapes, textures and colours present in his aquascapes.

I decided to investigate natural scenes familiar to me and one outstanding image was an autumn sunrise I witnessed on the Dorset coast. I remembered the frost glistening on the grass at the tops of undulating cliffs and forest of autumnal trees further inland. I wanted to represent all of these key elements in my scape.

The fish selection is interesting, as they may outgrow the tank. If you have to keep something in the aquarium longer term what species would you choose and why?

Selection was down to colour. I wanted something subtle that would not detract from the scape.

I felt the dwarf pencilfish, Nannostomus marginatus, would be most appropriate but could not find them anywhere, so settled for their larger cousin, Nannostomus beckfordi, with a view to moving them to a larger home after about 12 weeks.

Smaller fish would have improved the aquascape’s overall sense of scale. 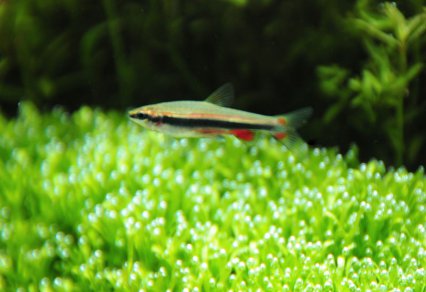 You are running high lighting levels on your aquarium with over 2w per litre of water. How do you ensure there are no algae problems with this set-up?

With high light comes a high likelihood of algae, so I started out with a very short photoperiod and gradually increased. CO2 levels were kept high with fertiliser and liquid carbon added daily from the outset.

A total of 60% of the water was changed each day in the initial stages, later dropping to 30%.

The plants were not pruned for the first few weeks and I used a mature filter, which does not instantly mature an aquarium but does speed up the process.

I had to clean green slime algae from the glass and rocks every day in the second week. At four weeks it had gone but was replaced by thread algae. However, by the sixth week I think the rampant growth of the Rotala had starved all traces of algae.

Some readers feel that nano aquariums are trickier to maintain and keep environmentally stable than larger set-ups. What’s your opinion?

Nano tanks do present additional challenges, mainly because small volumes of water are less stable than large ones.

This can pose some risk to the inhabitants and should be countered by some research.  A vast knowledge base is available to the potential nano keeper, including internet forums where experience is shared.

I feel nano tanks give the impression of a living ornament rather than an aquarium. If aquascaped well the illusion of space can be created within even the smallest of tanks.

Your plants must be fast growing in such a small aquarium with high lighting levels. How often did you maintain the tank and can you explain your pruning technique?

The plants grew fast, but I felt it best to avoid algae problems associated with a low plant mass and did not prune all the plants at once. I adopted a circular technique, whereby a few of the tallest Rotala stems were cut as low as possible every day. This eventually gave rise to a constant growth cycle and the plant looked healthy at all times.

The Riccia had to be pruned once a week and at a thin layer at a time. If you attempt to cut the desired thickness in one snip you risk lifting the whole lot off of the rock.

I syphoned off the top layer of sand once a week as part of a water change as it discolours if left. Doing this required the sand to be topped up once a month to restore the aquacape’s proportions.

With such high light levels maintenance is increased, but as the tank is small most tasks can be completed in a few minutes. Without these light levels I don’t think I would have achieved the dense Riccia or red Rotala growth necessary for this type of aquascape. 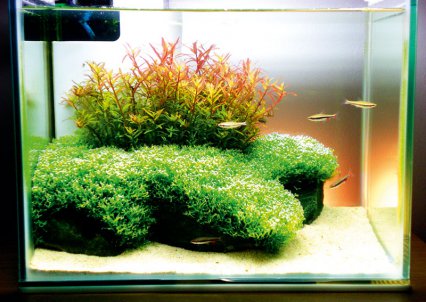 What carbon and other nutrient additions did you add to this tank and what was your water change schedule?

CO2 was added at one bubble per second via a pressurised system.  It was switched on with a solenoid valve one hour before the lights and switched off with the lights.

Daily water changes of 30% were always performed before the CO2 and lights came on to avoid sharp fluctuations in pH during the photoperiod.

How did you set the tank up in terms of installing susbtrates and planting?
The Riccia was tied directly to the rocks with fishing braid. I used 2-3m/6.6-9.8’ per rock to ensure the Riccia stayed anchored.

I also chiselled grooves in the rock to hook the braid around, so none was visible on exposed areas.

The rocks were placed so that Eco-Complete substrate could be piled behind and sand in front without risk of mixing. I then carefully half filled the tank and planted individual Rotala stems in the Eco-Complete.

What advice would you give to beginners who wish to replicate this style of aquarium?

Do not attempt to copy nature, but try to represent it more graphically. Study a natural scene you find appealing and pick out only the most striking shapes. Consider plants and hardscape that will best match these and make some sketches.

Include strong lines, definite shapes and fine textures in your design and you won’t go far wrong.

How much did the entire set-up cost you?

It came to a total of about £350, which does seem a bit pricey, but then pressurised CO2 systems and lots of T5 lighting don’t come cheap. However a similar-sized low tech planted aquarium can be set up for well under £100.