When James Findley planted a long, shallow aquarium such set-ups were opening up a world that allowed the aquascaper's imagination to run riot.

James Findley, professional aquascaper and founder of The Green Machine, has found that shallow aquariums are not only incredibly fun to work with, but they also make it very simple to achieve outstanding results.

These shapes also present ample opportunity for individual experimentation and creative artistic interpretation — this James' work, titled Tributary, demonstrates just what can be achieved with these unusual aquariums.

He chose the 120 x 30 x 20cm/48 x 12 x 8" ADA Cube Garden 120-F tank for the project as "shallow tanks provide a fantastic opportunity to do something a bit different and to really experiment with aquascaping in a fun and inventive way."

James adds: "Variety is one of the things I love about aquascaping and pushing the boundaries is what makes it so fun and exciting!"

He particularly enjoyed working on this size of aquarium because he could experiment with emergent plant growth and placement of aquatic hardscape outside of traditional parameters.

"This creates a dual perspective, in which you can see both below and above the waterline.

"Each aspect is equally as beautiful, adding a whole new dimension to it all." 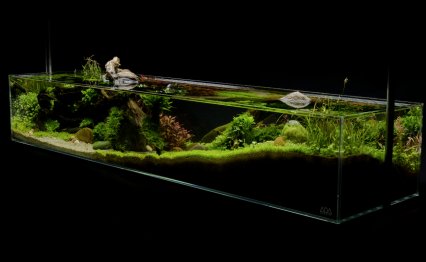 James wanted to explore the microcosm of nature and the way that sometimes the smallest, least obvious things in life can be the most beautiful and awe-inspiring, yet so often go completely unnoticed.

He entitled this project Tributary because it focuses on the smallest element of the stream and celebrates the beauty of what is often overlooked.

The end product is certainly original and one of the most striking elements is the way in which he has banked the substrate high at the two diagonally opposite corners of the aquarium. This helped to create the feeling of a tributary in which the natural flow of the stream results in greater depth in the centre.

He chose to position the outflow lily pipe in the centre of this rivulet to add authenticity and recreate the natural flow pattern of a tributary.

Since these tanks are very shallow they can easily be lit by fluorescent lights, which use less energy than metal halides.

"When we saw this tank set up in the Green Machine we loved it," says PFK editor Jeremy Gay.

"It had stacks of visual appeal, despite it having to share the same room as many much larger aquascapes.

"James did exactly what we would have done wth a project like this, with immerse plants and exposed wood, and although the tank’s dimensions initially seem odd, it does give a very fluvial dimension and lends itself perfectly to being stream like — and with suitable stream fish. 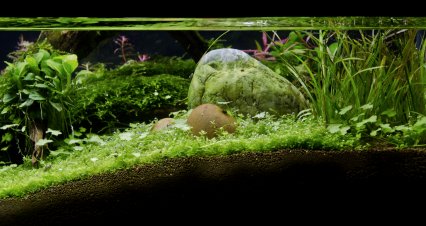 Substrate additives: Not essential, but James uses them because he finds they make the aquascapes easier to maintain and increase their longevity. About one quarter of each of the following were used: Penac P at RRP £37.99; Penac W at RRP £37.99; ADA Bacter 100 at RRP £25.99; ADA Clear Super at RRP £26.50 and ADA Tourmaline BC at RRP £24.26.