When a gigantic marine tank in the basement was costing too much to run, one aquarist had to let his livestock go. But what cheaper alternative could give the same impressive impact?

I  had a fish-only marine aquarium. A big one. 5450 litres of big, but that was just the tank. Add the filtration and it was 6040 litres for the system total. Even if I say so myself, that tank was glorious. It housed no less than six angelfish species, some of these pushing a foot in length, around 15 different butterflies, and three triggers, all living alongside tiddlers like tilefish, firefish, chromis, and orange spot filefish.

The size of tank was letting me get away with murder regarding my species mix. It allowed the so called ‘impossibles’ to thrive — a Regal angel, a Moorish idol, an Achilles tang, and various of the tricky butterflies. I was justly proud.

It wasn’t representative of any geographical area, nor was it in any way a biotope. It was a collection, in much the same way that in the early eighties my shoebox filled with novelty erasers was a collection. Instead of a shoebox, my aquatic collection was kept in a glass box. 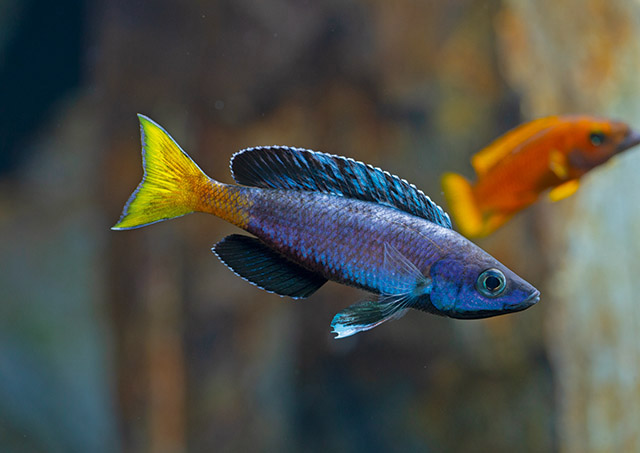 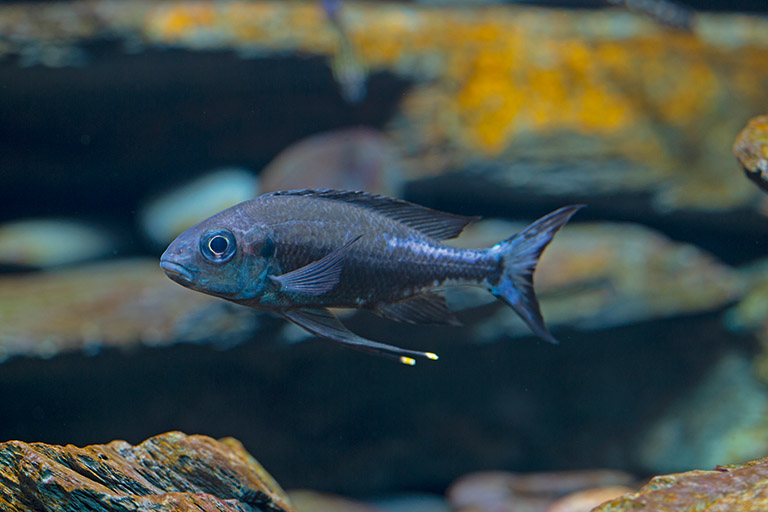 Check out the amazing ventral fin tips of Opthalmotilapia boops. 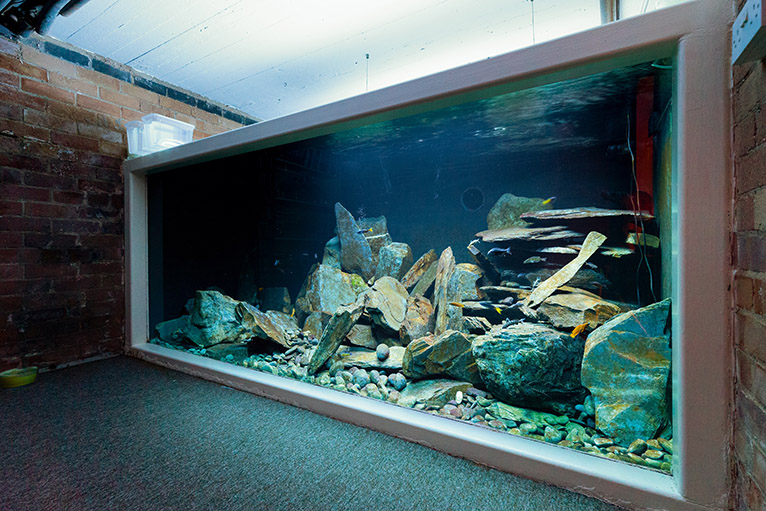 The tank dominates the basement.

Unfortunately, along with the gaudy display of nature’s masterpieces went running costs that would frighten an oil baron. The huge skimmer fitted with no less than six pumps (plus the pump feeding it), a filter pump, circulation pumps, and 25kg of salt per waterchange, all created a financial burden. It was unsustainable, so I closed the tank down and the fish went to live with a fellow in Preston.

The tank became a dark void occupying a space in the basement. It gradually metamorphosed into a storage space, filling with junk. The rest of the room quickly followed suit, and adding to this the fact that the room had no windows, it soon became a depressing space within my home.

After a couple of years of trying (and failing) to ignore it, the thought of that tank kept popping into my head more and more, until I had to do something about it.

I wanted something cheap to run, easy to maintain, but also captivating. I understood whatever fish went in there would never compare to the wow factor of their predecessors, but maybe I could compensate with décor.

I toyed with the idea of a brackish layout, with an intricate maze of mangrove roots but was concerned that this would still involve salt.
I also worried that it may become a slippery slope, especially as fish matured. I wanted to avoid plants due to lighting restrictions (dictated by the depth of the tank), plus the obvious awkwardness of maintenance. Then it hit me — Rift Valley cichlids. 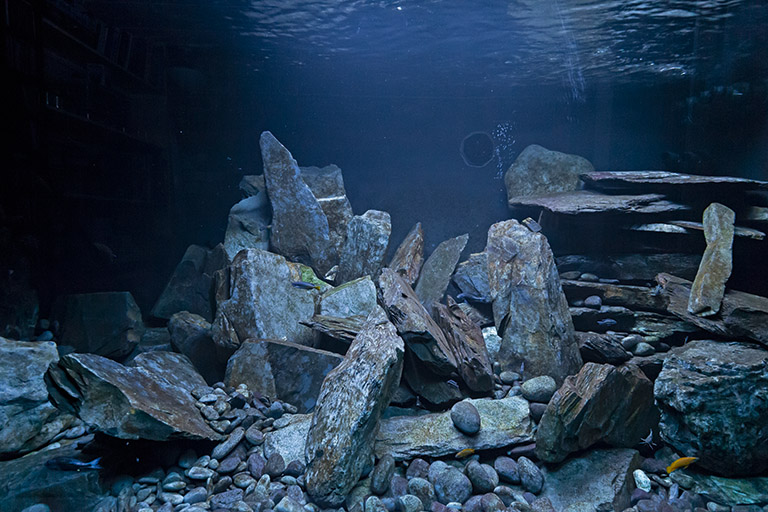 Blue adds a sense of depth.

We will rock you

Rocks, loads of rocks. To be more precise, slate. Loads of it. I figured that I could create a dramatic yet maintenance-free aquascape in which fish could dart and hide.

Here’s the strange bit — I’m not particularly a fan of cichlids. Yet here I was planning what could easily be amongst the largest cichlid aquarium in the country. However, as mentioned before, this time it wasn’t to be all about the fish.

It was about the aquarium as a whole, the living picture.

After discovering the startling price of having this amount of rockwork delivered by a stonemason, I had to find another source. A couple of messages on social media soon sorted this, and within a couple of days I was off to see a friend of a friend with some land in Wales with slate on it. About £90 for van hire and fuel seemed pretty good. Until I reached my destination, that is.

The landowner kindly showed me the slate, which was a tumbled down old outbuilding built from rectangular cut slate blocks, which I stared at in despair. I could have been terribly British and polite, popped some of the blocks into the van and waived a thankful cheerio. However, this was just too much and I had to explain that as it was for an aquarium, I wasn’t really wanting to fill my tank with a pile of blue bricks.

Fortunately, there was more land of hers which had some natural slate, but it was thinly spread and took until dusk for me to gather enough for my requirements.

It was a backbreaking exercise carrying huge chunks from the roughly 1km2 sloping plot.

Equally backbreaking was unloading it back home and my spine took a hammering loading it into the aquarium. At least I was pleased with the finished result!

The rockwork had only been briefly washed with a hosepipe and hand brush, and the filter needed flushing through from years of marine use, so I filled the tank and ran it for a few days before draining it again.

I should offer a brief description of the aquarium and build.

The room that the aquarium sits in is directly under my kitchen and has an identical footprint, measuring roughly 12ft long by 10ft wide.

For the 10ft width at the end of the room — the back, the sides, and the floor were lined with polystyrene and marine ply, encroaching 4ft8in into the room’s length.

In front of this a steel frame of 4in box section steel was welded and secured in place. Ply was then fibreglassed and the fibreglass taken onto the steelwork.

Directly behind the wall of the left-hand side of the tank is the underside of the basement steps.

A section of the wall was cut away from the basement hallway and the new cavity that this created was then lined in a similar way to the main tank.

A brick was removed at the water level between the tank and filter, and the fibreglass passed through this letterbox-sized aperture to make the filter and tank a single unit.
A sheet of 25mm glass was rested against the steel frame on a bead of silicone completing the box. Hey presto, a great big fish tank!

Water is pumped from the tank to the top of the filter, which extends from the basement floor to the top of the cellar steps under a trap door. Water trickles over a sheet of floss, through alfagrog (acting as my biological filter) and finally returns upward via a channel and out through the letterbox into the tank.

The main tank measures 10ft long, 4ft8in front to back, and is 4ft3in high. After refilling the tank, it was left to cycle, giving me time to focus on which fish to stock. Up until now I was pretty happy with the tank. Running costs were reduced to an 85W pump which fed the filter (giving a 1.5 times per hour turnover), a couple of circulation pumps of negligible wattage, and a couple of heaters in the filter that only occasionally came on due to the aquarium’s heavy insulation.

So far the budget tank was working out well.

I soon came to realise that Rift Lake cichlids, whilst not expensive as such, were still pricier that run of the mill tropical fish. Considering the size of tank to fill, it would soon all add up.

I decided on Tanganyikan fish rather than Malawians, simply because they are quite un-cichlid like, which obviously appealed to someone not overly enthralled with cichlids. An added bonus was that my tap water is fairly hard, suiting these fish nicely.

I soon noticed that Tanganyika had many inhabitants that were very marine-like in appearance. Indeed, names like ‘Sardine cichlid’, allude to this, while Altolamprologus species are reminiscent of the smaller grouper species.

Then again, Lake Tanganyika is more of a landlocked freshwater sea, and many of the cichlids have evolved to fill similar niches to their marine counterparts.

My next step was to source fish at a competitive price, but with plenty of choice. A bit of button pressing on the internet lead me to a phone call with Mike of Mike’s Rifts. A lengthy chat was had, and a couple of key points lodged in the final decision-making process.

To wit, if I wanted to fill the tank with a load of bold, brash, plug-in and play cichlids, then go Malawi. Alternatively, Tanganikans should be treated very much like marine fish regarding temperament, dedication of care and diet. Mike mentioned that the size of my tank would help with the latter, as would the quantity of décor. 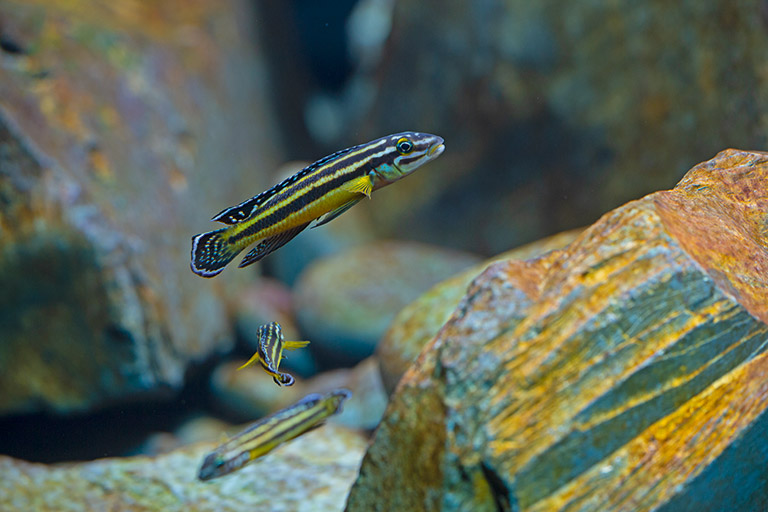 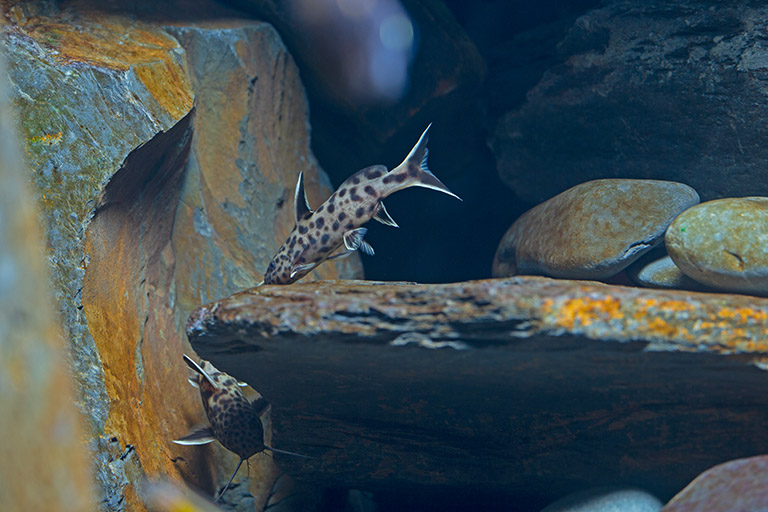 Ever since having kept marines, I noticed that the larger the aquarium, the more murder you could get away with, and it was time to try my luck with the new set-up.

Ophthalmotilapia boops is a fish that is strictly ‘one male per tank’. Never ever put more than one in the same aquarium. I took a couple of those. You should have no more than a single trio of Julidochromis, so I snapped up three trios.

A pretty long journey to Mike’s Rifts, and parting with some £300, landed me a disappointingly small catch — a shoal of Cyprichromis leptosoma; some Julidochromis transcriptus and regani; a couple of Altolamprologus calvus and a group of Neolamprologus leleupi. Initially, this motley bunch shoaled together for safety until becoming more accustomed to their new world.

A few months later and a bit more dosh saved, I was off to Mike’s again. Fortunately, despite the long journey, he’s only 15 minutes away from Pier Aquatics, and it would be rude not to.

This visit saw me purchasing more Julidochromis, and splashing out on a few Paracyprichromis nigripinnis. Between Mike and I we decided that two male Ophthalmotilapia boops should coexist, as they had enough space to set up territories at either end of the aquarium.

Later on, a closer-to-home purchase was made at Wharf Aquatics when I spied some large Paracyprichromis nigripinnis at a very reasonable price. Eight were purchased along with a shoal of ten charming little Synodontis petricola.

Admittedly the tank still looks sparsely stocked, which I kind of like as it adds a bit of mystery to the gloom, plus it’s a more realistic depiction of the lake itself.

I particularly like the neon markings on the nigripinnis which, under the blue lighting, give off an almost ‘rave cave’ memorizing glow, and unlike what I’ve read about them read, they are always on show.

The Ophthalmotilapia boops never fail to impress with their shadowy bodies, blue glowing streak and almost illuminated yellow spots on their ventral fin-tips. Their high-octane lifestyles add plenty of action to the set-up, whilst the more sedentary Julidochromis meander in and out of the many caves claiming territories. The Synodontis are always playfully scuttling about, while the Neolamprologus buescheri stake their territories over the rocks, just under a shoal of Cyprochromis leptisoma filling the void above.

All in, with the exception of the Ophthalmotilapia boops, this is now a serene tank, and I spend many hours smugly patting myself on the back for making the correct decision in setting it back up. It’s extremely low maintenance with its low bioload, meaning less large water changes, and a tub of specialist flakes caters to their daily feeds when I’m not treating them to a bit of frozen fare.

Curiously, I’m still not a massive fan of cichlids, but this set-up is about as un-cichlid like as I can imagine. It harks back to the marines that used to live in it, minus the inherent costs and upkeep.