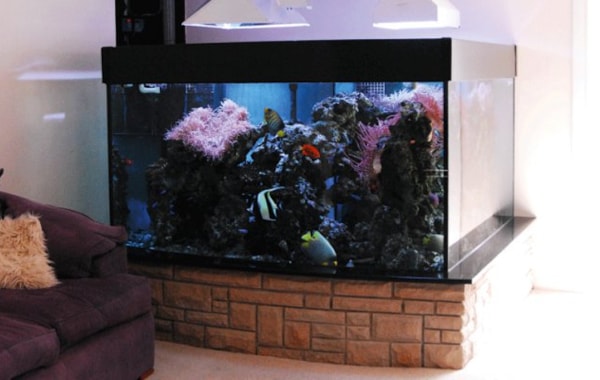 Successfully mixing marine angels just can't be done, or can it? Les Holliday meets Derek Armstrong who used skill and guile to make it happen.

Angels are among the most coveted marine fish, favoured mainly for their markings, bright coloration and dominant personalities. However, while there’s little doubt about the popularity of the Pomacanthidae group, few can successfully claim to have kept specimens for more than a handful of years.

Most experts agree that mixing angels of identical or similar species in the same tank is usually quite out of the question, but Derek Armstrong has successfully kept eight large and small ones, together with 22 other fish, in his eyecatching display.

The ground rules for keeping angelfish are dictated by the fact that many species are particularly sensitive to less then perfect water conditions. They can rapidly fall victim to various diseases in times of deteriorating water quality, often losing interest in feeding and quickly succumbing.

Not for beginners
Few angelfish species can therefore be recommended to beginners, as a good grounding in feeding and water management skills are necessary to acclimatise most species to aquarium life.

What makes angelfish most challenging to keep though is their highly territorial behaviour and many species are intolerant of their own kind or similar species. In average aquarium conditions this limits the number which can be kept together and normal practice dictates only one specimen can be kept safely in a single tank.

How then can Derek keep together a sizeable number of relatively territorial and aggressive angelfish, some of which have thrived in his 1,950 l/430 gal tank for a long time?

The answer, it seems, has been to address each difficulty and apply the necessary counter measure. 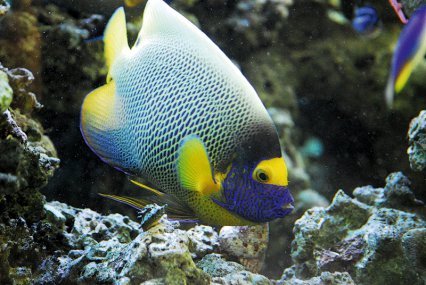 Derek first had to achieve sustainable, high levels of water quality which he accomplished by designing and building as large a tank as he could manage to fit into the corner of his living room. Large bodies of water are more stable and have a much greater dilution effect on any organic pollution in the aquarium.

A further measure to ensure water was kept at low nutrient levels was to treat essentially a fish-only system — combined with an anemones — as a full blown reef tank, with all the reefkeeping equipment usually provided to sustain corals.

The large amount of live rock in the system not only serves as an excellent biological filter but is purposely arranged to break the tank into several separate areas to allow all of his particularly aggressive angel specimens to establish their own territories.

Derek finds that in such a large tank this arrangement diffuses a lot of the aggression caused when fish with highly territorial behaviour are constantly defending space.

Members of the Pomacanthid family, they are bottom feeders browsing among live corals and rocks for the sponges and algae which form their main diet, and many are quite destructive. Any mix of sessile invertebrates attached to the substrate and live rock has little chance of long-term survival.

Settling in
Encouraging newly introduced angelfish to become involved in a feeding process alien to their normal mode, however naturally, creates difficulties as many adult species are reluctant to accept normal foods available to marine aquarists during initial settling in.

Derek overcame this problem simply enough. He believes that a tank with a good-sized population of fish quickly initiates a feeding response in new introductions as they soon learn what can be recognised as food in the general frenzy at feeding times. 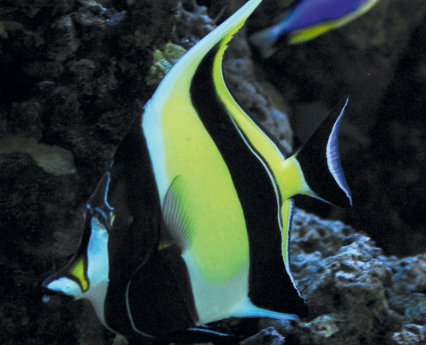 This approach has worked very well for Derek with really finicky feeders like his Regal angelfish, Pomacanthus diacanthus, and a pair of Blue-faced angels, P. xanthometapon, as well as with other difficult to acclimatise subjects such as his Moorish idol, Zanclus cornutus, which thrives despite a reputation for being difficult to feed and short lived in captivity.

Derek’s highly successful system has proved that the seemingly impossible can be achieved even against conventional wisdom, provided you use a meticulous approach and well observed husbandry processes.

Derek’s tip
Derek adopts a particular trick to encourage new introductions to feed, offering little but often, up to a dozen times a day.

He finds this accelerates the acclimatisation process, but water quality can suffer as a result.

During these multiple feeding periods he steps up water changes, having experienced a swift rise in nitrates up to 100 ppm once in the past.