Your tanks: David Le May 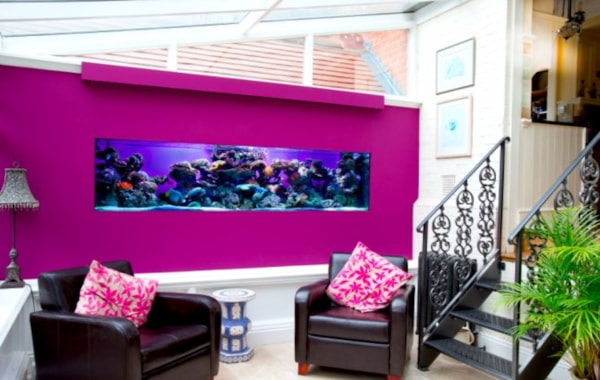 When it comes to running an aquarium in a conservatory, things can get pretty tricky. Here, Jeremy Gay meets a reefkeeper who has successfully combined the two...and there's a video at the bottom of the page!

While a conservatory may be a seemingly natural place for a fishkeeper to site a tank, the battle against major influences such as excess heat and light is not for the faint-hearted.

So why, with such a large and beautiful house in Hertfordshire, did David Le May decide to do just that? The answer is simple: it’s the only place he could fit an eight-footer! And as conservatory tanks go, it’s a stunning example, full of large, active fish (scroll down for video). 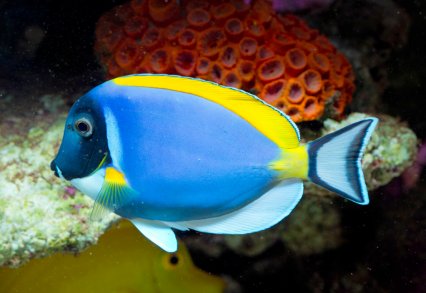 David got into marines late and has only been reefkeeping for eight years. He had tropicals when he was younger and a pond at every house he lived in until this one. Then, having seen a friend’s reef tank he was hooked and soon set up a five-foot reef tank complete with sump and equipment. It was his first tank in 30 years and later led to the eight-foot reef tank you see here.

When it comes to bespoke hole-in-the-wall tank builds, it helps when both your son and son-in-law-to-be are builders. They, in fact, created the tank and the brick-built tank room behind it for David’s 70th birthday. The tank truly is a family affair too, as David’s 17-year-old grandson is also into all things reef and looks after the tank whenever he is away on holiday.

When you descend down the steps into the conservatory during the day, you’re greeted first by the rich purple wall and secondly by a matching purple blind covering it. This is to obscure all daylight.

Without it, Dave says algae would be out of control, especially in the long summer days. As you might expect, he runs a chiller too. 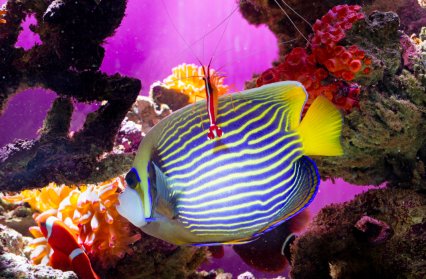 With a push of a button, however, the automated blind raises to reveal the long tank; its length is accentuated by the linear hard coral formations of the Montipora and lots of large fish swimming up and down the tank. "Ahh, an Emperor angel," I exclaimed. "That’s one of my favourite fish, but doesn’t it pick at your LPS corals?"To which Dave replied: “I’ve had two angels before, but this one is a rogue. I can’t have any Elegance corals because of him and he eats all my zoas. I had some beautiful zoas but they just end up as expensive meals.”

Some LPS corals have been strategically placed at the surface, out of the Emperor’s reach, and in among a forest of branching Acropora. There’s a Regal angel in the tank too, but they’re known for being better behaved with corals than Emperors, and Dave’s had no trouble.

Angels are some of Dave’s favourites and he admitted to having many more before a serious wipeout. He also likes tangs and butterflies, but the latter ate his corals, and when he added Copperbands to control Aiptasia they all starved to death. So, when it comes to butterflies and his experience with them, Dave admits that most have had disastrous consequences and that in a perfect world he would have two tanks: one fish-only and one for corals.

To safeguard against future wipeouts David now runs two UV sterilisers and an ozone unit, but the latter just runs for a couple of hours each day. The tank is full of large specimen fish now, so David avoids even looking at fish in the shops and just adds corals instead. His shop of choice is Home Marine in Enfield, a store that is well known for its marine expertise. 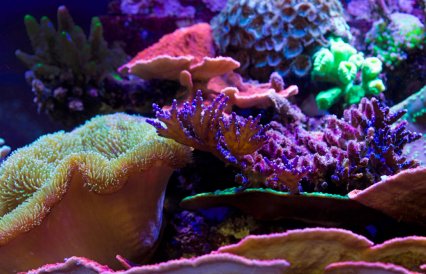 All of David’s equipment is labelled and he runs a Seneye Reef and LED lighting — AI Sols are daisy chained together then run on a wireless adapter that goes through to his kitchen. At the time of our visit, he was eagerly awaiting the release of Aqua Illumination’s latest gadget, named the Director.

We didn’t visit at the best time as the strong daylight can wash out some of the rich colours enhanced by the Sol lighting. David said that at night-time the tank is transformed and is incredibly bright, and I believe him. If I ever get to see the tank again I’ll make it a night-time visit for sure. 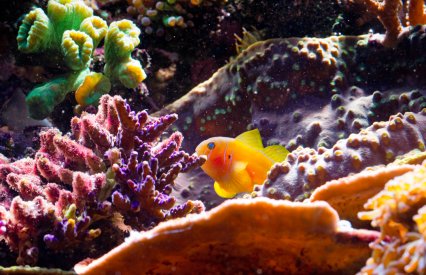 The tank had been set up for 15 months when we visited, and, when asked, David said there isn’t much he would change if he had the chance to do his current tank again. There’s no equipment on show, adding to the hole-in-the-wall, slice of reef effect and he’s hidden the central glass weir pretty well too. He didn’t fasten his live rock together so admits he would probably revisit that because he does get the odd rock fall, both when maintaining the tank and when coral growth causes the rocks to become top heavy.

He would possibly consider a tank that is wider front to back, upgrading from 60.9-76.2cm/24-30", although that would leave him with less space in the tank room. He’d keep the height the same; his previous 1.5m/5' reef tank was 76.2cm/30" tall and he couldn’t work on it. He does have to work from behind the tank

with this one being hole-in-the wall, although, again, there was a blind at the back of the tank, providing a backdrop.

The blind also raises up completely out of the way, leaving a clear back glass so Dave can see what he’s doing when maintaining the tank and placing corals. The background blind is purple to suit the front blind and surround.

Our camera flashes picked it up as being quite coralline algae in colour, only when you see the tank in the flesh and with limited light spill from the LED lights, the background appears a much darker blue and disappears into infinity. 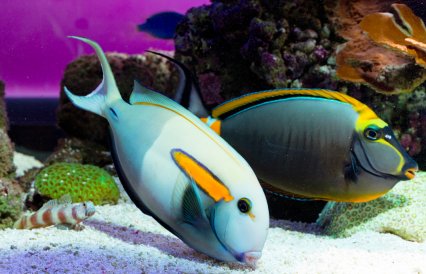 The marine tank is David’s retirement hobby; he’s invested a lot of money in it already but luckily, he has the time and patience to be able to stick at it and to take the rough with the smooth. He says that lots of people give up with reef tanks because of the costs and not having enough time. His tank needs minimal maintenance and he changes just ten gallons of water per week, which he can do via pumps. He’s got an automatic feeder to regularly dispense dry foods and then hand feeds frozen foods and uses the D-D paste foods.

Stable water parameters and regular feeding has made the care of most species straightforward, including a population of four Scooter blennies. The Maroon clowns spawn every two weeks, the red Bubble-tipped anemone has split into four and many corals have grown large from small frags. The cleaner shrimp do a great job of climbing over the large fish at the cleaning station and one shrimp is five years old.

Despite having a very large Orange shoulder tang and the two angels, David says that it’s the Purple tang that is the boss of the tank, and when the lights go out every night he still asserts his dominance over other fish in a display that Dave terms 'Battle Royal'. Despite the weaponry of both surgeonfish and large angelfish, he is amazed that they never physically touch and hurt themselves.

So what do I think of the tank? I love it, and there is no denying that with the miniaturisation of tanks these days, nothing really does it like a great big reef tank, with room to stock lots of colourful fish and room for them to exercise. It’s never too late to start… 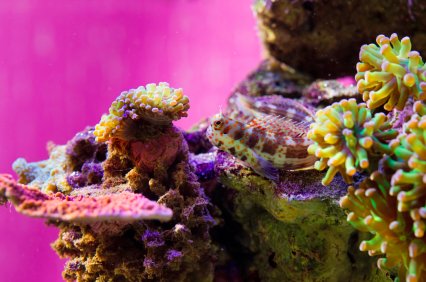 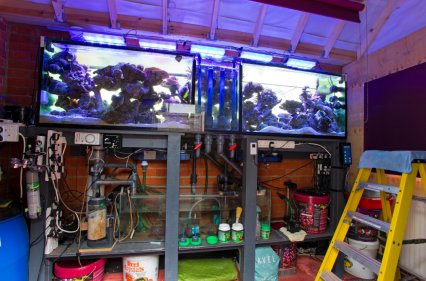 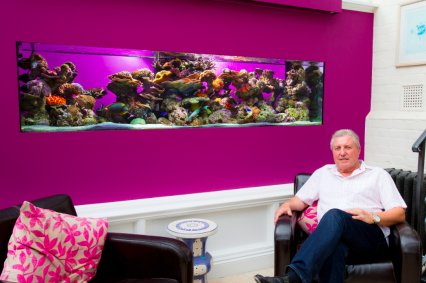 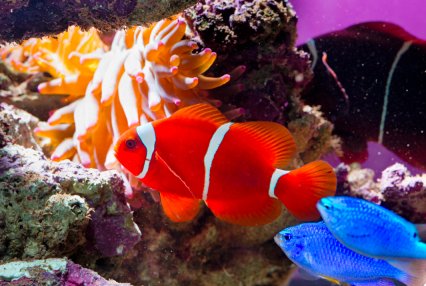 Check out the video of David's conservatory aquarium in the video below: