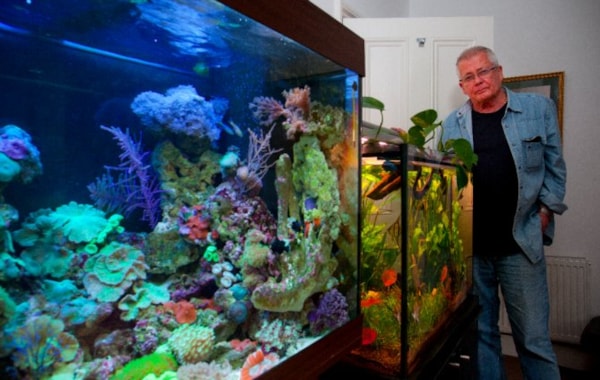 After creating various set-ups and being naturally green-fingered, an aquarist has successfully overcome illness to present two tanks of truly mouthwatering fishes. Nathan Hill pays a visit to Barry Cranwell...

The home of Barry Cranwell is a joy to visit. He plays the perfect host in delightful settings and his taste shines through as antiquities blend effortlessly with modern to create something very unique.

If Carlsberg did reader visits, then this would be the benchmark.

Marine and freshwater set-ups reside in his bedroom overlooking a smart and airy London courtyard. Placed aside a heavy wooden desk, they are the ideal work, rest and play accompaniment.

Barry is an old acquaintance of Practical Fishkeeping and his tanks have on our website, as well as our pages, and being asked back to see his latest projects was an invitation we eagerly accepted.

Previously he has been a committed Discus keeper, but severe illness threatened to end his hobby, so he sold them and all the associated equipment to facilitate a swifter recovery.

In the months after being released from hospital, Barry couldn’t lift a bucket, let alone commit to strenuous plant trimming and filter maintenance.

Eventually, despite his debilitations, the aquatic bug began to gnaw away once more and on considered medical advice he was allowed to return to the hobby. Here are the results...

Return to marines
Barry is not new to marines, but his previous attempts fared badly and he consolidated his efforts to bring out the best of his Discus instead. Now, having returning for another try and with lessons learned he has put together something both admirable and thriving.

As a huge fan of tangs, but reluctant to take the clichéd option of Yellow sailfins, Barry has opted for lesser-seen alternatives that carry a price tag probably best taken in smaller doses. 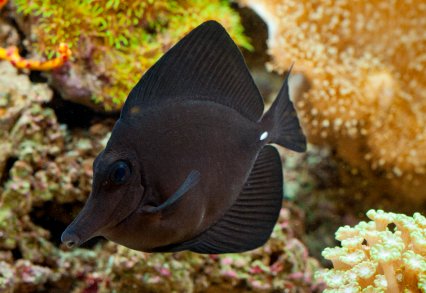 First to greet me in the new set-up was the Hawaiian black longnose tang, Zebrasoma rostratum, which is not a light investment. 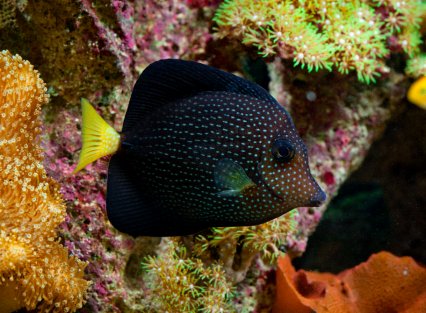 Yet even that fails to stand out against the devastatingly pretty Gem tang, Zebrasoma gemmatum. Although reluctant to reveal a price for them, Barry holds that these fish were won in a poker game. The stakes would have definitely been high…

Other inhabitants include a rather brazen Yellow-eyed tang, a pair of Pyramid butterflies, and a Black pygmy angel. 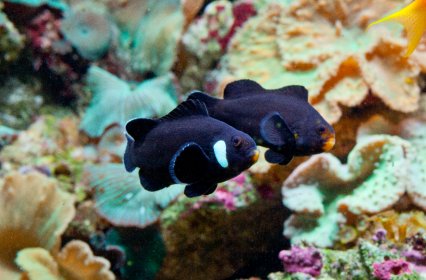 Less peacefully, two pairs of clownfish — one platinum and one jet black — currently squabble for space at one end of this generous 150cm/5’ tank.

The tank itself is a Juwel Rio 450 having had minimal tweaking. Underneath it live two Eheim Professional canister filters, stripped of all synthetic media and now brimming with live rock — with much more live rock sat inside the tank too.

The Juwel filter sits inside the tank, equipped as standard with its multiple foams and ever-working mechanical filtration. In tandem, the filters are doing well at keeping things visually very clear and floating debris was conspicuously absent here.

Currently, a Juwel skimmer is working hard at the rear corner, but Barry isn’t happy with its performance, opting to replace it soon with a Deltec MCE600 external hang-on model.

Lighting for the thick swathes of corals inside is addressed with a single OT2 luminaire by Arcadia. A complement of colours and photosynthesis is achieved with two blue — toward the rear — and one white and one pink tube.

All lighting is in T5 format, giving a nice high output compared to their thicker cousins.

The tank is definitely ‘soft’ heavy and, with the exceptions of the Yellow and Green trumpets, there are no other hard corals present. 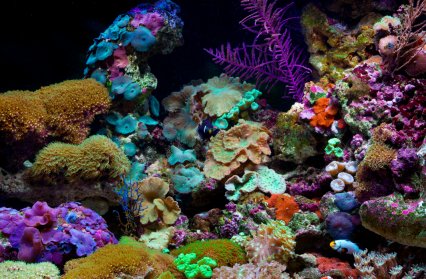 Understated fish
This is an unusual display, as in many marine tanks I’ve seen there’s almost a power struggle between the colours of the fish and the invertebrates. However, Barry has opted for fish that although of high value are understated in their surroundings.

Instead of trying to punch through the visual mosaic behind, as some keepers will expect their fish to do, these species are almost an anti-setting. Most importantly, they are also more than happy with their lot.

Tank maintenance is straightforward enough and Barry undertakes a 25% water change every week — and apart from some trace elements the only additive is a live plankton liquid that’s always kept refrigerated. 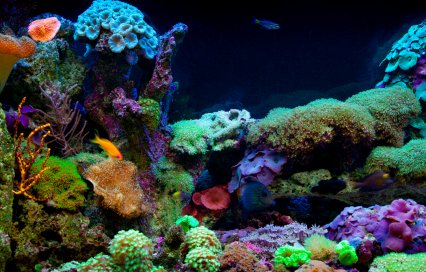 Barry maintains that a logbook is an indispensable item in the aquarist’s tool kit and he keeps records of everything he does; additions, losses, supplements, water changes and, critically, his tested parameters. A glance shows water conditions that run on average at 1.021 salinity, 1mg/l phosphate, 420mg/l calcium, 1350mg/l magnesium and a reading of up to 10mg/l for nitrate.

He likes to keep his tanks understocked and overfiltered, and during my visit Barry often asked me if I felt the tanks were too crowded. Far from it!

Even so, he intends to upgrade and has designs for a custom-built 180cm/6’ Optiwhite aquarium to occupy a different room and replace his existing marine set-up.

Here Barry intends to have a committed sump/refugium as an integral part of the assembly. Although he has been informed by numerous sources that Miracle Mud would be superfluous, he still intends to incorporate it. 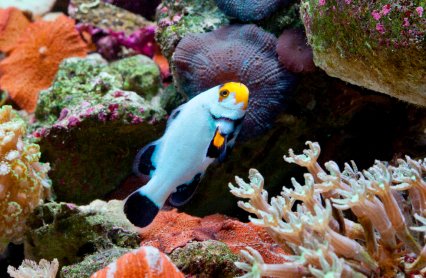 His only issue with the set-up as it stands is the behaviour of the rambunctious clownfish.

Despite the generous size of their home, they still quarrel over their shared living space and Barry concedes that one of the two pairs will need to be removed for the sake of harmony all round.

The tangs have their own pecking order, with the Black popping at the Gem, and the Gem popping at the Yellow-eye. However, for all of their show, they cohabit with minimal aggression. 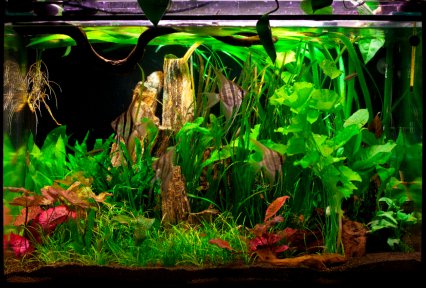 Freshwater leanings
Less prominent of the two aquaria, yet stunning in its own right, is his planted freshwater display.

For an aficionado of both marine and fresh like myself, it’s hard not to sit centrally, eyes flitting from one tank to the other, as though I’m caught in some bizarre aquatic tennis match.

At first glance, the 90 x 60 x 60cm/36 x 24 x 24” Optiwhite planted display appears devoid of any fish. However, like camouflaged soldiers lurking in among the dense rearward foliage, you can soon make out the tall, elegant shape of Altum angelfish eyeing you with caution through the lengthy grasses.

These are F1s, first generation tank-bred fish that Barry proudly proclaims originated from Tony Tan and were acquired through Chen’s Discus. They are well settled, although appeared a little disturbed by my intrusion.

Some food, however, soon replaced any initial fears as they darted forward to gorge themselves.

Dashing about like colourful birds among this jungle canopy are complementary and subtle colours, with Ember tetras, Hyphessobrycon amandae and Madagascan rainbowfish, Bedotia madagascariensis acting as peace-bringing dither fish to attract the Altums into the open. 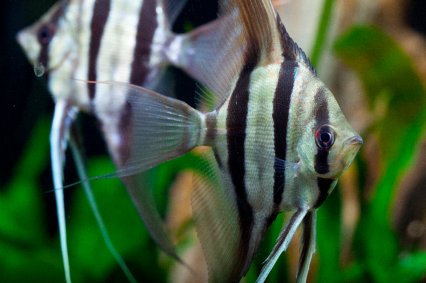 Low-tech greenery
Care needs to be taken to see the wood for the trees and Barry’s aquascaping is impressive, with a low-tech approach to plant care and maintenance.

He shuns CO2 as much as he disregards liquid fertilisers. Instead, Barry places faith in the nutrient delivery of the Aquagro Nutrasoil substrate that sits two-tone at the bottom. The soil also reduces pH in the aquarium, bringing things down to a particularly Altum-friendly level of 6.0.

To combat algae, Barry relies on his tried and tested ‘siesta’ method, whereby the lights are turned off for a period throughout the day, giving any growth a much-hated break in its photosynthesis.

Does this work? It’s doing wonders and had stood the test of time in Barry’s previous plant-heavy Discus aquaria.

Lighting in this aquarium runs from 9am to 1pm, goes off until 5pm then returns until 10pm. Given the working day of many aquarists, this might be something to consider if you’re out all day…

Aside the planting, the only décor is petrified wood, which Barry had since his last aquarium.

I’d say this showed a more minimalist approach, but given the sheer abundance of cover available to the fish it would be a mistake to do so. Think of it more as an ‘explosive minimalism.’ 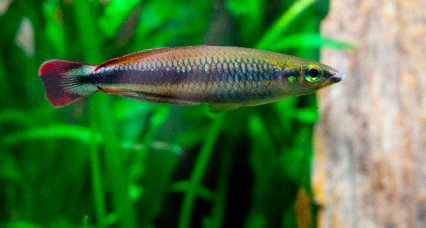 The tank is filtered by an Eheim Professional 3 thermo which also keeps the water riding at a generous 28-29°C/82-84°F. Lighting is courtesy of two Dennerle lamps, a T5 Super Colour Plus, as well as their Special Plant tube, placed centrally over the open-topped tank. This gives a reddish-violet hue, which makes a welcome change to the usual oppressive glare associated with a heavily planted system.

Given that the whole project is actually derived from what was originally the quarantine area for Barry’s marine aquarium sitting directly next to it, he has achieved something quite special.

So busy does the display turn out to be that only at the last minute of my visit did I notice a young algae shrimp scamper into view, grab at a single nugget of food left by the Altums, and disappear radily back into the rampant growth… 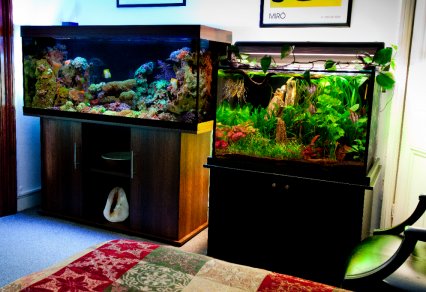 Barry’s parting observation to me was that fishkeeping is supposed to be relaxing, but he argues that in reality it is actually very stressful yet riddled with relaxing moments.

Looking at his fabulous aquaria, I’m only glad that we at this magazine just get to appreciate those special relaxing elements…

See some of the other great planted tanks in the Your Tanks section.

Or if marines are your thing, why not take a look at some of the other fabulous reef tanks featured on the PFK website: