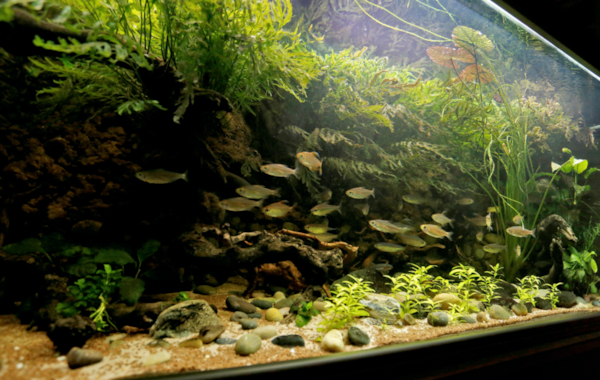 Nathan Hill meets a fishkeeper who has strayed from the usual selections of fish in favour of a biotope from Africa — a continent that’s woefully under-represented in the hobby. 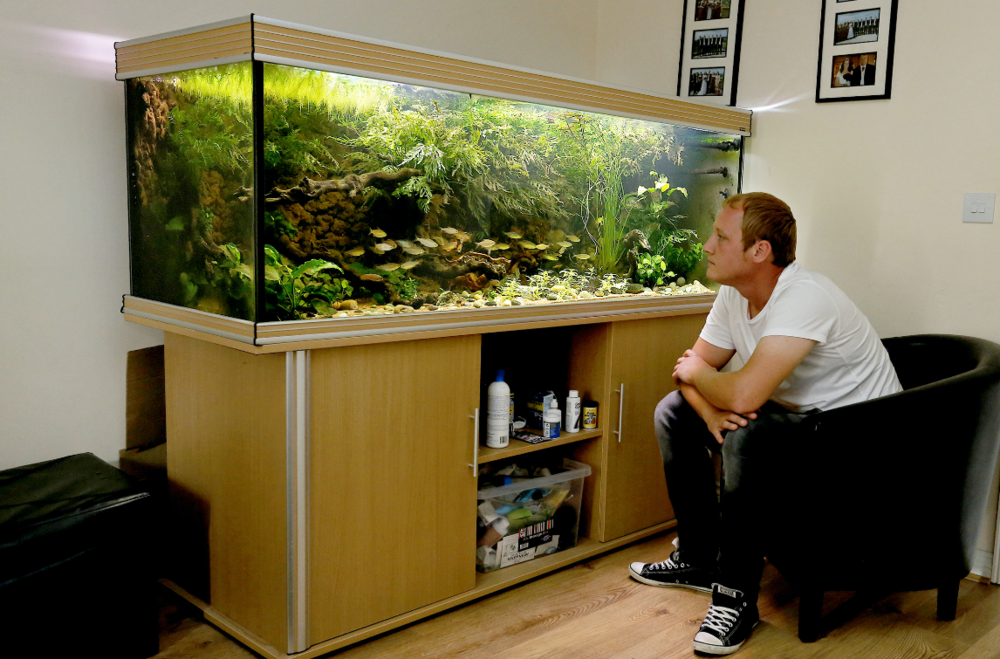 Name: Adam Walding.
Age: 27.
Years keeping fish: Five.
Favourite fish: Probably my Alestopetersius brichardi.
Most paid for a fish: The Alestopetersius, at £20 each.
Dream tank: If I had to choose one it’d be a lot like this but bigger and with more Alestiid species.

Adam Walding is an aquarist who has brought a chunk of deepest Africa into his home in Northants. A self confessed fan of the old continent, he’s put together a beast of a tank that goes beyond being just a big volume with big fish. Instead, he’s created a shoal-laden, natural-feeling layout with canopies and undergrowth. This is the forested side of Africa we see all too infrequently in UK circles.

Adam came to my attention after I mislabelled a fish in an earlier magazine. It turns out that while I was scrabbling around photo archives the world over, he had much of what I needed, all sat within an hour’s drive from my office. After I’d been suitably chastised, I asked if he’d be keen on letting me take a closer look at his project.

Flash forward a few weeks, and I’m stood in front of a 180cm/6ft window that takes me directly to the Congo. Adam’s Aqua One Aquience Classic 1800R, at 180 x 60 x 66cm, and holding 600 l/132 gal of water, is not the token small set-up I’d envisaged. Sagging under the weight of a wall of Bolbitis, and with region-correct fish streaking in and out of every crevice, I’m pleasantly surprised to see the alternative African scene is very alive, albeit on a small scale, in the British hobby. 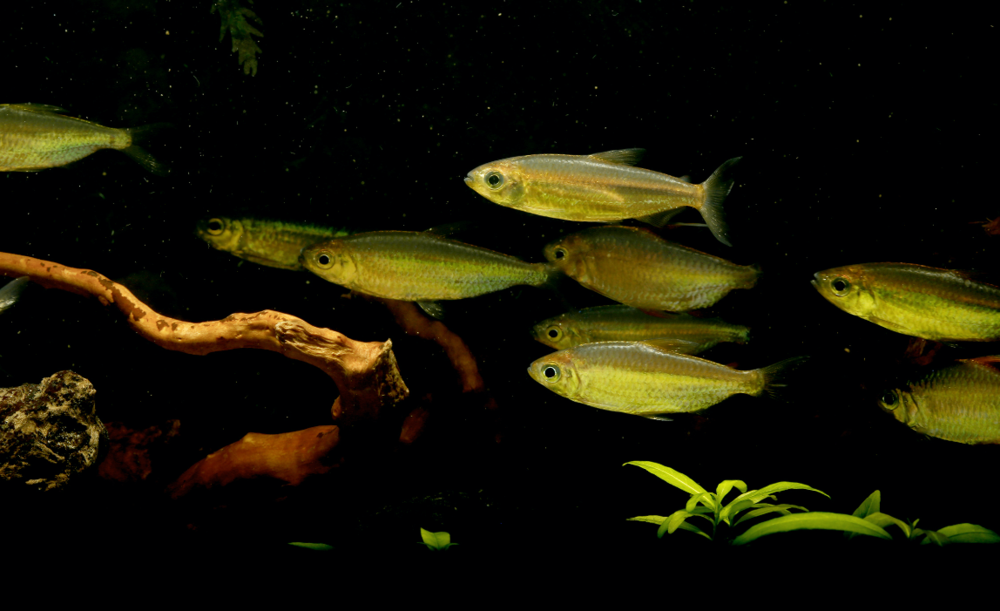 Adam is a huge fan of Alestopetersius.

PFK: Adam, for you, what’s the appeal of an African tank?
AW: I wanted to do something different, something a little esoteric. I’d noticed a deficit of African fish in the trade, particularly tetras, and my interest grew from there. I can remember seeing in the tetra sections of fishkeeping books that the Congo tetra was the “exception”, and it got me thinking that it couldn’t have been the only one of its kind from Africa.

PFK: How long has this set-up been running for? And what did you have before this?
AW: This set-up has been running since October 25, 2013. Before that I had a Rio 125 with west African fish, a 15 l/3.3 gal shrimp tank and a Fluval Edge I’d converted to a marine tank, with a clip-on twin T5 light.

PFK: What hardware does it have running on it? What filter media are you using?
AW: Hardware is just the standard for the Aquience, with eight T5 tubes producing a total of 260W of power (rather than four long tubes for whatever reasons), two Aquis 1250R external canister filters and 450W power of heating. I use 50/50 pink and white tubes. It’s not likely to be enough for demanding plants,  I did once try Eleocharis parvula but that slowly died.

PFK: What maintenance does the tank need, and how often?
AW: I wring out or change filter floss once a week, clean the rest of the media every couple of months, staggering each filter a week apart so that any bacterial losses are minimised. After decor, the tank holds something closer to 500 l/111 gal so I change 125 l a week, normally 25 l or 50 l every day or other day. I find I can remove more detritus this way. 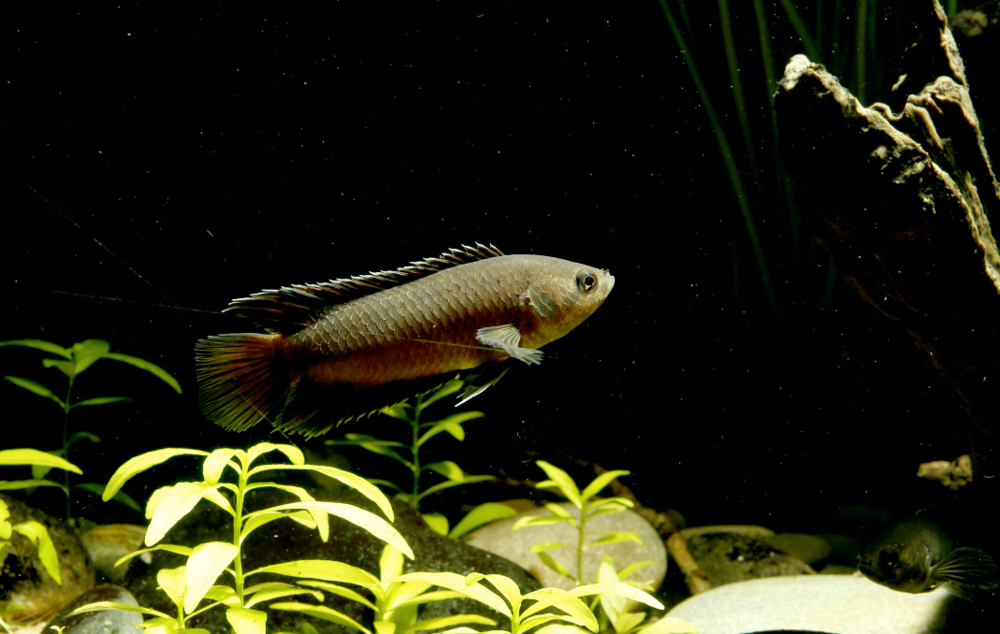 PFK: What spawning successes have you had so far?
AW: Something did spawn in the aquarium a couple of nights ago, the eggs were minuscule and quickly eaten. I think it may have been the Alestopetersius nigropterus, as there was no sign of a bubble nest.

In terms of deliberate spawning, I have bred a pair of my Microctenopoma ansorgii in a separate 40 l tank that sits neatly in the cupboard of the main aquarium.

PFK: What care did you need to give breeding fish? Did you condition them, or move them or anything?
AW: When I wanted to breed the Microctenopoma I couldn’t find a lot of information online, but I did know it would be similar to Betta in that the male would build a bubble nest and that soft water was required. I introduced the largest female to the tank first, and conditioned her with a lot of frozen food for a week before adding the male, whom she promptly attacked.

Given that he was about three times the size of her, that quickly subsided and I noticed a small bubble nest three days later, and then a larger one with eggs in it five days later. I removed the female immediately and then I removed the male when the eggs started
to hatch.

All of this took place in heavily stained acidic water — next time I will try it in slightly harder water.

PFK: You say that pH is around the mid-six mark, with a KH of 2. How do you keep the water like this? Are you using RO for it?
AW: Yes I am, and I use JBL’s Aquadur to remineralise it before changing some. 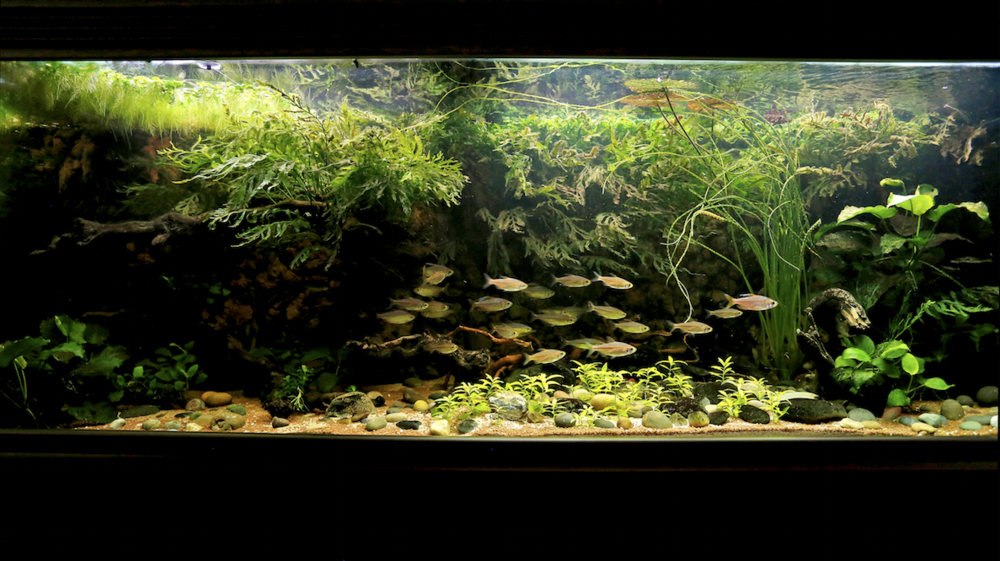 PFK: Are your fish all biotope specific? Do they originate from the same region, or is there a bit of creative license involved?
AW: I like to be accurate where possible, but some of these fish only have a small geographical range compared to others. It’s easy with the Xenomystus nigri knifefish and Pantodon buchholzi butterflies because their natural range is huge, but it’s much smaller with the Garra congoensis and Alestopeterius nigropterus. Those two I could perhaps be taking some license with, but my A. nigropterus came from Lukeni river, when according to IUCN they are only found in Lac Mai N’dombe. They may not even be nigropterus!

PFK: You made your own backing for this tank. What did you use to do that? How did it come together, and did it take long?
AW: I made that with two-foot squares of egg crate and expanding foam originally intended for pond use. I added some rocks and wood to it before it all set, and then when it had set I applied a couple of coats of Gorilla Glue and paving sand. It took about a week, as I only had room to make one square at a time before fixing it in the aquarium and starting the next.

PFK: What substrate have you used?
AW: It’s the same paving sand I used for the background, thoroughly washed first, although it wasn’t too dusty. Lafarge was the brand. 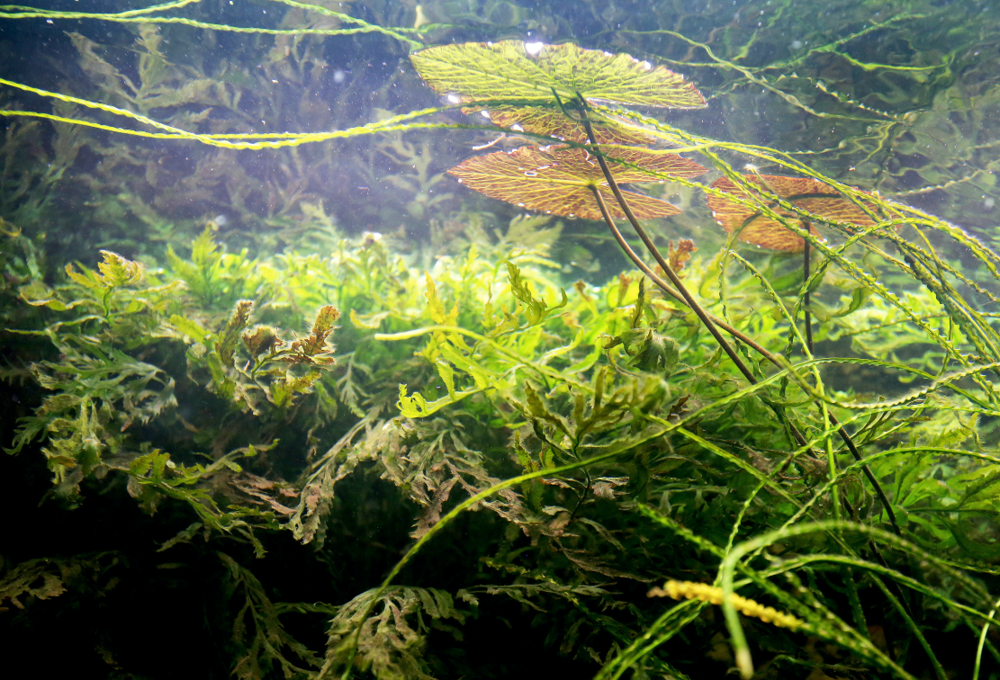 PFK: What plant species have you used? How have some of these been fastened on to the decor?
AW: I have various Anubias, I think all are varieties of A. barteri. There’s a lot of Bolbitis in there, some Nymphaea, a Crinum calamistratum and some Hygrophila polysperma — there’s that creative license!

Some of the Anubias were tied down where necessary but I just wedged the Bolbitis in crevices on the background, given there was nothing to really tie it to. That was nearly two years ago and the background is now almost completely hidden.

PFK: What interplay between the fish species have you seen? Are any of them ever hostile towards each other?
AW: The different species ignore each other, but the tetras are happy to shoal together. Sometimes there is some aggression from the knifefish toward the tetras but it’s far from the constant chasing and torn fins that we fishkeepers dread. I think it might be the shininess of the tetras that annoys it when half the lights are off — it never does it when both lights are either fully on or off, so I minimise that time.

PFK: What foods are you using, and how often? Do you have a set routine? What’s the trickiest fish to feed, and why?
AW: I use Tetra Pro colour and Pro algae, and generic bloodworm and brine shrimp, normally flakes in the afternoon or early evening, and frozen food later in the evening. It depends
when I get home from work. When the tetras were smaller I used Hikari micro pellets (and still do for young Microctenopoma) but the larger they got the less interest they showed in them.

Some of the tetras are the fussiest fish, especially the newest ones. The Garra are definitely the greediest, even taking food from the surface. I give the knifefish half a prawn once or twice a week, being careful to drop it right in front of him before one of the Garra grabs it. 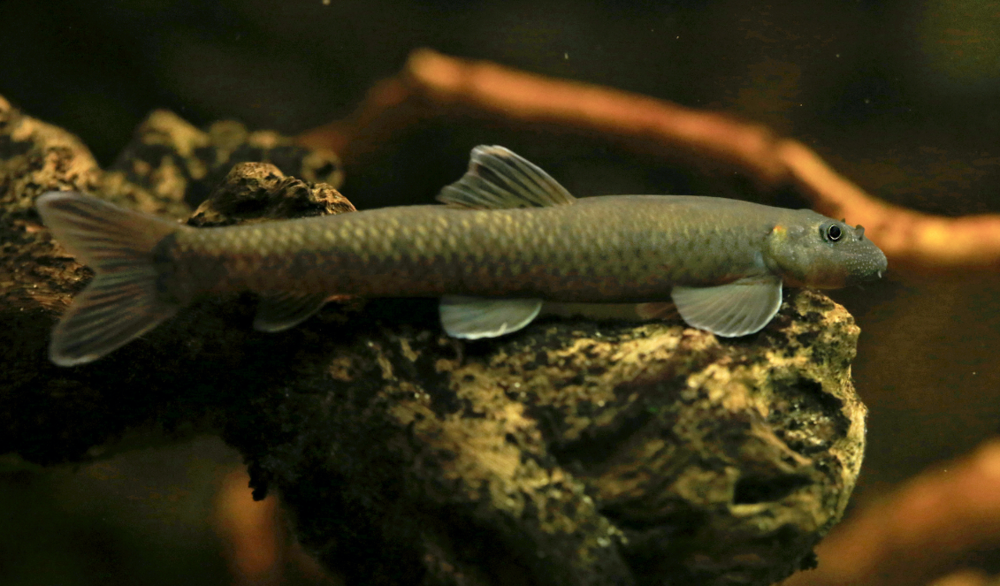 PFK: What has been the fastest growing of the fish you’ve added?
AW: The Garra I think, which figures given the way they eat.

PFK: What’s been the biggest surprise you’ve had in setting up this tank?
AW: The Microctenopoma have not been anything like as shy as I was led to believe, even swimming up to a net and pecking it at.

PFK: Are there any fish you want to add but can’t source?
AW: Another Alestiid has caught my eye — Brachypetersius gabonensis. I’d also like to
keep more fish from the Alestopetersius genus and to learn if my A. nigropterus really are what they claim to be.

PFK: Are there any fish you regret adding?
AW: I’ve six Synodontis nigriventris which stay completely hidden apart from feeding time, but they do make sure that any food that lands on the substrate isn’t wasted. 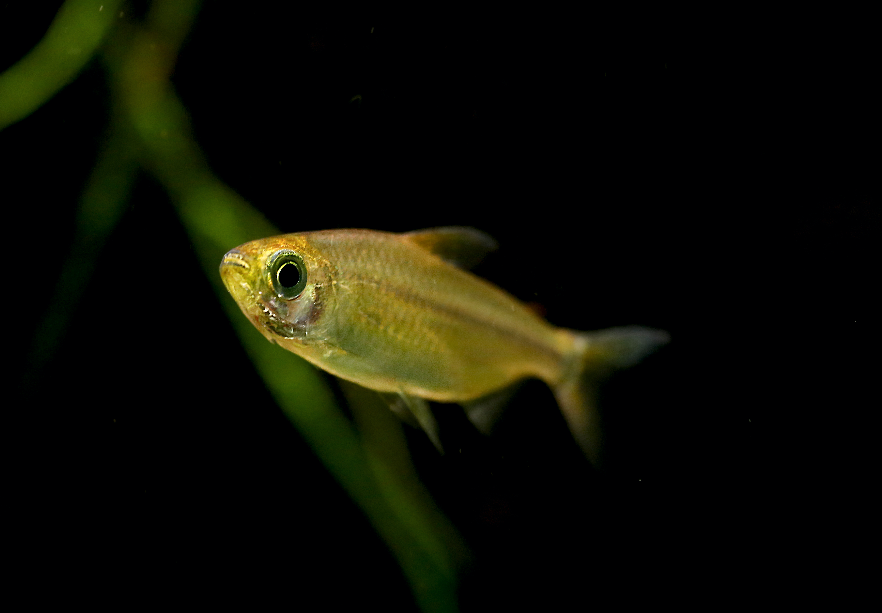 PFK: What should the new fishkeeper be aware of when setting up an African
riverine tank?
AW: I think a good grasp of the nitrogen cycle and some mature media would be a good idea. Touch wood I’ve had no pollution spikes in the tank since it was set up, but these wild
caught fish are very delicate; I’ve had a few die in transport on a journey that was less than an hour. Quarantine is a good idea too, a cheap source of RO water and a willingness to travel if you want rare species. Facebook groups can be good for “I’ve seen such and such here”.

PFK: If you could start again and change anything, what would it be?
AW: I initially had an area of JBL’s Manado substrate for growing the Hygrophila, before realising it’d grow anywhere. There are Malaysian trumpet snails in the tank and for some reason I thought it’d stay put. It didn’t, and despite my efforts there is still some in there, sitting atop the sand mocking me.

Adam's set-up at a glance