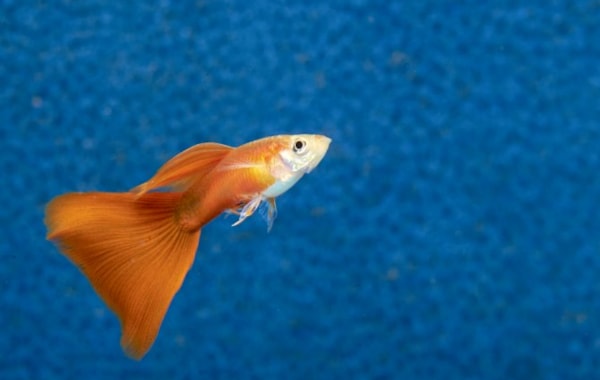 If you want show grade guppies, passion and devotion trump a deep wallet. We visit a reader at the top of his game.

Derrick’s pristine fish house, with its banks of spotless, sand-free uniform aquaria, is alive with flowing delta tails. His show-calibre guppies are perfectly refined and his layout, efficient and economical.

That’s the wonderful thing about Derrick’s fish: they’re not the domain of the rich and exclusive, as other aquatic niches can be. Instead, the hardcore guppy scene relies, at its very core, on a confederacy of enthusiasts. These are folks who nurture their fish, refining bloodlines over generations to create something impeccable. "The closest thing to it is rose growing," Derrick says. "It’s all about improving your strains."

In this game, patience is king, and only the testy aquarist is disadvantaged. 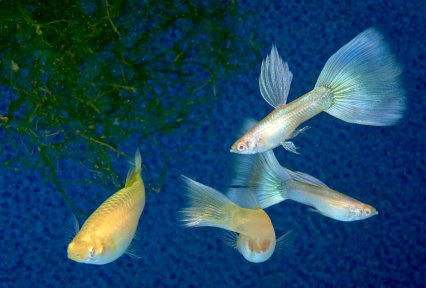 Derrick is one of the founding members of Fancy Guppies UK, and his club membership and interaction is integral to his fishy success. As well as being surrounded by keepers of equally respectable guppies, the thrill and demands of putting his fish to the scrutiny of show judges is enough to ensure Derrick keeps his standards peaked at all times.

The club is as obsessed with showing guppies as it is with honing them, and pragmatism comes second only to ambition. Here, there are fishkeepers who travel far in pursuit of their passion. Derrick has been as far afield as Germany and Italy to show his own, though other members have stretched their legs further and flashed their fish all over the globe.

Some aquarists are on the fence about the club scene, but as Derrick points out, it’s high time that any old misconceptions are torn down.

Anyone can join a club like Fancy Guppies, and all are cordially invited. There’s no entry test or prior aptitude required, and you’re not expected to be a breeder, expert or otherwise. Whether you’ve just picked up your first fish, or if you’re a leading conservationist and breeding pioneer, within a club setting all are equal. You needn’t be nervous about joining if you’re young either.

There’s no ageism involved in the fish club scene; frequently, the most fervent aquarists are the youngest there.

Acquiring quality fish motivates some in the club world, and there’s no shame in that. Who wouldn’t want the best fish they could access, after all?

There’s a distinct difference between show calibre and store calibre guppies, and most clubbers keep the two worlds separate. "I’d never mix the two," Derrick says, "because they each carry pathogens that affect the other."

This obvious point is often overlooked, but it follows that fish bred for generation after generation on farms will be exposed to different pathogens to those in a home breeder’s set-up.

Worse still, some farms use treatments that build the immunities of some diseases, creating a stew of potential different ailments. This all mounts up to make treatment difficult and wipe outs rapid when they occur.

It also follows that a home breeder, with a small amount of stock and heaps of time to lavish on individuals, will have a pristine output. With invested effort comes quality, but to get the good stuff, you really need to be 'in' the scene. 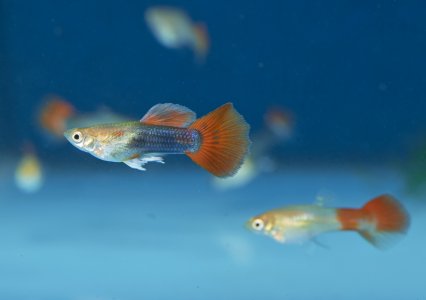 Guppy keeping has a cosmopolitan side about it, and Derrick tells of fish coming in from all around the world. The club stock has its origins in America, Taiwan, Germany, Belgium, France, Malaysia and Italy, and meets can be as much about trading these diverse fish as showing them. Members will swap or sell fish between themselves. A clutch of fry, if birthed during a show, are rounded up and sold off at around £5 a bag. For a pic ‘n’ mix selection of what could be the sires of future prizewinners, that’s not so shabby.

"You don’t need to show fish if you’re at a show day," Derrick says when I allude to just rocking up to one of his events.

"If you wanted to enter a fish into a little show, you’d want to email in advance, but even then you can just turn up on the day as a visitor."

It’s true; anyone can show fish, with the one caveat that you’ve bred it yourself. What isn’t done is the underhand tactic of just buying a fish and bringing it along to be graded. In such a situation, the aquarist is only cheating him or herself and gaining nothing. The reward is in getting recognition for a fish you’ve bred for yourself and raised from fry. And, scanning your way through the fruits of Derrick’s own labours, you can see why he’s so proud of what he does. 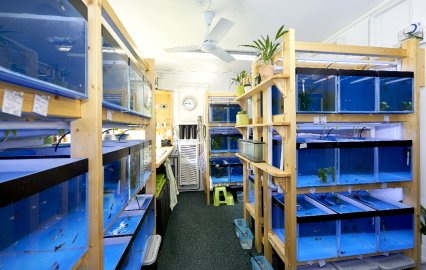 "I wrote it all down," Derrick says, "because I was tired of doing the calculations every time I wanted to treat." He hands me his comprehensive fish house records. Not only has he listed everything running in the fish house, but he also has copies of the breeding records, as well as the labels he uses on individual tanks.

The fish house is not only smart, but the layout is staggeringly simple. The filtration is more technologically primitive than the most basic canister, yet way more efficient.

Derrick has 57 tanks in his fish house, made up from a mix of 30 60 x 30 x 30cm/24 x 12 x 12in and 27 45 x 30 x 30cm/18 x 12 x 12in. He’s gone so far as to calculate the internal 'fill' capacity of them, taking into account the fact that the water doesn’t reach all the way to the tops of his aquaria. To save space, each is arranged 'end on' with his home constructed wooden racks, and each has a uniform background colour courtesy of blue self-adhesive vinyl. 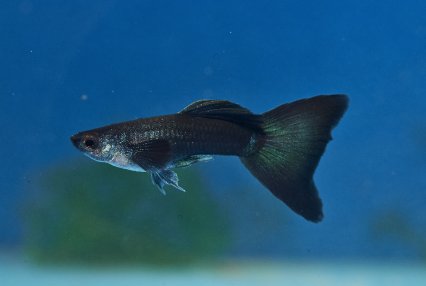 If that number of tanks sounds like a lot of water changing to you, then you’re both right and wrong. Each tank gets a 10% change daily, but the process is almost entirely automated and doesn’t involve as much as holding a hose. Derrick’s water change system involves a 450 l/100 gal storage canister supplied by tapwater passed through an HMA filter.

When filled, all he needs to do is turn on a timer switch, and that fires up a Hailea HX8890 pump, which feeds the racks of aquaria through fitted rigid piping. As the tanks fill, the water overflows through drilled outlets behind the filter in each tank, washing away to waste drainage that runs under the fish room. To find the drains under the fish house, Derrick drafted in a plumber who used a pair of water divination rods to find the location and direction of the flow.

You can chuckle, but it worked, and saved him a lot of hassle tearing up the floor.

Once a week, Derrick gets in each tank with a syphon as well, but given that each has a bare base, this isn’t an arduous task.

Filtration comes in the form of home-made Hamburg filters. These simple devices involve inserting a wide slab of foam into the back of each tank and running an air uplift behind and over the top of it, almost in the style of the undergravel filters of old. The uplift pulls a weak flow of water across the whole surface of the foam, leading to massive mechanical and biological activity. In some tanks, the Hamburgs also conceal hidden K1 filters made from bottles, media and an airline, to boost the tanks’ already large biological action.

Derrick makes his own uplifts using conduit, some conduit coupling and a couple of sealing rings. He chooses conduit plastic, as it’s easy to bend, as opposed to rigid piping that needs joints and elbows.

The room is kept at a constant temperature with a fan convector that sits at one end of the room, rather than having heaters in individual tanks and using an inexpensive greenhouse thermometer, Derrick can monitor what it’s up to. The heater taps into the household combi boiler, making it more cost effective than using a standalone heater.

Despite being a closed room of tropical tanks, there’s no condensation or signs of rot anywhere, in no small part due to the moisture-sucking workhorse that is Derrick’s B and Q dehumidifier. Combined with the anti mould paint and stain used throughout the room’s construction, feisty young fungal spores stand little chance of getting any hyphae down.

The tidy lighting came as the result of a little research, eventually being secured from a supplier in Hong Kong, trading as 724 Light. Each of the six banks has a timed supply, arranged to come on at staggered intervals. This way, Derrick avoids shocks to his stock that would occur if the room went from pitch black to supernova bright.

Something all aquarists should strive to copy is the net soak and rinse system. Each rack of tanks is furnished at its toes with two small tubs: one with a water and chloramine mix, the other just with fresh water. Derrick uses the chloramine as a disinfectant to stop potential cross contamination between tanks in a rack, but he is quick to observe that the nets, when kept this way, do need a rinse before they can be used. 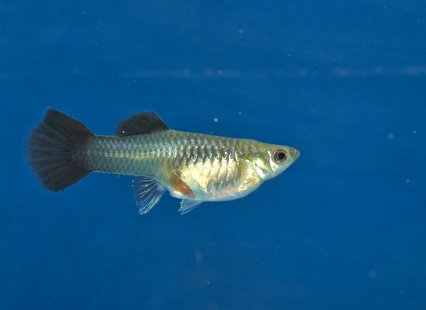 Breeding out the bad

Though Derrick uses a breeding trap made from coarse mesh to separate females when birthing young, some breeders try to remove the cannibalistic bloodline from their stock. By monitoring their fish as they give birth, they can select to breed from those who show indifference to their offspring.

By keeping and breeding from these, instead of from those females that indulge a little culinary infanticide, breeders hope to pass on the 'non fry-eating' genes to future generations. 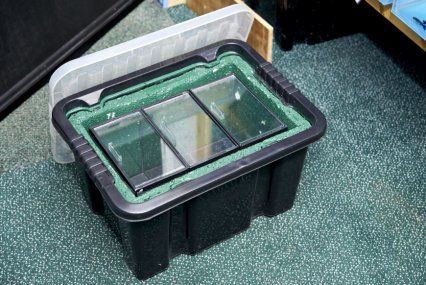 Taking fish to a show

To show a guppy seriously, one thing you’ll need is a specially made tank of specific dimensions.

Almost all those in the UK are provided by one man in the Midlands called Brian Chittenden, and the tanks are frequently on sale at club meets and events.

When taking a fish to a show, you’ll need to bring your own water, and it’s worth investing in a specially constructed polybox to keep the fish up to temperature during transit.

Derrick’s own insulated transporter is constructed from a plastic box into which polystyrene was positioned to shroud the tanks, before the space behind it was filled with expanding foam. For his efforts, he now has a snug carry case, which will fit three show tanks at once.

Something that Derrick keeps hold of is a collection of old Ferrero Rocher tubs, which get up-cycled into containers that are just the right size for moving and acclimating any fish between tanks. 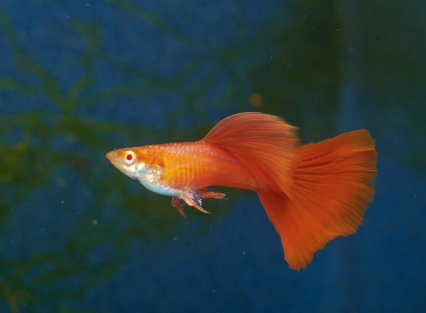 Habitat: Everything from streams to lakes, puddles to ponds, rivers to estuaries. If it’s wet, a guppy will live in it.

Temperament: Entirely peaceful, but always looking to breed. Can harass other species with its amorous attentions.

Ease of keeping: The easiest tropical fish in existence.

Special notes: Never house with known fin nippers that can attack the fins. Keep more females than males in mixed sex tanks to avoid excess harassment. Find a source and stick to it to avoid disease woes. 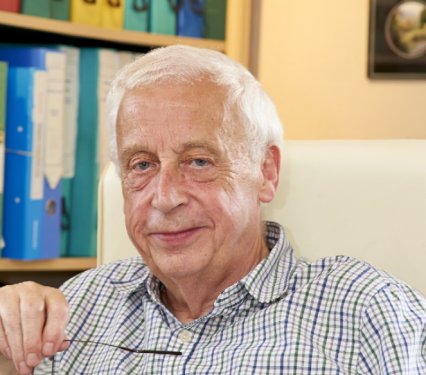 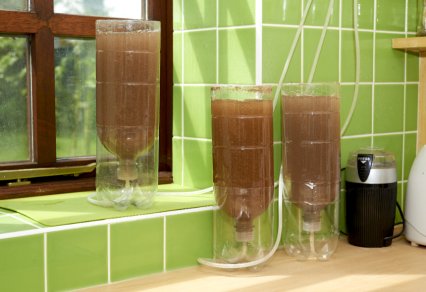 4. The secret part to facilitate Derrick’s Artemia hatcheries: a simple screw on cap with a 6mm fitting from eBay.

Keeping guppies is a doddle, and if you’re reading PFK, the chances are you’ve already dabbled in them. A basic guppy breeding set-up could consist of:

Want to know more about getting stuck into the guppy scene? Visit Fancy Guppies UK to find more information. Membership costs £10 annually, and can be purchased online.