The hugely popular Fluval FX6 — famous for its powerful flow rates and filtration capabilities — now has a baby brother. But does this scaled down version live up to the family name? Nathan Hill reckons so...

Hagen, the company that owns the Fluval brand, managed to hit every right note when it tuned up its FX range. The old FX5 model brought affordable filtration to heaps of giant tanks across the UK, and became something of a tankbuster staple.

The FX6 — it’s lower  consumption, jet black replacement — has become synonymous with big flow and prominent filtration. I’ve yet to hear any serious complaint against it. It’s a versatile beast, supposedly coping with tanks up to 1500 l/333 gal capacity (though a 1500 l, heavily-stocked tankbuster set-up might be a push).

That means that there has traditionally been a big void in what can be filtered with Fluval externals. The flagship canisters, the ’06 range, only go as far as the Fluval 406, rated for tanks up to 400 l/88 gal capacity. If you’re in the 700–900 l/155–200 gal tank range, you’re stuck between the choice of multiple canisters, or something oversized. 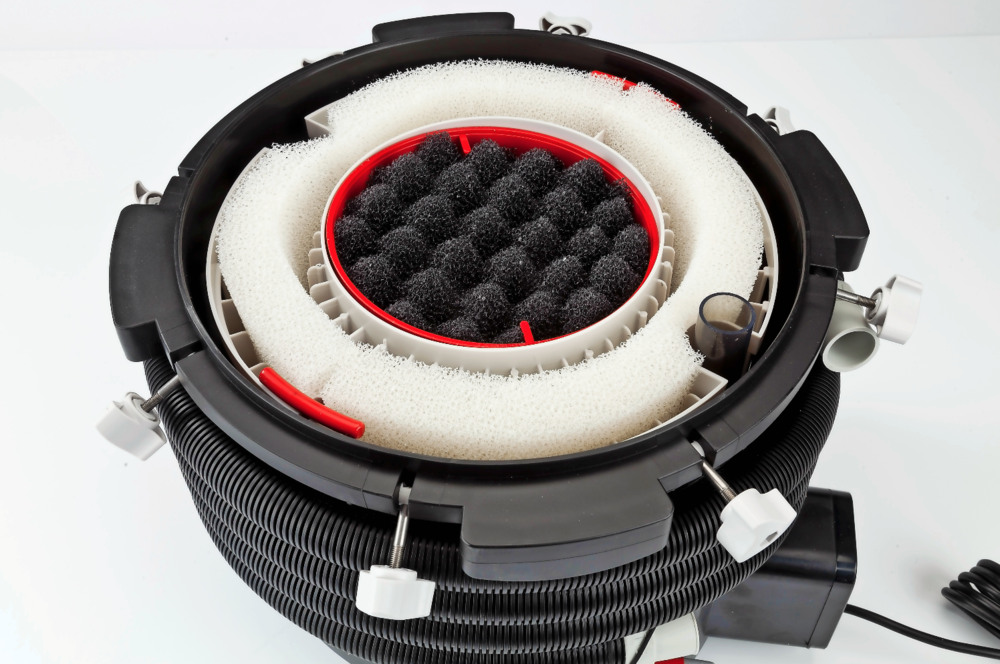 The major difference between this model and the FX6 is its physical size and media capacity. Things are understandably a bit tighter in here, but there’s still a generous 14 l of filter volume, with 3.9 l of that dedicated to biomedia. There’s also 1,400cm2 surface area of mechanical foams curled up inside.

Getting inside is easy, but you do need to remember to turn the flow taps off before dismantling the unit. Some of us are too comfy with self-sealing connections, but the FX4 doesn’t carry them. It takes seconds to unfasten the eight screw clamps, and the whole lid comes away. Before scrabbling about with the media, locate the two handles (they’re red) on either side of the media crates and lift out everything in one go — it makes life so much easier. If you’re putting the filter together, take care to remove the biomedia from the plastic packaging first. I’d also suggest buying a little more — the FX4 comes with two biomedia pouches, but I’d have three or four, personally.

The FX4 contains the same SmartPump technology of the FX6, measuring output and ramping flows up or down accordingly. That also means you get the helpful (but unnerving if you’ve never met it before) stop/start feature where the pump turns off for two minutes every 12 hours to let air escape. If you’re not familiar with the technology, it might catch you off guard when you first prime the filter — when you turn the canister on, it’ll run for one minute then shut down to let air back out. The user who hasn’t read the instructions could mistake this for a fault and end up with egg on their face in taking a perfectly functioning filter back to their local store.

Remember those dials on the early FX6 that didn’t really serve a purpose unless you manually moved them? They’ve gone. In their place there’s now a hoseclip, which is real handy for the new FX gravel vac (see the review on this).

Water changes with an FX4 are dreamy. Buy up some extra hose to go on that outlet at the bottom of the canister, and you’re ready to go. Lead the outlet hose into a bucket (or down a drain if you have enough of it), open the valve, close the return valve from the top of the filter back to the tank, and away you go. When finished, simply switch the drain tap off, open the return valve again, and you’re all done — aside filling the tank back up again, of course.

All hosing and fittings (aside a drain hose) are included. The stop valves are gloriously chunky, like a plastic Yorkie bar, and the inlet strainer unashamedly prominent. Yeah, use it with tiny fish and you’ll likely lose the lot, but that’s not really what the FX4 is aimed at.

Getting to the pump is a bit trickier, but only because you need a screwdriver to extract it. Three crosshead screws hold the thing in place, and you need to be careful not to drop the sealing ring as it comes away (or pinch it when replacing). I don’t need to remind you
that you need to empty the canister before attempting this, do I?

Well done, Hagen. We wanted this filter, and you delivered it. It’s not exactly going for pennies, but it’s well worth it for what you get. I bet it’ll last donkeys years, as well.