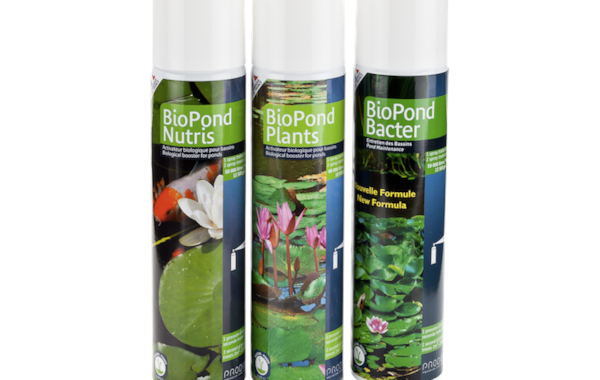 Trust me when I say my face when I first saw these cans was exactly like yours when you read that headline just now, writes Nathan Hill. Aerosol pond treatments. That’s not a typo.

But for the initial craziness, there is a big plus point to containing pond (well, any) treatments this way. Think about it — what is the single greatest spoiler of additives and biosupplements that you add to a tank? If you just thought ‘oxidation’ then you’re correct. Whenever you buy a bottle of anything, you immediately impact on the lifespan of it when you unscrew the top. Oxygen gets in, the contents oxidise, and a few months later, you’re left with expired products.

The Prodibio aerosols go one way. That is to say they are cans of supplements and pressurised nitrogen, and even when you’ve used a liberal amount, there’s no more oxygen in the can than when you started. For product longevity, that’s not too shabby an idea.

There’s also a claim that aerosols are easier to use, and to an extent I’m inclined to agree. Instead of having to pour out liquids into measuring cups, or count drops and pipette stuff about, you simply spray, and the length of time you spray is relative to the amount of water you’re treating. In the case of the Prodibio treatments, it equates to one second of spraying for every cubic metre (1000 l) of water.

There’s also a reasonable point about increased immediate dilution. It has been a while since I added a medication to a pond, only to see a fish swim right up into the dense cloud of it, leaving me wondering what health problems might come on the back of gulping up a big
dose. But the memory still sits badly. In spraying on to the surface, I avoid the big and potentially dangerous ‘glug’ of chemicals slowly diffusing.

In the range there are three products. BioPond Bacter, BioPond Plants, and BioPond Nutris — two are obvious, the last one less so.

BioPond Plants is a weekly supplement for plant growth, presumably micronutrients, and definitely iron — getting the complete make up is tricky. It is at least nitrate and phosphate free, on the assumption that there’ll be plenty of these chemicals in the pond already. I can’t really argue with that. The 200ml can treats up to 40,000 l.

BioPond Bacter is also a weekly supplement, and I will have to presume it to be heterotrophic bacteria in the can — those bacteria that gobble up solid wastes and assist in decomposition, rather than the ammonia and nitrite oxidisers that live in the filter. Amongst the things it claims to reduce are green water, odour, and sludge formation as well as (by extension) reducing fish disease incidence. Many supplements of the heterotroph nature are now well understood, and I’m seeing outstanding results elsewhere, so there’s good reason to be optimistic.

BioPond Nutris is something that Prodibio excels at — boosting extant biological filtering. They’ve products for freshwater and marine tanks of exactly this kind, which have a robust reputation for doing what they claim, and if the formula has just been tinkered for aerosol form, I see no issue with it. Dosed weekly, a can will treat up to 50,000 l of pond water, and the spray contains a medley of vitamins, amino acids, enzymes and trace elements that act as nothing more than a catalyst to faster biofiltering. So there it is. Bacteria booster.

The only downsides I can foresee are the requirements to spray evenly over the pond surface — easy to do with a small pond, or if you have arms like a Boxing shrimp with a large one — and the inability to gauge how much is left in the can. I suspect some pondkeepers may baulk a little at the price, too, but given how much each can treats, it’s not extortionate.