I’ve seen a few of these while out and about now, and despite initially wanting to write them off as 'just' another nano tank, I’ll concede that the NEWA designs have mileage.

NEWA is an Italian company, which explains the slight emphasis on looks over a classic box-and-hood aquarium.

The NEWA model I have to play with is the NMO 50, which is actually just shy of 50 l/11 gal capacity (45 l/10 gal when filled), with dimensions of 35 x 36 x 35cm/14 x 14.2 x 14in. As tabletop aquaria go, it’s in that nice 'big enough for tiny fish, while small enough to not impose itself' place. As a fascinating aside, when I set the thing up in the studio for photos, it had a huge amount of interest from people passing by, asking if they might be able to have it when I was finished.

The '50' model only comes in fresh, though smaller designs have a marine option, which also incorporates a protein skimmer. 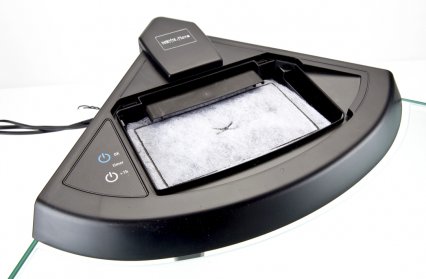 For the basic freshwater models, the filter involves an up-and-over trickle design incorporated into the curved hood. A coarse(ish) biological foam goes in, followed by a fine mesh/carbon pouch insert. The pump sits in the underside of the lid, with a pipe and strainer jutting down into the water, and sends the water at 300 lph through a concealed route up to the filter chamber, where it percolates through the media and drips back down into the aquarium. It’s a basic design, and you might want a couple of bendy brushes on standby for the occasional clean, but otherwise it’s well thought out. There’s even an emergency overflow facility for if the filter starts to clog.

An adjustable heaterstat is included (100W) which has a dedicated insert/holder in the lid. Slip it through (there’s a little bit of fiddle with cables and plugs during this stage) and you’re good to go. Both heater and pump strainer are relegated to the far corner of the tank, making them simple to conceal with well placed decor, while an included trim to conceal cables on the outside of the tank completes the smart appearance. 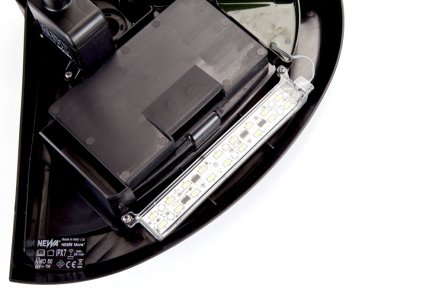 Lighting is surprisingly punchy, delivered by a string of 18 white and six blue LEDs that follow the frontal curve of the semi-lid, and I imagine that many plants could do well underneath them.

There’s also a superbly cut cover glass that follows the shape of the lid.

I was tempted to keep this for tiny Boraras, but I relented and gave it to a colleague.

Now I’m actually thinking about buying one, so hopefully that says something about how impressed I was. For bonus points, the packaging doesn’t have goldfish on it, which is very refreshing.