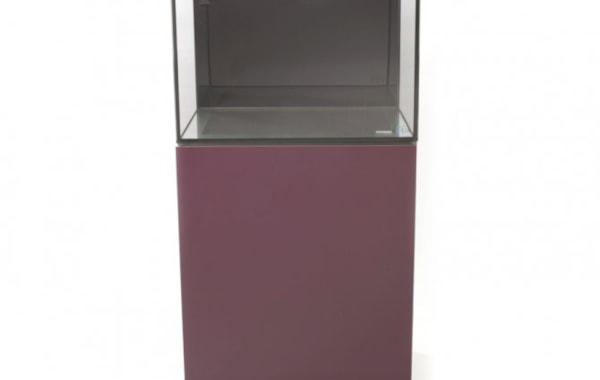 When former PFK editor Jeremy Gay left the flock to join Evolution Aqua to help develop brands, I had a feeling he’d take what he’d picked up from his years of experience and put it into something fresh. I’m inclined to say that the long days we spent chatting about our 'ideal aquaria' have finally borne some fruit, in the form of the Evolution Aqua aquarium series. 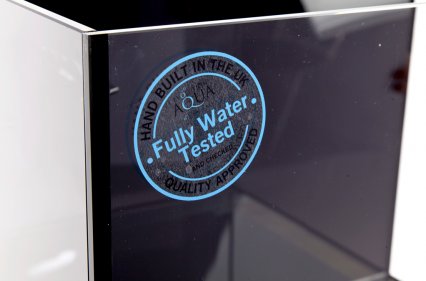 The first thing that strikes me about the package is that it is sturdy, and comes without faff. EA doesn’t send out flat-packed cabinets, and what you get is constructed, sturdy and comes with something that always cheers me: adjustable feet, so you can avoid that annoying 'surface slant' of water that I loathe on fixed cabinet designs. At 80cm/32in tall, it’s a nice, grand size that allows you to look up and into it if seated.

Next up, there’s the glass. At 8mm thick on the eaMarine 600 model, it feels initially daunting and clunky, but that soon gives way to reassurance when you feel how solid the thing is. Turn it around and have a look at the sump/weir system behind, and the same sturdy approach holds true.

The baffles go the whole way down, creating a filter where water goes where it’s supposed to, instead of taking an easy route underneath, or over the top of obstacles.

Cerium oxide has been used to polish the tank, and combined with the low iron content, you’d be hard pushed to find anything clearer. The finish is, quite simply, superb, and the tank was delivered spotless and free of any silicone streaks or fingerprints. Buyers get a choice of clear or black silicone.

The tank has a 'floating' base, by which I mean the supporting base mat is set back from the front and sides, creating the illusion that the tank is floating.

With dimensions of 60 x 50 x 45cm (high)/24 x 20 x 18in, it has a volume of 135 l/30 gal, though some of that is given over to the filtration that runs the length of the back. The sides of the filter are concealed by coloured cladding to match the cabinet, so it blends in nicely with the base. 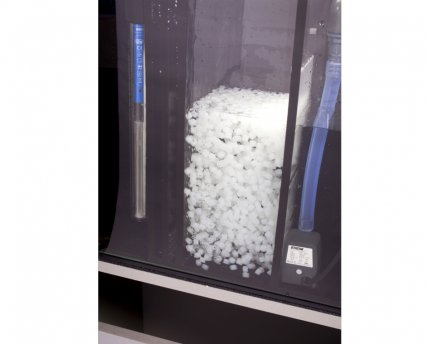 The filtration is pretty inspired, and comes on the back of EA’s ongoing development of K1 media — in this case K1 micro.

In a nutshell, water exits the tank through a weir (a top scavenging weir, no less) which is wide enough not to block at the first hint of algae, and narrow enough to exclude fish. At full pelt, the weir draws a lot of water, which is worth noting if you’re planning on keeping slow moving beasts. If it does manage to get clogged, there are emergency overflows for the water to still pour through, though these will affect performance. 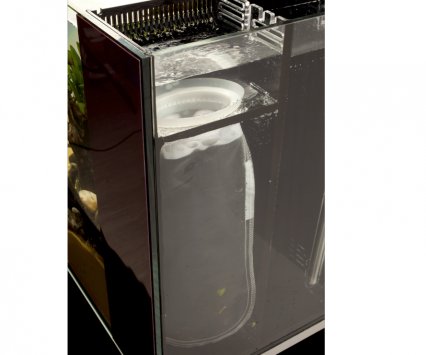 Water then passes through a 200-micron sock filter, which takes a percentage of all passing water while allowing surplus flow free reign to travel through a separate channel. The sock is intended solely as mechanical filtration, and needs regular thorough cleaning. Having worked with these socks many times, I can vouch that you really don’t want to leave them too long between cleans. That said, when I have traditionally left them alone in marine systems, they fast become breeding lairs for copepods and crustaceans.

In the first chamber is space for a heater, which isn’t supplied. I can only imagine that with so many readily available on the market, EA has deliberately left one out to keep cost down.

Next up comes a cascading chamber containing one litre of K1 micro media. This then tumbles away with its massive surface area, and though we don’t know all of the microbial interactions that take place inside that stuff, we do know it fast becomes a cornucopia of bacteria and beneficial protozoans and even rotifers that all help to keep pollutants down. It’s vital to adhere to the set amount of K1 — adding more will reduce the tumbling activity, reducing efficiency.

The great thing with K1 is that as it’s always tumbling, it sloughs off any excess biofilm as it arises, releasing it as a nutritious food source for filter feeding inverts. A package of 20 PURE reef balance balls helps to kickstart things nicely.

This means that skimmers are superfluous in eaMarine tanks. Skimmers will trap out that biofilm waste, but actually benefit the tank very little. On balance, they may even be a drawback as they compete with the colonies on the K1 for resources.

As the water reaches the last chambers, it is thrust back into the tank via two Eheim Compact pumps — a 600 lph and a 1000 lph model. The flow these punch into the tank is notable, and easily targeted. The two flow rates give great versatility in keeping different corals happy, and a good six-monthly strip down and clean of the pumps will suffice in most tanks.

The package comes with two Kessil A160WE Tuna Blue LED lights at 40W each. We’ve reviewed these before, so I needn’t remind you how great they are. Combined with the goosenecks to fit them, they are unobtrusive and smart. My single gripe would be that if you want to run one light solo, it needs to be off-centre, as there’s a filter baffle right in the middle of the back. You even get the Kessil spectral controller, so you can program your lights to come on and ramp up or down automatically.

With a choice of tank and trim in white, black, plum, blue, black, champagne, jacaranda and Japanese pear, if you still can’t find something that will work in your home, then it’s your home that’s at fault.

One point worth making is that the rate of evaporation is higher than owners of closed-top tanks will expect, as is the way with open devices. In EA’s defence, the typical marine keeper, at whom this tank is aimed, will be checking the chemistry and water level daily, topping up as required.

If you’re in the market for your first marine set up, the price tag might put you off. But if you can stretch to it, you’ll get a better long-term tank than many of the cheaper alternatives.

Would I buy one? If I was looking for a decent marine tank, I certainly would. I’m sold on the lighting and K1 filtration.

Would I change anything? I’d possibly buy some clips and a single pane of glass to act as a cover, but I’m also wary that using marine water it could get salt-creep quite quickly. The inclusion of an automatic water-topping device might be nice, but that’d be more money on top. For now, I’ll take it as it is.