Jeremy Gay checks out these ultra-cool looking marine and freshwater LED lights for the nano aquarium.

A definite contender for best looking LED aquarium light, these small, slick-looking units appeal to everyone who claps eyes on them and come in a fetching black and blue for the marine model, and modern, minimalistic white with a dash of dark red for the freshwater models. They even look nice underneath, with a mirrored finish and a clear, acrylic, oval trim, which glows blue when the units are on.

There are more to these than just good aesthetics — they’re mini luminaires in their own right with both models fitted with ten 3w Cree LEDs, with a nice white 7-8,000K colour temperature on the freshwater and a combined colour temperature of between 7,000K and 25,000K, white/blue balance adjustable on the marine model.

Use one unit per 40 x 40 x 40cm/16 x 16 x 16" of tank space and you’ll have enough PAR (light output) and the right spectrum to grow either the most demanding plants or hard corals respectively, and both models come with 30 increments of dimming, which is actually 60 on the marine as you get 30 blue settings and 30 white, as well as either just blue or just the white diodes on their own.

Unlike some other LEDs, however, these also come with clever little sunrise and sunset sequences that fade the light in for 15 minutes when you first turn it on and can be manually set to then fade the light out for nine minutes before you want to turn it off. (Note: if using a standard plug-in timer in conjunction, it will fade in when first turned on, but your timer will cut out the fade out as it just straight cuts the power.) The dimming, sunrise and sunset, blue/white adjustment or full manual override are built into every unit and controlled by discrete touch-sensitive buttons on top.

Once you set your brightness or blue/white balance, it remembers it too, so it will ramp up and down to your preset level the next time it comes on. 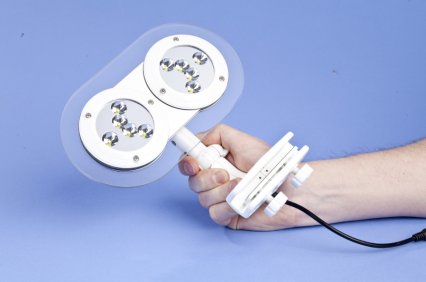 Simple to set up

There’s nothing to assemble, so simply take the light out of the box, clamp it onto the tank and plug it in. It says you can set the whole thing up in a minute so we tested it and, yes, you can.

The light, controller, arm and clamp are all combined into one neat unit, and the good news is you won’t have to buy any accessories on top, like brackets or controllers. A nice added touch is the angle adjustable head, which can tilt back, moving the main focus of the light beam to an area nearer the front of the tank if you so desire.

Passive cooling is the icing on the cake, so no noisy fans, which I think can ruin an otherwise peaceful aquarium.

There isn’t much not to like. Each unit is only recommended to illuminate a 40 x 40 x40cm cube of water, or about 64 l/14 gal, so you’ll need two for an 80cm/31" tank and three for a 120cm/47", although ea do also produce a rather nice bigger brother to the eaLED Marine called the eaLED Reef. This is a full LED luminaire in every sense of the word and is more than capable of providing more light for the larger aquariums that may require it. 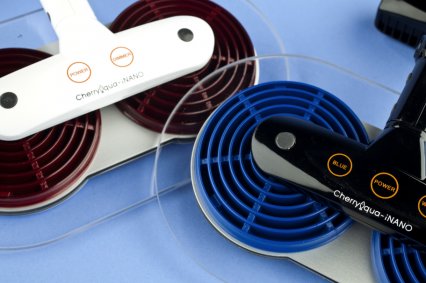 No faff, just cool, new lighting that you, your plants or your corals can use. Marine nano tank owners will be all over these, and they’re selling at a price that people are prepared to pay. Keen freshwater aquascapers may also want to have a look and feel, as the freshwater model has the perfect combination of plant-growing capability combined with great looks — essential criteria for the image-conscious 'scaper.