If you're dead set in your mind that you don't like lifestyle tanks, you'll hate this. But I implore you to remain open if you're on the fence, as the Norrom has novelty mileage, says Nathan Hill. Unlike many tanks from non-aquatic companies, this one has been thought through.

Let me reinforce the point above. In the comprehensive and concise instruction manual come some 'do not' points. They include' do not overstock your aquarium — the total length of fish should not exceed 20cm; do not overfeed your fish — a hungry fish is a healthy fish; do not replace the sponge, carbon pellets of ceramic rings at the same time as each other — it can cause a lethal chemical imbalance'. Furthermore, Norrom 'strongly recommend cycling your aquarium before adding any fish, in order to ensure that the water quality is habitable...' Yes, that’s right. An aquarium company is actually suggesting cycling before you add fish. There’s even a link to a webpage to talk you through it.

The Norrom is a 40 l, upright cylinder made from some of the nicest acrylic I’ve seen. The top and bottom trim, in a selection of finishes, is easy to remove and swap (should the urge take you) and if you’re the kind of person who has a 3D printer knocking about, you can download a template to make your own replacements at will.

The filter runs on an uplift principle, and the tube screws into place with an unrivalled precision — there’s no shaky push-fit affair here. In the filter chamber sits a foam mechanical filter into which there is a clear cut trench for carbon (or other resin media, if you so choose), while biomedia sits around the outside. On top of that you can place your decorative stones, which come as either white or black cobbles (supplied, and you choose which you want).

What’s very clever is what you don’t see, not what you do. The air pump sits under the tank, with a non-return valve feeding through to the base of the uplift, and — brace yourself — the light is also down there. I was initially thrown by that as well, but yes, the lighting, a cluster of LEDs arranged in a ring, are fixed to the base of the tank, meaning there are absolutely no cables running up the height of the aquarium. It is truly standalone. 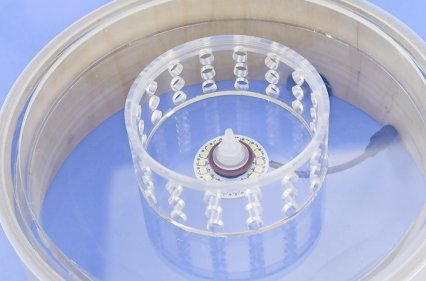 The lighting beams directly up, and then bounces off a mirror built into the inside of the hood. Now, some of you will likely want to shout at me about how 'unnatural' or stressful for the fish it might be. Well, unless you’re sat on a perfect biotope replica for your own fish, with rainfall, sunrise and sunset patterns, and seasonal changes, then you’ll excuse my rather pronounced throat clearing. Maybe some fish won’t get on with this lighting set-up, but it’s no worse than the flickering fluorescents I see all too often.

The light is controlled with a dimmer switch, though I don’t know how easy it’ll be to change or repair in the event of a fault. Is it any good for plants? Maybe, but the substrate system won’t be, so it’s all a bit academic.

The stumbling block for many will be the lack of heating. You could probably add one, but at the risk of ruining the cable-free appearance. Otherwise, you’ve a choice of temperate fish, of which Norrom suggests a few such as Zebra danio, WCMM, and — temperature consistency pending — Neon tetra. What’s wonderful is that there’s no mention of goldfish. I’ve been all over the website, manual, packaging — everywhere. I hope other manufacturers are seeing this, because it is what we want.

In its standard form, this will appeal to a certain subset of IKEA shoppers, and it should come as little surprise that Norrom is a Swedish design (though it is built in the UK). The limited range of substrates and fish mean that it will for the best part be relegated to being an attractive ornament in stylish homes. But that’s not to say it’s without potential.

As a nano reef with bright zoanthids, some tinkering with additional lights, and a couple of tiny gobies, it could be the project of the year. As an aquascape with some alterations to the filter system, it could be a tube of green heaven, crawling with shrimps. I even think I could make it work short term with a handful of young shiners and some plastic plants.

The price might put some off, but for a small-batch, one off design of this standard, it’s about right.

I opened it up in an office of hundreds of people, and not a single one had a bad thing to say about it. I’m already bored of telling people they can’t have it.

A new venture done right, Norrom has researched the market and understood what it needs to do to be a part of it. When it’s bumping out better advice than some major manufacturers, it’s worth taking note. If you fancy making some tweaks and personalising one, I doubt you’ll be disappointed. I can’t wait to experiment with mine.