Nathan Hill checks out this unusual take on the popular internal canister filter.

Here’s a no bluster, straightforward canister filter. Don’t get me wrong, I love features on a filter ­— I’ll take rotating duck bills, Venturi outlets, in-built spray bars and flow displays all day, every day. But sometimes I just want a bog standard pump with foam and some suckers that I can whack in a tank and leave to it.

The ASAP 700 filter is a curious design. While most of us are used to having our internal filters top heavy, with the pump sat near the water’s surface, this thing does it all backwards ­— it’s a pusher, not a puller. Where usual designs drag water through various stages of media and finally yank it through an impeller chamber and spit it back in to the tank, the ASAP 700 pump sits underneath the media. It drags water in through a removable plastic body, and then pushes it up through a long chunk of foam, and out of a spout at the top of its smokey-cased canister.

The benefit of this design is that it’ll run in a shallow set-up, like an aquaterrarium. As long as the motor is submerged, it’ll pump through — 5cm of water depth is all that’s needed. So, that quirky, half-filled tank you always wanted to try? Now you can. That’ll also come in handy for breeding projects where it’s beneficial to slowly lower the water level before replicating rainfall.

Flow rate on the 700 is 650 lph, and that uses up just 6.8W of power. AquaEl claims this will filter an aquarium of up to 250 l capacity, which I guess it will if it’s really lightly stocked. Personally, I think this will be good between in tanks between the 120 and 180 l range, which I base on sponge size and how much it churns out.

You can twist the entire filter cartridge through 180° to direct flow, but that’s where controllability ends. 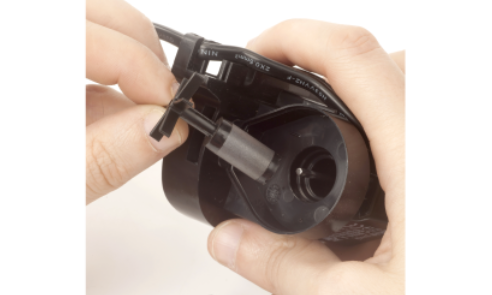 Cleaning the filter is straightforward enough, though not the easiest task. By rotating the canister fully, it comes away from the pump assembly, and you’ll see a black inlet on the bottom of it. With a little fighting, this inlet pulls off, giving you access to the foam.

Prepare to get messy extracting it, as it’s a bit of a ‘ship in a bottle’ moment where the foam is larger than the hole you’re trying to pull it through. Getting it back is slightly worse, as you’re trying to make sure the foam sits flush to the top of the canister (otherwise the water will just bypass it), while trying to ensure the media is sat in such a way that you can get the inlet nozzle behind it. After a minute of faff, I just say ‘that’ll do it’ and give up.

Getting to the impeller, however, has to rank as one of the easiest assignments I’ve ever had in fishkeeping. The cover comes off with a basic clip action, and goes on just as simply. It’s actually harder to clean the foam than the working parts — go figure.

Despite the ASAP 700  lacking user comforts, there’s a plus side. This thing is cheap, a bit like a budgie. A little snooping around and I find it out there for under £20, while I can get a couple of spare foams for under a tenner. Now that’s a bargain.

It does a job, and it does it for a fair price. No frills, and it isn’t the prettiest thing out there, but that’s not the point, I guess. I’d buy one.