Steven’s new book is a fastidious exploration of a superfamily of catfishes that frequently slips under the radar. 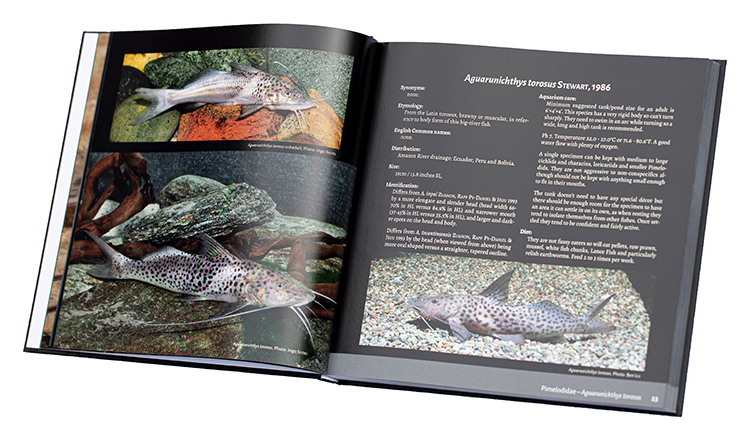 Steven’s new book is a fastidious exploration of a superfamily of catfishes that frequently slips under the radar. With some 220 pages, and covering 120 species over 41 genera, Steven’s work is as valuable to researchers in the field as it is to hobbyists at home, and the author has a fine pedigree to create this — he’s an amateur ichthyologist with a background in catfishes, not only describing them but also having one named after himself.  Steven has collected these fish in the wild, swum with them, even eaten some.

Credit needs to be given to Steven’s image sourcing. While the style of the book has an emphasis on formality rather than creative flourish, each fish description is supported with a photograph of praiseworthy sharpness and clarity.

From the lay hobbyist’s perspective, the book should not be considered as a sort of fishy ‘Argos catalogue’ with page after page of prospective future purchases. In many cases the species mentioned are giants, huge fishes of Zungaro-or Brachyplatystoma-sized calibre that are all but impossible to keep. The writing surrounding some of these fishes is cautionary, suggesting tank sizes dozens of feet long. To try any of the catfish in smaller set-ups, the writing explains, is to take a risk you’ve been duly warned about.

The book is arranged, after the usual introduction formalities (and some clarity of abbreviations and terms), by family: Pimelodidae, Heptapteridae and Pseudopimelodidae respectively. Within each, genera are set out in alphabetical order (which makes navigation so much easier when looking for a quick reference), after which each species is allocated however many pages it requires to
fit all of the available information.

Each entry consists of scientific names and synonyms, etymology, common names, distribution, ecology, size (sometimes including potential weight), identification methods, aquarium care and diet. To reiterate, some of the species in here (notably those towards the front of the book) are not suited for domestic aquarium life. Steven draws attention to this fact in a way that reveals more than a little reverence and empathy for these giant cats.

Still, there are plenty of fish presented that you can keep, and for the home aquarist this is where the book really comes into its own. My own experience with many of the uncommon pimelodids (something echoed by many catfish enthusiasts I know) is that a great number of them only appear in stores as accidental bycatch, the retailer no more knowing what they are than the bemused aquarist hoping to buy them. Now I can identify them, and confidently.

Brooding on it, maybe there is an ‘Argos catalogue’ element after all. Even as a diehard catfish fan, this book introduced me to many fish I’ve never seen in the flesh before; charming Chasmocranus, and elongated Phenacorhamdia are amongst the genera that I shall now forever be on the lookout for. It hooked me in, it inspired me, and left me covetous.

For the catfish fan, Pims is a must. It’s not the cheapest book, but with the weighty hardback binding you get what you pay for. You’ll not find a more complete work on Pims, and frankly there’s nothing else on the market that comes close.