On test: Kessil A80 LED Luminaire With distinctive design and passive cooling, Kessil’s latest offering could be just the ticket for small fish-only tanks or nano systems with relatively undemanding invertebrates.

The luminaire comes with a generous 24V DC power cord and a mounting bracket. The A80 is a cute little thing, measuring just 12cm across, and 2.5cm thick. The most striking thing about the design in terms of functionality and aesthetics is the clever use of the powder-coated aluminium body as a heat sink. A scallop shell apparently provided inspiration for the unusual design, and the unit certainly does have an almost ‘organic’ shape. This is quite a departure in terms of design compared to Kessil’s other, larger models.

Whereas ‘cannon’ models like the A160 and A360 feature fan-assisted active cooling, the A80 is purely passively cooled. I’ve never had any issues with the reliability of Kessil’s fans, but if it’s possible to ditch them in favour of passive cooling, then why not? Removing any moving parts means no noise, should increase reliability and will improve resistance to water splashing and salt creep.

Presumably this is made possible due to the relatively small power draw (15W at maximum) of the luminaire’s array compared to larger units, making passive cooling a viable option without resorting to excessively large and heavy heat sinks. The array itself is tiny, and comprises 15 individual LEDs arranged in a tightly-packed cluster less than 10mm across, with secondary lensing. Thanks to that lensing, the spread is ample for the recommended 35 x 35cm for medium-demand systems. The blending is spot on, so no disco effect — and you’ll get shimmery glitter lines galore with suitable surface water movement. 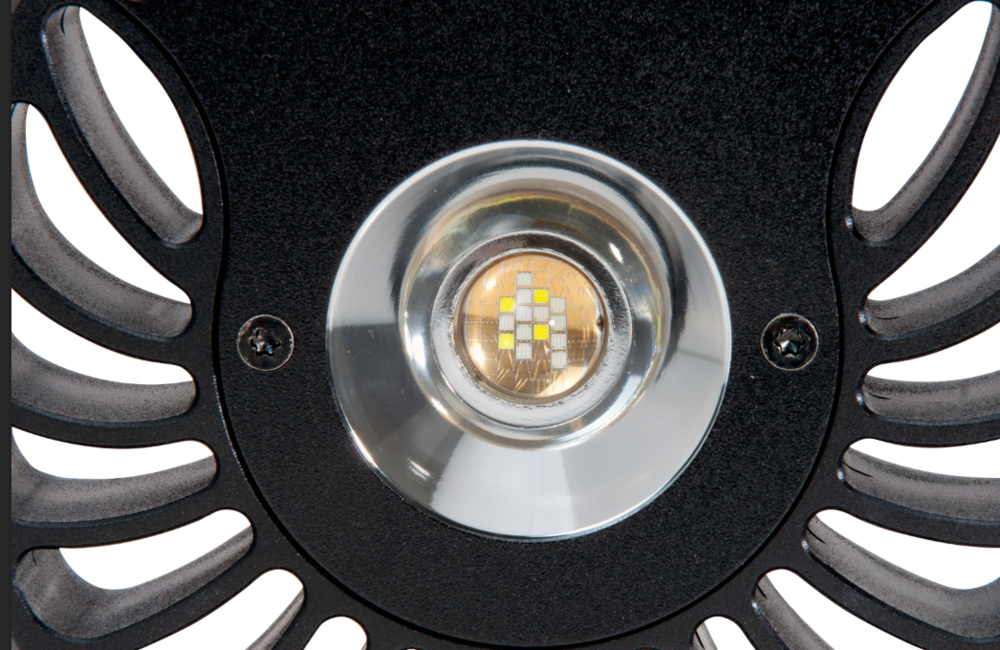 Kessil doesn’t provide PAR readings for the A80, which is a shame. It’s bright, but even on full power it’s not going to cut the mustard as the sole light source for most SPS given the 15cm+ height you’ll usually be mounting it to get the desired spread. It’s obviously beefy enough for smaller fish-only and FOWLR tanks, and will be suitable for mushrooms, soft corals and LPS in tanks around 35cm deep. But at only 15W, it’s a stretch to ask the A80 to satisfy very light-hungry corals; you just won’t get enough penetration. To be fair, Kessil suggests that to maintain SPS, the A160 and A360 (at 40W and 90W respectively) are the way to go. In this case, the A160 is good for a 45 x 45cm cube, and the A360 for a 60 x 60cm cube.

In terms of controllability, you’ve got all the same gubbins as the larger Kessil models. The A80 is adjustable in terms of colour temperature and intensity, courtesy of two dials on the luminaire’s upper surface. On the marine ‘Tuna Blue’ model, the colour temperature can be adjusted from around 10,000°K to an intense, coral-popping actinic.

There are also input and output ports: if you want to ditch manual knob-twiddling and programme a custom schedule, the A80 can be used with Kessil’s nifty Spectral Controller (or any other controller using 0–10V output). Two or more A80s can be daisy-chained by running the output from one A80 to the input port of the next with a ‘Unit Link Cable’.

A freshwater A80 ‘Tuna Sun’ version is available, as well as the H80 ‘Tuna Flora’. These will be of interest to those growing macroalgae in refugia. Whereas the Tuna Sun is a warmer, 6000–9000°K light than the Tuna Blue, The Tuna Flora omits white lights altogether, providing four spectral profiles specifically geared to plant development. If you’re after optimal algal growth these are worth looking into — in fact, the H80 looks like it’ll be amazing. Kessil is world-renowned for its horticulture and hydroponic lighting, so this should be quite something.

Kessil A80 with Gooseneck — this mounting option is being offered for free right now (RRP £29.95).

Mounting options include the ‘top mounting adaptor’ (a simple bracket allowing the luminaire to be screwed into a suitable surface such as a hood), or the Gooseneck, which will be the choice of open-topped tank owners. The A80 has a dedicated miniature Gooseneck (currently offered for free, bundled with each luminaire). Attaching the luminaire and installing the Gooseneck is a breeze, and it’s compatible with rimless tanks or those with Euro bracing. It gives plenty of scope for positioning and angling the light to your requirements, but be careful when adjusting it (especially with thin glass) as there can be a fair amount of leverage on the base. A complaint from some about the Gooseneck is that the luminaire’s cable is simply attached along its length with zip ties rather than being discreetly hidden away, but this doesn’t bother me.

For smaller tanks with less demanding corals, the A80 is worth checking out. It isn’t exactly a steal at this price but it’s well-made and stylish, and there’s that free Gooseneck...

Price: A80 luminaire £149.95; A80 Gooseneck £29.95 when purchased separately, although a permanent offer includes a free Gooseneck with every A80.