Well packaged, and built to order, I have very much enjoyed playing with this 1m long unit that CoraLed put together for tesing.

The light is well constructed, although some of the finer details such as silicone sealing could possibly be polished up a little. The mounts for the aquarium, two padded legs that sit at each end, are easy to fit and to adjust, and once in place the unit looks smart.

My only reservation is that the leg mounts are quite high, to create an adequate spread of light underneath, but for a standard height of tank this can result in some glare when viewing the aquarium. However, with ceiling mounting this is easily rectified. 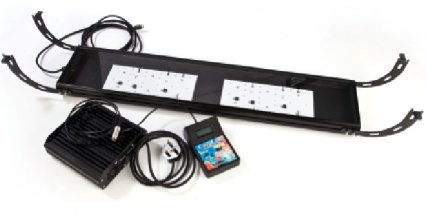 A ballast and computer are part of the package, and the computer is simple to use once you’ve played with it a few times. For those technophobes that dread the idea of programming a computer, there’s an option to bypass and run the unit on a plug in timer. Although, given the built in clock, and the ease of leaving the item alone once set, then it would be a terrible waste to do this.

The controller allows for very precise setting. Both white and blue spectra can be tweaked up or down at 1% increments at a time, allowing for the exact desired ratio of lighting.

Alternatively, it can be allowed to run at a pre-programmed cycle, gradually brightening itself in the morning and dimming itself in the evening. For the marine keeper, at which this product is aimed, a little playing with the settings will allow tweaking of a lunar cycle over a 28-day period, allowing replication of a natural environment.

Rated to IP68, there’s little danger of being fried if the unit does slip into the drink, which is unlikely at best.

Power consumption is pleasingly low. My unit has two boards within it, each consuming some 48W of power.

Each of two boards has an array of 12 white LEDs, and six blue. In the tank, this translates as an excellent spread of light, belittling the fluorescents that were present before. Even in tandem, the T5 tubes struggle to make any real presence.

Light for power consumption is rated at 118 lumens per watt. The penetrative power of the lighting isn’t to be underestimated, and the pleasant ripple associated with LED makes for visual attraction in the display.

Output is high depending how directly underneath an LED you are. At water’s surface, readings of 450-500 PAR are found, although at 30cm/12" depth the range can vary from 90-160.

The units can be built to order, and unusual sizes are catered for. Cut off points are in the region of just over 3m length, and turnaround on a unit can be expected in about two weeks. Installations can be performed if required.

Part of the real benefit of the unit is the fact that all of it just runs on the one plug. Until now, lots of lighting and controllers meant multiple cables, but the CoraLed unit is really very tidy and minimalist in that respect.

My unit is currently being trialed on a freshwater system, where I wish to see how it fares on plant growth – so far it has worked admirably.

However, playing with the unit on marine set-ups, it has to be said that the effect is very agreeable, bringing out colours in a much more pronounced way than T5 units do. I would be cautious about placing some corals too close to the LED’s initially, and would definitely use the controllability to gradually wean some corals onto brighter lighting over a period of time, as this beast could shock them.

The unit isn’t cheap, but I think for what you’re getting, and given the 10-year lifespan of the LED’s, it can be considered a long-term bargain. But that initial outlay could be a real punch in the kidneys for those on a budget.