The Fluval range of canister filters is pretty much a staple of the hobby these days, so it comes as no surprise that Hagen should choose to continually update these devices.

The revised 306 filter is visually very similar to the original, aside the changes in trim colour, clear/white strainer and duckbill, and square quick release mechanism for the pipe connections.

The biggest difference is the increased flow from the new impeller well designs, which feel a lot more spacious than the originals, too. Not only that, but they seem to be slightly easier to remove the impellers from. A trivial point, but one that I can’t help but to note as a plus.

The impeller cover itself is better fitting than the original, and if I’m not mistaken, the 306 on my aquarium runs slightly quieter than the 305 that it replaced. 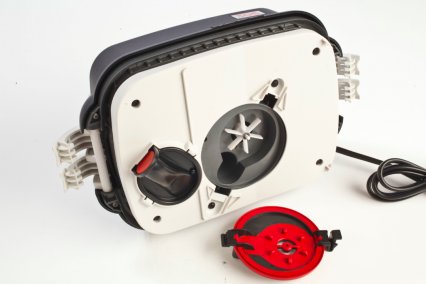 Flow is increased by over 10% in the new version, bringing it to an output of 1150 lph over the original 1000. The difference in flow is immediately noticeable, making the ‘go-faster’ red colouring all the more apt.

The primer handle has been tweaked to make it more sturdy, with the originals being easy to bend, and in some cases snapping off. The newer version allows for a bit more aggressive priming, and sits better in the fingers as well.

Something you do notice is that the new version comes with extra media, in the form of mechanical blocks that sit in the larger chambers, where originally there was only bio-media, carbon and then empty space. The other media is still there, it’s just complimented now. Even fine finishing pads make an appearance giving an extra touch that I felt earlier versions to be lacking as standard.

A final obvious update is the clamping that holds the head to the body. The ’06 feels much sturdier when being fastened than its predecessor did, and immediately inspires confidence. Although I never had issues with the former, this upgrade is more than welcome.

Rated for tanks up to 300 l/66 gal, the 306 looks set to once again dominate the canister market of the UK by being both user friendly, reliable and realistically priced by retailers.