Nathan Hill reviews what he suspects could be the most comprehensive Tanganyikan fish book ever written.

Ad Konings is a regular PFK contributor (and a personal favourite) on the cichlids of Africa, and especially so on those from the lithe, abyssal Lake Tanganyika. Konings has spent much of his life living by, diving in, and studying the lake, and there’s likely no better authority on its fishes.

408 pages, the hardcover bound work builds on previous volumes, making it possibly the most comprehensive Tanganyikan fish book ever.

The format is easy to follow, comprised of a mix of continuously running copy, interspersed with detailed images of any fish being mentioned.

If you’re after an instructional book, with step-by-step guides to setting up Tanganyikan tanks, or pages of preamble and technical data on the equipment and chemistry required to make your own set-ups, this isn’t it. Konings’ book is so much more than that.

The mainstay of the work reads as a guided tour of the regions of the lake, from the rocky habitats where waves crash, down to the deep recesses and with everything in between. Within each region, Konings systematically works through any genera of fish found there, covering such areas as phylogeny, distribution, feeding and spawning behaviour, geographical variants, and any associated trivia.

Periodically a fish will be presented in the context of an annotated map, with photographic examples of each variant placed at a particular point. From this perspective, the identification of regional morphs becomes simple.

The book is non-instructional in tone, but the depth and clarity with which Konings writes leaves nothing to the imagination, and herein is the strength of it. As a commentary on the exact wilderness conditions of Tanganyikan fish, along with the contextual information of behaviour, any aquarist can soon comb through for the essential data that need incorporating into a successful tank.

Furthermore, as Konings has taken pictures of fish from such a wealth of well documented locations, the book is a somewhat authoritative catalogue of colour morphs according to geography.

Also noteworthy is the volume of information Konings has gained from personal observation. The fish that he has watched in the wild have displayed a myriad of traits — breeding, predation, defence and so on — that have likely never played out in aquaria before. For the aquarist trying to fathom the quirks in their Tanganyikan fish, if the answers aren’t here, then they might not be anywhere.

Best of all, despite Konings’ inherently academic background, the book is written in accessible prose with a total non-reliance on jargon. Whatever level of fishkeeping you’re at, you’ll be able to read and learn from this edition. 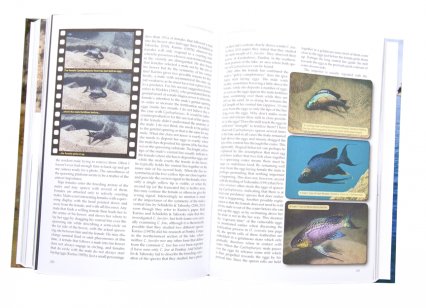 Comprehensive yet accessible, well illustrated, easy to digest, occasionally surprising and always engaging. The marriage of Konings’ writing to his archive of pictures makes this a book that anyone serious about Tanganyikan fish should have access to.