Ballan wrasse bred at a British aquarium are helping their farmed cousins, salmon and trout, by providing an ecologically friendly solution to sea louse infestations.

Scientists are hoping that when the wrasse are released into the fish farm cages they will devour parasitic sea lice and eliminate the the need for any synthetic pesticides.

Sea lice, which resemble tiny horseshoe crabs, are a real danger to the health of farmed fish. While a few lice will cause relatively minor damage to the fish, a heavy infestation can cause serious fin damage, skin erosion, bleeding, and deep open wounds.

The Ballan wrasse is native to UK waters and has a similar habitat requirements to the farmed fish. As the wrasse can eat up to 300 lice in one meal, it is hoped that they will help minimise the number of parasite found on fish farms.

Sourcing a dependable supply of Ballan wrasse was a key factor for the project as Dr Jim Treasurer from the Ardtoe Marine laboratory explains: "While wrasse have been used for the control of sea lice in Norway, there are environmental reservations about taking wrasse from the wild. It was crucial that we found a reliable supply of Ballan Wrasse eggs for rearing in our hatcheries. The solution came from The Deep Aquarium in Hull, where the fish were breeding in great numbers." 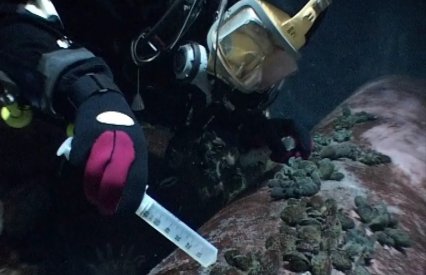 Senior Aquarist, Richard Oades is overseeing the project at the Deep: "We found that our imitation pipeline in our Northern Seas exhibit was an ideal surface for the wrasse to lay their eggs. We had to rapidly develop a method of carefully removing the eggs - this turned out to be a paint brush and turkey baster! So far, Ardtoe have reared over 400 Ballan Wrasse fry which will be monitored to find out how efficient they are at cleaning farmed fish."

Similar projects are on-going on Norway, with scientists predicting that Ballan wrasse could be key to fighting sea lice without man-made pesticides.