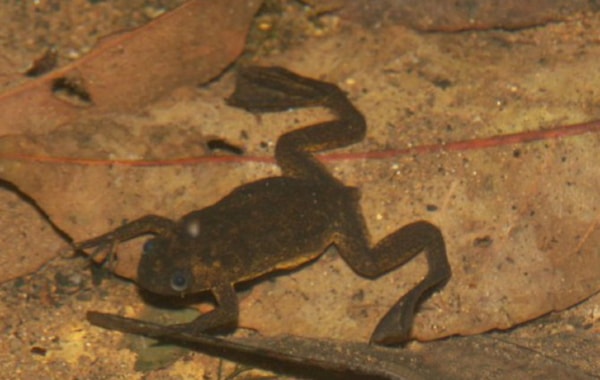 A team of amphibian keepers at ZSL London Zoo is the first in the world to successfully breed a critically endangered aquatic frog from Africa, marking a momentous step in ensuring the future survival of the species.

The Lake Oku clawed frog, Xenopus longipes, is ranked as number 35 on ZSL’s EDGE List (Evolutionarily Distinct and Globally Endangered) due to its perilous conservation status and unique evolutionary history.

Native only to Lake Oku, a single high altitude freshwater lake in Western Cameroon, Africa, the small, totally aquatic frogs are some of the most genetically unusual creatures in the world, having developed extra chromosomes throughout their evolution.

Four of ZSL London Zoo’s 13 tadpoles have already metamorphosed into juvenile frogs, and ZSL’s team of zookeepers has been working tirelessly to ensure the precise conditions are maintained for the precious amphibians.

Ben Tapley, head of the reptile and amphibian team at ZSL London Zoo said: "These critically endangered amphibians represent a unique branch of the evolutionary tree of life. Due to their restriction in the wild to just a single and relatively small site, they’re incredibly vulnerable to threats of invasive species or disease, which would be catastrophic if introduced to Lake Oku.

"We worked closely with field biologists to obtain very precise environmental data from Lake Oku which we replicated in our facilities here at ZSL London Zoo.

"We will now be able to share our insights gleaned from naturally breeding these frogs with conservation biologists working with the species in Cameroon and zoos around the world to help ensure a sustainable population can be maintained.

"It’s a phenomenal achievement for the survival of this species."