When displaying fish is not enough... UK zoos and aquaria are adding creature conservation programmes to their agendas. Nicolette Craig looks at some far-reaching projects.

My husband is curator at a wildlife park which has one of the largest collections of rare and endangered animals in the country. Most people recognise the importance of zoos for education and conservation and are impressed by the conservation programmes to which his park has committed itself.

However, how many aquaria in the UK are acknowledged for the conservation projects they undertake?

Most decent UK zoos and aquaria are either part of BIAZA (the British and Irish Association of Zoos and Aquariums) or their European counterpart EAZA. These institutions ensure their members uphold certain criteria in terms of animal welfare, education and conservation work.

Two freshwater programmes for livebearing killifish and goodeids, have been combined in what is called the “cypritag” (after the order Cyprinidontiformes), and there are several marine projects, including for elasmobranchs, seahorses, coral, jellyfish and cardinal fish.

No habitat
Many may feel that, to be effective, a conservation programme must involve aquarium breeding a rare fish then releasing it directly into the wild. However, this is rarely the case and there may not be any habitat left.

Brian Zimmerman, the assistant curator at London Zoo and coordinator of the European Freshwater TAG, told PFK: “Some aquaria will release fish simply for the sake of PR, however the International Union for Conservation of Nature have strict guidelines for reintroductions and by and large (for fish) consider them inappropriate and risky.

“Then, often for more endangered fish, there is simply no environment left to reintroduce them to. We have an important job to do, but it is seldom reintroduction.”

So what part do UK zoos play, if not re-introduction? All aquaria I contacted were pretty unanimous in citing research, education, a safety net for wild populations and  providing support for in-situ conservation programmes.

Chester Zoo are key in aquatic conservation and research. They have several projects, including for threatened fish, aquatic salamanders and freshwater turtles. In-situ and ex-situ projects are undertaken and much money is devoted every year to research.

“We are also developing research programmes aimed to identify best practice in long-term fish breeding programmes, to maintain both the genetic diversity and natural phenotype.
“We also maintain conservation breeding colonies of critically endangered and even extinct in the wild species of goodeid from Mexico, while supporting an equivalent ex-situ programme in Mexico and associated field surveying and conservation initiatives.”

Conservation is not only important overseas. Project Seahorse was set up in 1996 by ZSL and has established 15 no-take Marine Protected Areas (MPAs) worldwide.

In 1999 the Seahorse Trust was founded by Neil Garrick-Maidment and works with ZSL but focuses much more on seahorses in the UK. The Trust oversees several programmes, including surveys, behavioural and nutritional work and captive breeding, including the first breeding of two British species; the Spiny and the Short snouted seahorse. 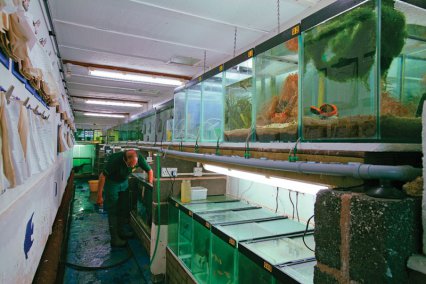 What are zoos and aquaria for?
Richard Gibson at Chester Zoo says: “Zoos and aquariums need to be far more than exhibitors of animals. ‘Entertainment’ is an important part of any visitor day out, but education, research and conservation are the pillars on which any modern-day animal collection must build current and future programmes.

“We have a unique opportunity to educate and inform our visitors about the fish they see and the threats they face.

“Zoo and aquarium collections can, if maintained appropriately, represent valuable research opportunities — much of which can inform field conservation biologists trying to save the same or similar species in the wild.”

Crayfish project
Bristol Zoo aquarium are also looking closer to home, setting up a unit with egg-carrying female white-clawed crayfish. The aim is to raise the young and reintroduce them into a ’clean’ site in Somerset.

Assistant curator Jonny Rudd said: “It’s the first time we’ve tried anything like this.”
Staff are also planning a new European eel public display. Numbers across the continent have declined sharply and the Environment Agency are planning to ban exporting eels and severely limit their fishing season.

Jonny thinks that education should be paramount in most aquaria. He added: “The principle job of any aquarium should be raising public awareness. This can be from a simple sign showing how to look after a home aquarium to something far more far-reaching, such as issues about sustainability and marine reserves. We can play a key role in making sure that the public know about the issues affecting aquatic life”.

When it comes to breeding fish, we can increasingly look towards more novel ways of conserving our wildlife.

Brian Zimmerman added: “One of the most important jobs of any zoo or aquarium is to act as a genetic library: a safety net, so that with work to rehabilitate habitats we can hopefully reintroduce some fish we keep.”

With this in mind ZSL have become involved in a project known as the ‘Frozen Ark’. Working in conjunction with Luton University they have started collecting tissues and gametes hoping one day to be able to rear these to adults and reintroduce them.

He continued: “So far we have had some fair success with cyprinids such as carp. We don’t know what the long-term viability is, of course, and there are obvious difficulties for collecting gametes with some species such as mouthbrooders. However, we are hoping that this can become one valid method of preserving genetic information about fish.”

One of the most important roles zoos and aquaria can play is by helping protect the habitats of threatened species. Dedicated conservation initiatives in the wild are supported by many better zoos and aquariums and this is where conservation support goes furthest.

In May’s PFK I wrote about the sustainable fish projects some UK aquaria are involved in, such as the ZSL-co-ordinated Project Mamiraua in Brazil, and the US and Brazil-based Project Piaba which is working with Chester Zoo to study and protect Puntius denisonii in the Western Ghats in India.

These projects have one common feature: while focussing on protecting fish species they also have the knock-on effect of protecting the ecosystem where the fish are found.
So next time you think UK zoos and aquaria don’t do much for conservation, think again.