Video: First ever footage of Ruby red seadragon in the wild! 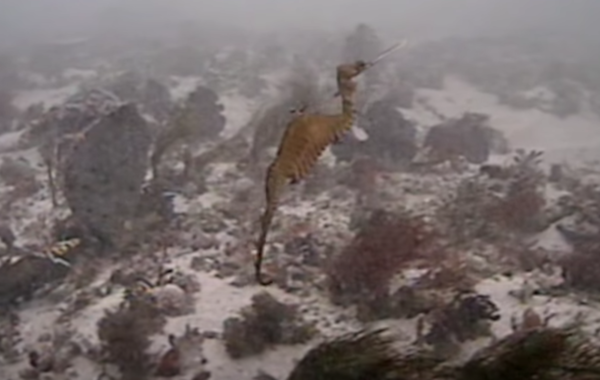 The bizarre Ruby red seadragon, Phyllopteryx dewysea, discovered in 2015, has been filmed in the wild for the first time by scientists from Scripps Institution of Oceanography and the Western Australian Museum.

The footage below was shot near Western Australia’s Recherche Archipelago and has given new insight into a fish which has achieved an almost mythical status since scientists described the previously unknown species from preserved specimens misidentified as Common seadragons — one of which had been collected nearly 100 years ago.

Unlike its relatives, the Leafy and Common seadragons, the Ruby lacks the ornate leaf-like appendages that give it its distinctive appearance — but these are for camouflage after all, and living in deeper waters as the Ruby seadragon does, there’s far less kelp and seagrass for it to try and blend into.

It also differs from other seadragons in that it has a prehensile tail, more akin to those of seahorses and pipefish. From the new observations, the researchers suggest that Ruby seadragons may use their curled tail to hold on to objects in the high-surge waters where they are found.

During encounters with the fish, the researchers also observed it feed by striking at prey, a behaviour common to the species. These observations of the species in the wild confirmed the fish’s ruby red coloration and that their habitat lacks kelp and seagrass, but instead is dominated by sponges, once considered an undesirable habitat for seadragons.

The researchers believe the Ruby seadragon lost its appendages through evolution, and that its red colour acts as camouflage in the deeper dimly lit waters where it lives. Whether they evolved a curly tail independently from their pipefish ancestors, or simply retained it while the other seadragons lost it, will require further study.