This competition is held every year, as part of a pet trade show. It attracts aquascapers from all over the world. This year included the Russian winner from the IAPLC 2010, regarded as the world's most prestigious aquascaping contest. Other entrants included Oliver Knott.

Dan and I took part, as the only UK contestants. We were invited over as part of the 'Rainforest' team who are a German TV production company.  I was interviewed several times times during the contest, for TV.  Their main site is www.aquanet.tv

The 100cm tanks were fitted with 2 x 39w HO T5, with external filter and heater.  Substrate was supplied if required but all plants and decor you needed to source yourself.

The top ranking aquascape is shown above. Below are the second and third ranked aquascapes. 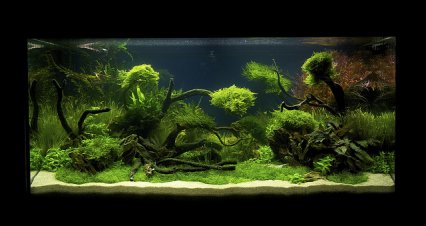 The standard was incredible, as you can see. Most aquascapers had spent months in advance growing-in their plants and aquascapes prior to the event. This is why they look mature.  We were at a disadvantage because we used brand new emerged potted plants.  Next year we will be better prepared.

The aquascape next to ours was grown on a 100 x 50cm piece of filter sponge. This way it could be transported from the entrant's home to the event and set up within a hour.

In contrast, Dan and I spent around 12 hours planting almost 1000 individual plant portions in an attempt to achieve a mature-looking aquascape.

There were many German entrants who also had the advantage of living relatively near the event. Dan and I drove over 1,200 miles in total.

I think our entry was the most natural-looking layout. The winning 'scapes all had mature plants, wood and open sand areas, so that's an interesting observation. There was some new plants to the hobby, including a bonsai version of Hygrophila pinnatifida.

The Danish contestants were the most friendly and we spent a lot of time together, eating, drinking and talking about aquascaping. 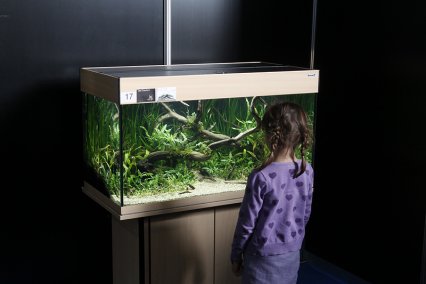 We didn't come in the Top 10 which was disappointing, but given the excellent overall standard and quantity of 'scapes with mature plants, it's no surprise. Our entry is shown above.

Next year will be interesting, as we know what to expect...

There's a video, but the final production will take some time.

More details can be found here.

Look out for full feature on the event in a forthcoming issue of Practical Fishkeeping magazine.