Last year the TTAA celebrated its 40th anniversary. This year the show will be held on a more sombre note due to the deaths of three leading lights in the area.

The TTAA council has decided to dedicate this show on September 30 to Ken Scott, Ronnie Flinn and John Cowan who have all died since the 2011 show.

Ken Scott was the chairman of STAMPS, as such, was responsible for a lot of the behind the scenes organisation of many shows. He oversaw the birth of STAMP, formed by a few friends in 2007, to becoming the biggest and most influential club in the TTAA area. 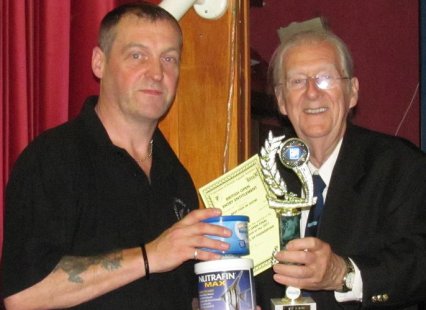 Ronnie Flinn (pictured above, receiving his Best in Fish Show Trophy from Dr. David Ford at last year's TTAA event) was on the committee of the old Birtley club, which disbanded in the 90's, and the Chairman/Show Secretary of the new Birtley club when it reformed in 2010. He was as a council member on the TTAA committee serving a term a its Vice Chairman. He, and other members of his family have showed in the north east and beyond for many years. Ironically, Ronnie won best fish in show at the last TTAA show, his brother and sister-in-law winning the Three Rivers Championship.

John Cowan, despite being an FNAS Judge and living over 100 miles away in Scotland, has been a friend of the TTAA region for more than 20 years. He first came to the north east as an exhibitor, and then regularly as a judge. John also worked tirelessly for fishkeeping in general and his own federation, FNAS, by running shows and auctions as well as producing their comprehensive size sheets.

The loss of these people was a shock to the TTAA region, and fish show world in general. At the last TTAA meeting, it was unanimously agreed to honour these three friends by renaming this year’s show a Memorial Show, and presenting a new, Chairman’s Choice, memorial trophy. We hope friends of the honoured aquarists, as a show of respect, will attend this show.

The TTAA is a group of societies in the north east that have come together to form an area association.

If you are interested in joining any of the clubs or coming to any of the events, visit the North East Aquatic Community forum to find out what's going on in the area, or the TTAA website. Both sites have information on clubs and events in the north east throughout the year.