Dicrossus is a small genus of South American dwarf cichlids, often known as checkerboard cichlids in the aquarium hobby. Two species (maculatus, filamentosus) have been known to science for many years, and a third (gladicauda) since 2008. Now two further species have been described.

German ichthyologist Dr Uwe Römer and his colleagues have published a paper scientifically describing the two new species, both known to science and hobbyists for at least 20 years under a variety of provisional names.

The first species now named Dicrossus foirni (pictured above), may be familiar as Dicrossus sp. “Peru”, D. sp. “Rotflossen”, D. sp. “Rio Negro”, or D. sp. “Doppelfleck”.  It originates from the middle and upper Rio Negro drainage (not Peru!), exclusively in left-bank (northern) tributaries of the main river upstream of its confluence with the Rio Branco. The female is pictured below. 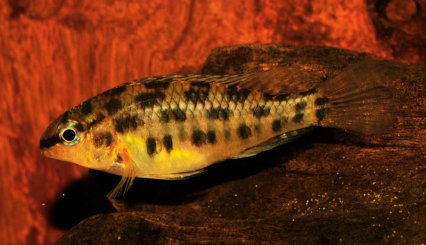 The name foirni is based on the acronym FOIRN for the Federação das Organizações Indígenas do Rio Negro, a non-govermental organisation that looks after the interests of indigenous peoples in Brazil. The authors thus acknowledge FOIRN repeatedly giving permission to travel on tribal lands in the middle and upper Rio Negro basin, as well as for carrying out observations on wildlife, especially insects and fish, in these areas.

The species has been found in clear, black, and white water, sometimes in the company of its congener D. filamentosus as well as other dwarf cichlids (Apistogramma gibbiceps, A. paucisquamis, A. pertensis), and the Cardinal Tetra, Paracheirodon axelrodi. 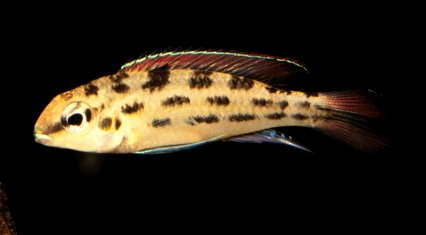 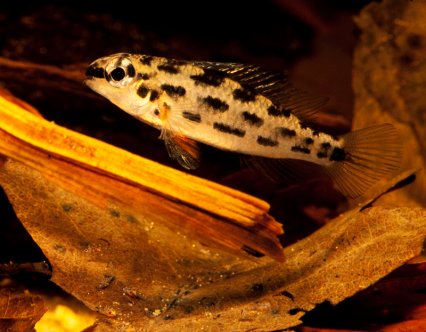 The second species, now named Dicrossus warzeli (male pictured top, female below), is thought to be endemic to the Rio Tapajós drainage and was previously known as D. sp. “Tapajós”.  It was discovered by and is named in honour of Frank Warzel, the renowned German expert on pike cichlids (Crenicichla), who died tragically young in 2004, at the age of only 44.

This cichlid has been found exclusively in clearwater streams with very soft, acid water (no measurable hardness, pH regularly less than 5.0, usually less than 4.0) and sandy bottoms with areas of leaf litter.

The two new species are thought to be more closely related to one another than to the other three;  genetic studies are being undertaken to investigate this.

Although this new paper means that all known Dicrossus species are now scientifically described, the authors conclude by noting that there are indications that the Rio Negro and Rio Orinoco populations of D. filamentosus are separate, albeit similar, species. Aquarists breeding filamentosus in their fish tanks please take note!