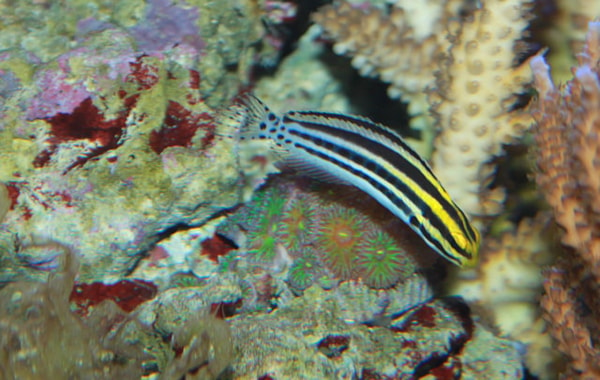 A group of fish popular with marine aquarists could offer hope for the development of new pain-killing drugs.

“The fish injects other fish with opioid peptides that act like heroin or morphine, inhibiting pain rather than causing it,” University of Queensland researcher Associate Professor Bryan Fry says. “Its venom is chemically unique and causes the bitten fish to become slower in movement and dizzy by acting on their opioid receptors.

“To put that into human terms, opioid peptides would be the last thing an elite Olympic swimmer would use as performance-enhancing substances. They would be more likely to drown than win gold.”

The fearless little blennies are found in the Pacific region, including on the Great Barrier Reef.

“Fang blennies are the most interesting fish I’ve ever studied and have one of the most intriguing venoms of them all,” Fry continues.

“Their secret weapons are two large grooved teeth on the lower jaw that are linked to venom glands.”

The unique venom means that the fang blenny is more easily able to escape a predator or defeat a competitor.

“This study is an excellent example of why we need to protect nature,” Fry says.

“If we lose the Great Barrier Reef, we will lose animals like the fang blenny and its unique venom that could be the source of the next blockbuster pain-killing drug.”