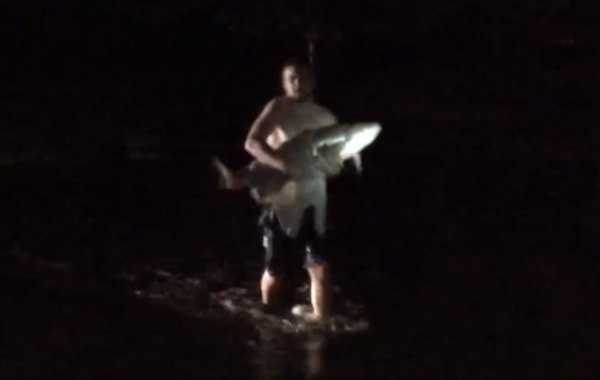 A teenager from the US state of Ohio waded through ankle-deep floodwaters in the dark to rescue a one-metre/40" Grass carp.

Jake Sawyer from North Royalton had spotted the fish swimming in the receding floodwaters in his street on Monday evening and was concerned that it might become trapped and die. He stalked the fish and attempted to catch it by throwing a towel over it, but when that didn't work he tried to push it towards a kerb.

"I just slowly put my hand on it, and then once it got comfortable with me, I just kind of bear-hugged it and lifted it up," he said.

Jake's monster catch was filmed by his brother, Luke and the footage was posted online.

Heavy rains that day had caused flash-flooding and Sawyer said he suspects the Grass carp had slipped out of its nearby pond as the water rose.

He carried the fish — estimated to weigh about 18kg/40lb — safely back to the pond.

You can watch his rescue in the video below. The main action starts after the two and half minutes mark.