An office worker who was eating a Sainsbury's salad for lunch at her desk was shocked to find a live newt staring up at her from the bowl.

Katherine Wood from Rochester in Kent was tucking into a lettuce, tomato and mozzarella salad and had already eaten several mouthfuls when she discovered the 5cm/2" newt.

She told the Mirror: "I could have actually put it into my mouth. As a vegetarian it was particularly distressing to find an animal in my food."

Fascinated colleagues gathered round to take a look at the stowaway.

"My lunch became the talk of the office," she said. "I felt upset for it and a colleague and I tried to give it water.”

Miss Wood rushed both the newt and the salad to Sainsbury’s Holborn store, from where it had been purchased.

The newt was identified by a wildlife expert as a Smooth newt — the most common species of newt in Britain — which had probably gone into hiding at the onset of the colder weather.

Customer manager John Jackson said: "It could have buried itself in a crate of leaves destined for the hand assembly bowl line and would have survived the washing process."

Unfortunately the newt wasn't in a good state and died before it could be released back into the wild.

Sainsbury's has apologised and sent Miss Wood a £25 gift card, but she insists the experience has ruined her relationship with salads and says she won't be shopping at the store again. 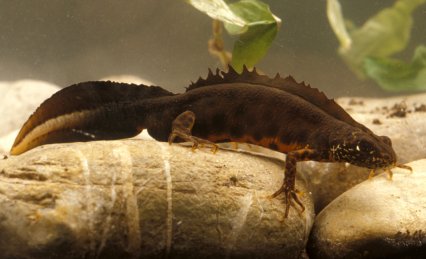 Newts have caused problems for Sainsbury's elsewhere. The discovery of a colony of Great crested newts at a pond in Portishead near Bristol could delay plans to build a new store on the site.

Great crested newts are protected under UK and EU law and the colony has to be moved before construction can begin on the £15 million Sainsbury's store. Trapping them cannot continue once the temperature falls too low, in which case work won't start on the new supermarket until next spring at the earliest.