Successful return of fish 'extinct in the wild' A cyprinid that was classified as 'extinct in the wild' has successfully been re-introduced to its natural habitat, with numbers having significantly increased three or four generations on.

The Yarkon bleak (Acanthobrama telavivensis) is a silver-coloured fish that grows to a maximum of 8"/20cm in length and is found only in Israel, where it used to be common in most of the costal river system.

But due to a combination of pollution and drought - the latter made worse due to the effects of pumping for irrigation - its numbers plummeted. In 2004 it was listed as 'critically endangered' and as 'extinct in the wild' two years later.

A team from Tel Aviv University, led by Menachem Goren, had managed to collect 120 of the fish several years before from the Yarkon River and Tut Stream and these had successfully bred in a special facility, run mainly by volunteer students as there was no money to fund the project. Despite having very little prior knowledge about the fishes' biology, within five years the number of fish had increased to 14,000 or more.

Meanwhile the government had made attempts to clean up the badly polluted Yarkon River, ensuring there was a permanent discharge of fresh water into the upper part of the river. 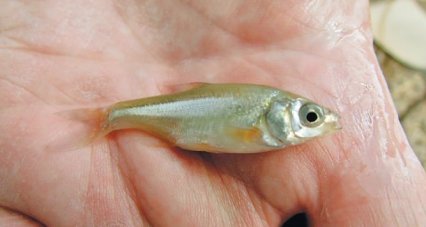 According to the report in ISRAEL21c, a first attempt to re-introduce 5000 of the bleak into the Yarkon River in 2002 was unsuccessful as although the fish survived, they didn't breed, possibly because there was a lack of spawning areas and shelter.

So with the aid of the Yarkon River Authority, the Nature and Parks Authority and the Environmental Protection Ministry, an experimental planted pond was built next to the river - and the fish which were introduced to this happily bred.

Following this, a number of sites in areas where the fish had previously existed in the wild were prepared to ensure they provided the right habitat and in the winter of 2006-7, the team from the University tried again, introducing 9,000 bleak into several rivers in Israel, including the Yarkon.

Now, after three or four generations, the species has increased in number significantly.