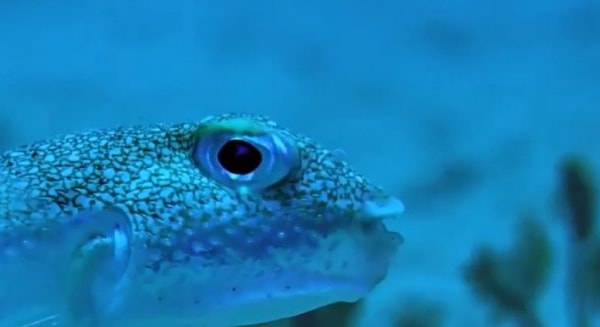 See the amazing underwater circles made by this male puffer fish to attract a mate.

The footage is being used as a promotional ident for BBC One alongside its swimming hippos and basketball players in wheelchairs.

This small 12cm/4.75in puffer, which was discovered relatively recently in waters off Japan, is believed to be a new species of the genus Torquigener. It can spend a week or more constructing these geometric circular structures 20-30m below the surface in order to attract a mate.

Up until the discovery of the puffer, the 'mystery circles', which appear on the seabed off the coast of Amami-Oshima island in subtropical Japan, had baffled divers for decades.

The puffer features in David Attenborough's new Life Story series, the first episode of which was shown last night. If you missed it, you can catch Episode One on BBC iPlayer.