A coral reef discovered in the coastal waters of Iraq has excited scientists as until now it had been thought unlikely that corals could settle in such an extreme environment.

Researchers from the Technical University of Freiberg, Germany stumbled upon the 28 km2 coral reef in the Arabian Gulf at the mouth of the Shatt Al Arabe (Euphrates and Tigris), while on training with colleagues from the University of Basrah, Iraq.

Although coral ecosystems occur in the coastal areas of most countries of the Arabian Gulf (Bahrain, Iran, Kuwait, Oman, Qatar, Saudi Arabia and the United Arab Emirates), no coral reefs were previously known in Iraq. Due to the high turbidity of the coastal waters through the tributaries of the Euphrates and Tigris, coral reefs could not be located using satellites.

"The discovery was a sensation for all of us," says Prof. Hermann Ehrlich , Heisenberg Professor for Biomineralogie and Extreme biomimetics. "Tropical coral reefs are an extremely sensitive ecosystem, normally occurring in clear waters, where the temperature rarely falls below 20°C/68°F. Here, however, there are variations in temperature from 14-34°C/57-93°F.

Along with large temperature fluctuations, the area is also characterised by high turbidity, high flow rates and large salinity fluctuations during the year, and is often polluted with oil and loaded with sediment. 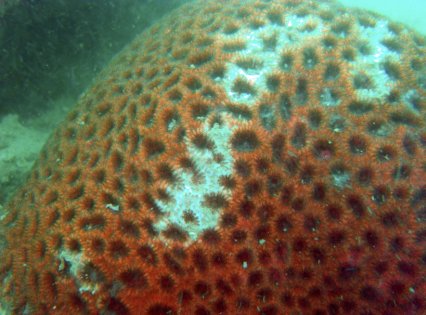 Visibility was low at just 90cm/3' or less, making studying the reef difficult for the team, but they found a fairly diverse ecosystem with a variety of hardy corals species and sponges.

Four of the identified coral groups in the reef (Platygyra, Porites, Goniastrea and Turbinaria) are among the most slow-growing species that are solid and robust enough to evolve and be able to survive under the harsh environmental conditions.

Further studies are planned in the spring and autumn of this year, to better understand the coral ecosystems in the specific climatic and environmental conditions. Against the background of global climate change, researchers say this this could provide valuable insights on how marine ecosystems can adapt to extreme conditions.

Given the intensive oil and gas development in the Gulf region however, they add that need the reef needs urgent protection.

The researchers report their findings in the current issue of Scientific Reports.