Dr Heok Hee Ng takes a look at the anabantoids â€“ a group that includes some of the best known fish in the hobby.

It’s not often that an aquarium fish is better identified by its scientific name than its common name. One such example is the fighting fish – Betta, or more specifically cultivated varieties of Betta splendens, the Siamese fighting fish.

Betta have been featured in everything from iPod speakers to computer wallpapers, yet are only a small part of the anabantoids, a group that includes 19 genera and about 120 species.

The Anabantoidei, also known as labyrinth fish, is a sub-order of the perch-like fish (Perciformes) distinguished from many others of the order in being able to take in oxygen directly from air instead of through water. This is achieved by a highly folded suprabranchial accessory breathing organ – the labyrinth organ – in the gill chamber.

This is an expansion of the epibranchial bone of the first gill arch and equipped with numerous small, highly branched blood vessels for aerial respiration. This function, via the use of the suprabranchial chamber, is not unique to the anabantoids though, as the feature has been independently evolved in the snakeheads (Channidae) and walking catfish (Clariidae).

Anabantoids are native to southern and eastern Asia, as well as much of Sub-Saharan Africa. Because of their ability to utilise atmospheric oxygen, you may think that anabantoids are usually found in standing bodies of turbid, oxygen-deficient water.

Nothing can be further from the truth. They are found in a wide range of flowing and standing habitats, with the notable exception of hill streams, because anabantoids are not strong swimmers and prefer areas with little or no current. 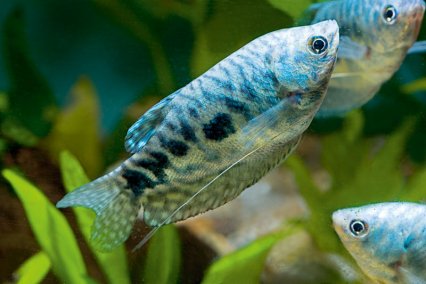 Many anabantoids are relatively undemanding of water conditions, so ideal for the general community tank. There are several points to note, however, when it comes to housing them.

Because of their lack of swimming strength the tank should not have a strong current. Their low requirements for dissolved oxygen obviates the need for strong power filters anyway.

Another factor is that for most anabantoid species their natural habitat is full of aquatic plants. Therefore, proper housing should include plenty of rooted and floating plants, as these would provide cover. Driftwood does not seem as important. Anabantoids are also good jumpers, Betta notorious, so a tight-fitting cover is essential.

Feeding for many anabantoids is also relatively easy. In the wild, diet consists largely of aquatic invertebrates, although many larger species will also eat small fish. One notable exception are the pikeheads, (Luciocephalus spp.), which are almost exclusively piscivorous.

Most anabantoids will adapt readily to flakes and pellets, although live or frozen food should be provided from time to time, if not exclusively, as they seem to fare better compared to those fed constantly with commercial foods.

Many anabantoids are relatively easy to breed in the aquarium, and the group can be divided into two kinds: those that lay floating eggs and those laying sinking eggs.

In both, brood care strategies run the gamut from none – as for the Kissing gourami, (Helostoma temminkii) – to those that build bubble nests, such as Dwarf gourami (Colisa lalia) or orally brood their eggs like

Getting anabantoids to breed may be as simple as ensuring that breeding pairs are properly conditioned and water temperature remains sufficiently high, typically above 25°C/77°F.

Aggression displayed by anabantoids towards conspecifics is well known, with the most famous example being those displayed between male Betta splendens.

This aggression takes the form of threat displays that eventually escalate to biting and wrestling with their jaws locked together.

Such behaviour usually means that you should not keep more than one male anabantoid in the same tank, but since it is usually only directed at male conspecifics except during breeding when the male parent may chase away all intruders, other tank mates face little danger.

Even though most anabantoids are relatively undemanding of water and nutritional requirements, not all are suitable for the beginner, as they grow too large for the average aquarium.

This would involve the four species of giant gouramis in the genus Osphronemus. They may also have more specialised needs with regards to water, such as Liquorice gouramis, (Parosphromenus spp.) and Chocolate gouramis, (Sphaerichthys spp.), or nutrition, like pikeheads.

Some of the best anabantoids 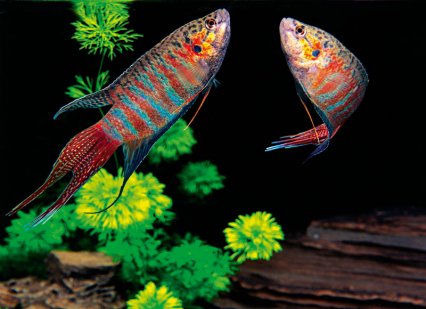 This is one of the few anabantoids that can be maintained comfortably in cooler water, as low as 10°C/50°F, which makes it ideal for an unheated tank. This species should be kept with other mid-sized fish as they might eat smaller ones. 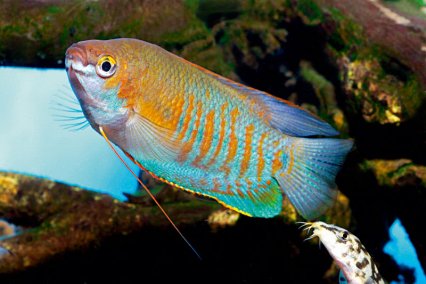 These are ideal for those starting out with the group, primarily because they are generally peaceful, tolerant of most water conditions and easily available in stores. 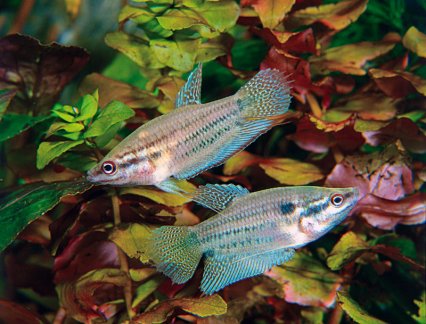 These are suitable anabantoids in a community tank of smaller fish. Males will make loud croaking noises, hence their name, during courtship and in agonistic interactions with other males. 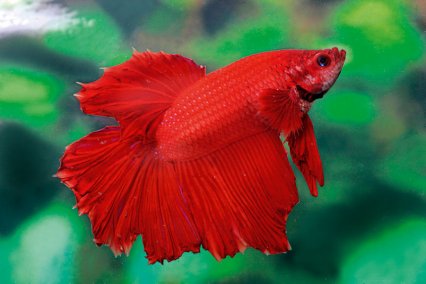 This is the largest and best known group of anabantoids with 66 species and counting, although the name ‘fighting fish’ is almost synonymous with only one species – Betta splendens.

Besides the Siamese fighting fish, other wild Betta species suitable for the beginner include the bubble-nesting peaceful B. imbellis and the mouthbrooding B. pugnax, although a few closely related species may be sold under that name. These wild species typically do best in soft, acidic water.

With their slow and stately manner of swimming and vibrant coloration, anabantoids provide a perfect counterpoint to the more frantic swimming of such as barbs and tetras.