Pupfish can go without breathing for five hours! 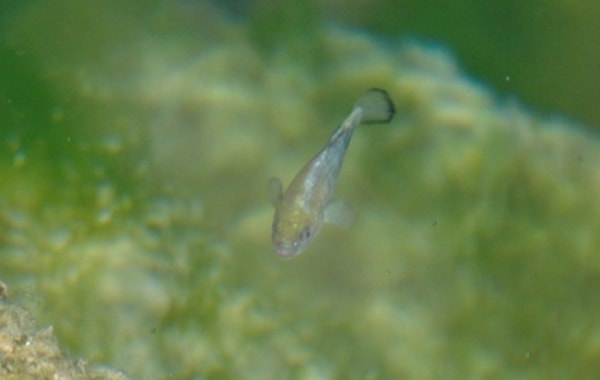 If you thought you could hold your breath for a long time, think again! The harsh environment of its natural habitat has caused the tiny desert pupfish to adapt in a surprising way - it essentially goes without oxygen for up to five hour stretches.

Researchers Frank van Breukelen and Stanley D. Hillyard from the University of Nevada, Las Vegas, study these small fish, which measure just 5cm/2in in length and call the warm springs near Death Valley their home. The alteration in the pupfish metabolism is an example of physiological plasticity, adjustments that organisms make to better function in the face of dramatic environmental changes. Unfortunately for the pupfish, their adjustments are allowing this endangered species to merely survive rather than flourish.

"The entire Southwest of the USA was much wetter in its recent past. Just 10,000 years ago, Death Valley was inundated by 100m of water and was called Lake Manley," van Breukelen explains. "When those waters receded, pupfish were isolated to their current habitats which mostly consist of warm springs. Essentially, these fish spent most of their evolutionary history in cooler waters until recently when the fish were isolated in waters as high as 35°C/95°F. It follows that the fish may not be well-adapted to those warm springs because there hasn’t been much time to evolve."

One coping mechanism that the pupfish have developed is to randomly cycle between periods of consuming oxygen and going without. During these periods of non-oxygen-based respiration (anaerobism), the fishes’ metabolism must work approximately 15 times harder, a surprising choice in habitats where food is scarce.

"There may be some detrimental aspects to using oxygen at these ecologically relevant high temperatures. Mitochondria are the primary site of oxygen use in the cell," van Breukelen says. Mitochondria are structures within the cells that convert energy from food into a form that cells can use to function properly. "Our data suggest the fish are shutting down their mitochondria in order to avoid production of reactive oxygen species (free radicals) due to the high temperatures. Using a metabolic strategy that is 15 times less efficient may not be ideal, but the cellular circumstances might demand its use."

The fish also produce ethanol, a byproduct of their anaerobic metabolism that feeds into their decreasing use of oxygen. "We think that fish produce some ethanol, which then fosters the closure of mitochondrial channels that allow for delivery of substrates, which further limits oxygen use."